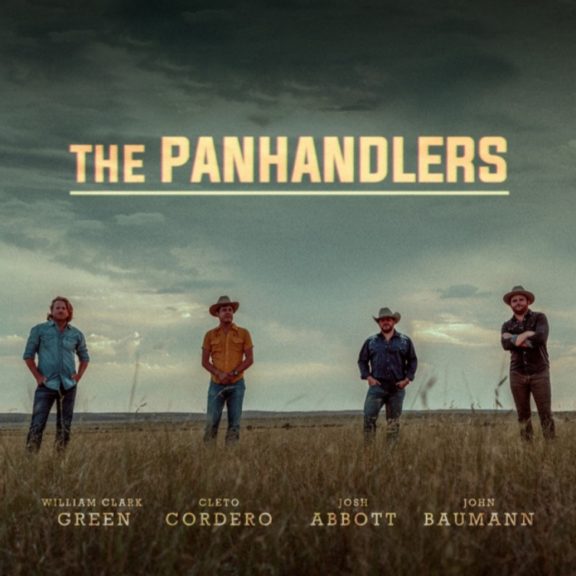 It’s a pretty well-known fact that Texas – proffering a sound characterized by fiddle, steel, and next-level songwriting – is a bastion of both tradition and fierce independence in modern country music. More so than many other places, Texas country songs soak up the geography and culture of the region, and the diversity incubating in the music scene there is another (most definitely worthwhile) rabbit hole to fall down if you’re so inclined. The latest progeny of Texas music tradition comes from Lubbock, TX in the form of The Panhandlers, who are stepping out on to the hallowed stage of the “supergroup” under the production oversight and/or genius of Bruce Robison.

The individual members of The Panhandlers – Josh Abbott, Cleto Cordero, William Clark Green, and John Baumann – hardly need an introduction within the Texas music scene. That being said, we wanted to give those of you who might not be familiar with that segment of country music an idea of who these artists are and why this particular supergroup is such an exciting collaboration.

Probably the most well-known outside of Texas, Josh Abbott is mainly recognized as the frontman, vocalist, and songwriter for Josh Abbott Band, which he formed over a decade ago with several of his fraternity brothers in Lubbock, TX. From his 2015 concept album Front Row Seat; to albums with multiple single-worthy tracks like 2010’s Small Town Family Dream; to the series of EPs, the most recent being April 2019’s Catching Fire (featured here), Abbott and his band consistently knock their releases out of the park by pairing searing fiddle and banjo with relatable lyrics and earnest delivery. Apart from a brief stint with Atlantic Records, Abbott and his band have put most of their music out independently on their own label, Pretty Damn Tough Records.

Abbott also hosts and headlines JAB Fest, a music festival that lights up a September weekend in Lubbock with some of Texas’ top live acts; past participants have included Whiskey Myers, fellow Panhandler William Clark Green, and Wade Bowen.

Originally from Midland, TX, Cleto Cordero’s dulcet tones can be heard fronting Lubbock-based Flatland Cavalry, whose most recent album Homeland Insecurity just made our album of the year list for 2019. Cordero has proven himself to be a top-notch wordsmith over the course of Flatland’s two studio albums, Homeland Insecurity and 2016’s Humble Folks, as well as their 2015 EP Come May.

His voice is unique in that that gives anything he sings an innate sentimentality and nostalgia, perfectly suiting the lyrics he crafts to hit you right in the heartstrings. On the other hand, he also adapts his vocals effortlessly to more rock-tinged songs like Humble Folks’ standout track “Devil Off My Back”. For more on Cleto Cordero, check out our features on Homeland Insecurity and “Sober Heart of Mine”, Flatland’s latest release which also happens to be part of Bruce Robison’s project, The Next Waltz.

Assuming that you’re coming from a place other than the Texas music scene, John Baumann is The Panhandlers’ hidden gem. He probably has the least national recognition of the four members, but that in no way means that he’s not deserving of it.

Baumann currently has two studio albums, High Plains Alchemy (2014) and Proving Grounds (2017). Proving his songwriting chops, one of Baumann’s songs off High Plains Alchemy, “Gulf Moon”, was cut by none other than Kenny Chesney on his 2018 album Songs for the Saints. Proving Grounds is an incredible album as well, showcasing Baumann’s knack for storytelling and ability to dive into deep subjects in a way that truly captures the emotion of the situation. He has also released two EPS, Departures (2015) and West Texas Vernacular (2012). Like Flatland Cavalry and William Clark Green, Baumann also has a cut on Bruce Robison’s latest Next Waltz album: his own version of Robert Earl Keen’s “Love’s a Word I Never Throw Around”, released December 2019.

All in all, there’s no doubt that Baumann belongs among Texas’s elite songwriters. His sound changes a little with each project he releases: reminiscent of a light and airy Robert Earl Keen or Guy Clark in some places while moving to a more somber, introspective tone in others. His down-to-earth style and simple instrumentation exude authenticity and make his music well worth a careful listen.

Joining The Panhandlers fresh off the November 2019 release of his Live at Cheatham Street Warehouse album (read our take on it here) William Clark Green is one of those artists who keeps getting better and better with every project he releases, even though they all seem impossible to top.  We’ve had him on our podcast (listen here) and his 2018 album Herbert Island made our list for the top albums that year.

It’s hard to isolate one particularly striking quality of Green’s music, for all of the best reasons. His lyrics are truly the heart and soul of everything he puts out, weaving portraits and stories whose tendrils grab on to listeners from the very first note. Apart from being a talented songwriter, Green’s vocals give every song a life of its own, regardless of what the track’s sonic profile may be.  He can drop his voice down to match the growl of “Ringling Road”, form a staccato backbone for the Cajun-seasoned swing rock of “Hebert Island”, and then effortlessly launch into the clear, soaring notes of “Wings”(and those are just a few examples of the versatility he demonstrates over the course of his five studio and two live albums).

Green also hosts and performs at Cottonfest – a three-day music festival in Lubbock that benefits the High Cotton Relief Fund while pairing camping, a cook off, and other events with some of the best acts Texas has to offer (Whiskey Myers, Flatland Cavalry, John Baumann, Ross Cooper, Koe Wetzel, and Shane Smith & the Saints have all performed in past years).

Bruce Robison and The Next Waltz

Even though he’s in a production role, it would be hard to talk about The Panhandlers without talking about Bruce Robison. A native of Bandera, TX, the singer/songwriter has been in the music business for decades and has had his songs cut by The Dixie Chicks, George Strait, and Tim McGraw, to name a few. Most recently, however, the buzz surrounding Bruce Robison has been regarding his record label, The Next Waltz.

Over the past couple years, Robison has put out two albums that are different than anything else out there in the country music right now. The Next Waltz Vol. 1 and Vol. 2 are collaborative albums that focus on the relationship between individual songs (both covers and originals) and the artists that bring them to life. The collective nature of these projects makes Robison a natural fit for a supergroup like The Panhandlers, and his process of cutting songs straight to tape gives each track a natural vintage character that couldn’t be more fitting for Cordero, Green, Abbott, and Baumann.

In a nutshell, The Panhandlers are simply a group of supremely talented storytellers with varying styles. We already have an idea of the caliber of music Cleto Cordero and William Clark Green can put out together thanks to “Coyote”, a track they collaborated on for Flatland Cavalry’s 2016 album Humble Folks. Josh Abbott will bring his signature warmth and energy to the group, while Baumann lends more of the dust and gravel, down-to-earth elements. This can all be heard in “No Handle”, the first single off their new album that’s set to release on March 6, 2020. While they just recently made their debut live performance at The MusicFest in Steamboat Springs, Colorado, we can’t wait to see what they do next as far regarding live performances.