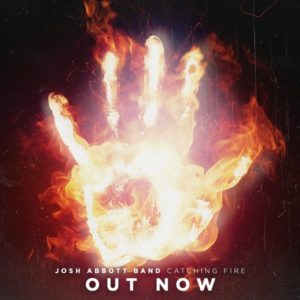 Anticipation has been building since Texas country staple Josh Abbott Band wiped their Instagram in order to announce their latest release, Catching Fire, in May. Now that the whole thing is here, there’s really one main takeaway – this EP is an instant good mood. Friends, family, and new beginnings form the backbone of the four-track record from JAB’s own label, Pretty Damn Tough Records.

The first track captures one of those perfect summer nights: crickets singing, trees swaying, a porch swing, and the sound of your favorite record floating out into the night air. Some might ask, what more could you need? JAB’s catchy answer to that question in “Little More You” has already become one of their most popular songs on Spotify in a little over a month since its release.

The personal nature of the entire EP quickly becomes evident in the second song “Surprise Surprise,” calling out banjo player Austin Davis and referencing Josh’s “instant chemistry” with his wife as well the birth of his daughter. The title track “Catching Fire” follows this tone, with Josh’s earnest vocals guiding you along his path of self-reflection.

Featuring Preston Wait’s upbeat fiddle intertwined with lyrics penned by Erik Dylan and Greg Bates, the EP’s third track, “Oughta Get Drunk”, should land a permanent spot on your tailgating playlist. Songwriter Dylan, who is really close friends with JAB, couldn’t be happier with the way the song turned out; “Josh and Preston called me one night and said they needed a fun drinking song. I had written “Oughta Get Drunk” with Greg Bates a couple years ago and sent it right over. It was a no brainer. They crushed it!” Even on your first listen, it’s hard to disagree with his verdict.

Whether you’re looking for songs with meaning and substance or simply for some feel-good additions to your summer soundtrack, Catching Fire lends itself equally well to both situations. Catch Josh Abbott Band out on the road at one of their upcoming shows (find tour dates here), or keep up with them on Facebook, Instagram and Twitter.