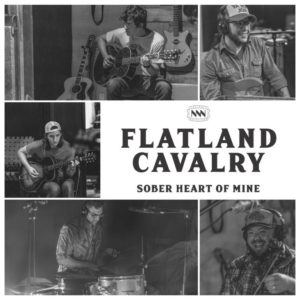 Often a song can take as few listens to truly interpret the entire meaning of a track. But the new Cleto Cordero penned track by Flatland Cavalry gets right to the point lyrically. It tells the tale and feeling of the freedom that comes with that liquid courage so many often lean on for social or other reasons. It starts out ” Well If I could I would, stay drunk all the time, but then again I’d never ever get to know this sober heart of mine. All of my friends would be shadows, leave me alone at closing time, my tab would be real high and I would feel real low when they turn down all the lights.”

The problem with using a crutch to ease your pain is that sometimes you never truly heal the way you are supposed to. Everyone has their vices and on this song Cleto explains the inner struggle involved with numbing the pain of life and the eventual realization that you have to come back to the real world and face things with a clear mind.

But the lyrics aren’t the only thing special about this track.  The song sounds dizzying and wompy in a way that you almost feel drunk nodding along to the tune. That additional layer or musical craftsmanship takes this song from good to great.

The song’s message is clear, the tone sad, but with such a whimsical melody and arrangement that the song seems almost playful in nature, though lyrically it is honest and full of stark realities.

Cleto keeps proving himself time and time again to be one of the top songwriters in Country music regardless of what postal code you call your home.

Give this one a few listens and see if you got the same feeling from it we did.

“Sober Heart of Mine” was released as part of The Next Waltz: Volume 2, that has some other Red Dirt powerhouses on it as well (Evan Felker and William Clark Green have released tracks already)

Excellent track, the vocals and musicianship are KILLER!

Glad it’s being included on Volume 2