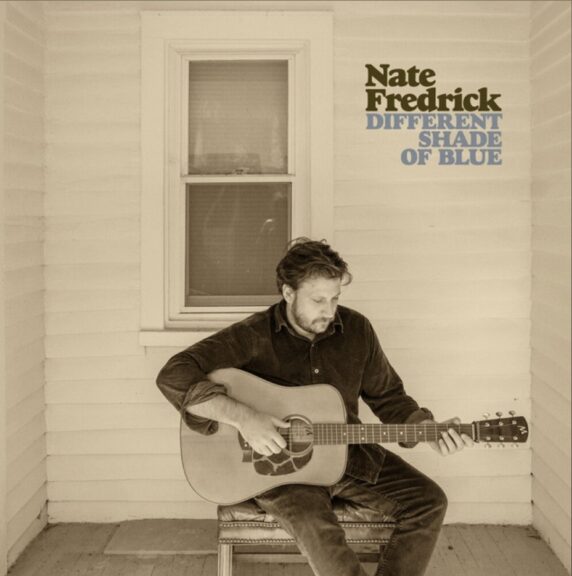 It’s no secret that Missouri native and current Nashville resident Nate Fredrick has been on our radar for a few years now, with a 2019 interview, his first release of “The Dreamer,” and the premiere of his recent single “Paducah.”  Somehow, though, even with a full awareness of what to expect from Fredrick and his music, his new album Different Shade of Blue still has the ability to stop you in your tracks. It’s one of the rare albums where each piece is equally good, making for a truly cohesive project where your favorite song is the last one you listened to (until you hear the next one, that is), making it nearly impossible to pick a standout.

Different Shade of Blue is first and foremost a country album, but its bluesy edges, steel guitar flourishes, and Van Morrison-style airiness make it unlike anything else in the genre at this moment in time. This distinctive sound is the product of the efforts of Jon Conley (electric guitar), Tim Denbo (bass), David Dorn (piano/keyboards/production), Aaron Rochotte (drums/percussion), Rusty Danmyer (pedal steel), Scotty Murray (dobro), Qunicey Meeks (harmonica), Meg Mcree (violin), Julia Fisher (violin/viola), and Matt Daniel and Harper O’Neill’s background vocals. The project was recorded at Farmland Studios, engineered by Caleb Fisher, and mixed/mastered by John Behrens.

It may appear to be stating the obvious to say that Fredrick’s voice and this album were made for each other, but it’s true: warm and caramel-smooth with a top coat of raspy patina, his vocals convey a world of emotion without weighing any of the songs down. For example, “All Over You Again” and “Love Someone” both wade through the pain, loss, and helplessness of failed romance, tackling heavy topics while still remaining incredibly easy on the ears. In that same way, the upbeat, springy tempo of the title track belies its tinges of sadness: “is this the greener grass I’m standing on/on the other side of you/cause it’s turning me a different shade of blue.”

Between “if you’re lazy and you’re looking to get something done, baby let me be the one” in “Be The One” and Fredrick’s “but a man can dream, can’t he? Damn right he can” in “The Dreamer,” the lyrics often have a charming, wink-and-a-grin style of humor that gives the album an authentic, conversational feel. “Long Overdue” opens in the same way (“oh the best thing about being friends with a girl with a shitty boyfriend…”) but gives way to a genuine look at a long-awaited love and the tender moments that result.

“Somewhere in trying to figure out how to craft a good song, I figured out how not to just write a pile of sad songs,” Fredrick explained. “It’s not that my situation is different or even better, but I’ve found a different way to perceive my personal circumstances.”  Like Fredrick says, perspective and introspection play a large role in the songs on Different Shade of Blue as it explores different types of relationships from various angles. The relationship between a person and their “home” comes into focus through the wistful early-morning fog of “Paducah,” while fingerpicking acoustic guitar sets a nostalgic backdrop for the idea of knowing when to let go in “Patches” (“I guess that’s the way it goes/some things you can fix ‘til they just stay broke”).

The distance between someone and what they can’t have comes into play in a handful of tracks as well. Between swells of the infectious chorus, Fredrick delves into the spoken-word delivery of classic country greats in “The Dreamer” to recount an across-the-barroom infatuation. The moan of a harmonica plays into the sense of longing in “Caroline,” where Fredrick describes the kind of person that lingers in the back of your mind as the standard everyone else can’t meet: “if there comes a day when the stars align, I’m gonna take that girl/gon’ make her mine/oh it’s too easy to see, that there’s everyone else, and there’s Caroline.”

As such, the lyrics themselves play a major role in the authenticity that emanates from every corner of this album; it’s obvious that Fredrick didn’t pull any punches when selecting his co-writers. Reading like a veritable who’s-who of rising talent in Nashville, the album credits include Ryan Nelson, Matt Daniel, Ben Chapman, Matt McKinney, Vinnie Paolizzi, Chad Bishop, Harper O’Neill, and Joybeth Taylor. “I was lucky enough to be surrounded by people who were willing to grow together,” Fredrick says of the writing process. “It’s a culmination of the best I could give with a bunch of people who are now my best friends.”

Over the course of Different Shade of Blue’s eleven tracks, Fredrick ambles through years of introspection and growth, sweeping listeners along with a simultaneous tide of languid ease and undeniable energy. While some albums have a single, distinctive element that steals the spotlight, Different Shade of Blue isn’t one of them. The vocals, songwriting, and instrumentation all form the soul of this album, which, to put it simply, is the real deal. If the strength of this project is any indication, the trajectory of Nate Fredrick’s career is only up from here.