Nearly a year after putting out their last single, Gannon Fremin & CCREV are back with an explosive new single in “Pick Me Up”, written by frontman, vocalist, and guitar player Gannon Fremin. While their brand of red dirt rock had a throwback sound with their last two singles (Texas Local Live called them “heir to the red dirt throne”), the Oklahoma group has adopted a heavier rock sound for their new release. This time around, Fremin and his band have come out with a fusion of rock and red dirt that will knock you out of your seat and probably melt your face while they’re at it. 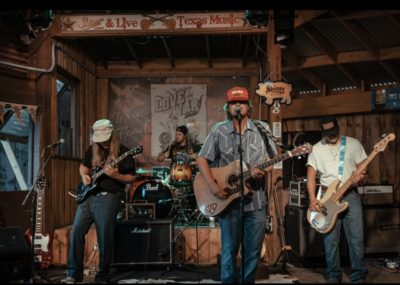 Speaking about the track, Fremin said “It’s one of my favorite tunes, it’s got a good message and it’s heavy.” That heavy sound is the work of bass player Wade Cartwright, lead guitarist Travis Julian, and drummer Tyler McCartney, who give this track the momentum of a runaway train and set the stage for a chorus that begs listeners to turn up the volume.

“Pick Me Up” starts off at a simmer before devilish guitar licks and equally brawny drums meet head-on to put force behind Fremin’s confession to a two-timing lover he’s outgrown anyway: “I know I can’t stop what gets down in my veins/this guitar’s the only love I’ve ever found/but I’ll sleep alone, baby I got my sound”. Fremin’s vocals continue cut right to the heart of the matter, telling her “I can’t let you stand in my way/so I’ll sing until I just can’t stand no more/then they’ll pick me up off the floor”.

The new sound Gannon Fremin & CCREV flaunt in this new single is gritty, raw, and packs a resounding wallop, which seems to be a skill that producer Taylor Kimball has honed through his work with other rising stars in the Texas/Red Dirt scene. Other projects of his have included work with Koe Wetzel, Read Southall, and Giovannie Yanez (Giovannie & The Hired Guns).

Overall, “Pick Me Up” has a rocking, in-your-face swagger that only pushes Gannon Fremin & CCREV further on a rising trajectory. This group will definitely be one to watch in the near future, so give the track a listen below and make sure you follow them on Facebook, Instagram, and Twitter to keep an eye out for any new developments.