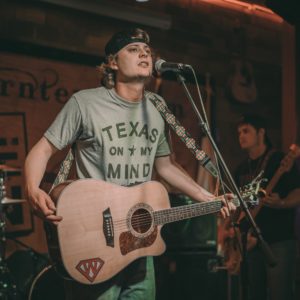 “Lesson’s Learned” is the second released single by Gannon Fremin & CCREV.   It brings a type of energy that Oklahoma music has been missing and is right on par with what the Texas music scene has been putting out the last 18 months.  It will not take long for a tune like this to start cranking out streams on Spotify and radio.

Gannon wrote “Lessons Learned” while visiting Northern Oklahoma. The inspiration for the song came about like this…

“A friend of ours had been talking to girl for over a year that never would meet up with him. He told us he had a girlfriend and none of us believed him.  He kept going on and on about how everything was legit, and it was a serious relationship. As time went on, he got worse and worse off about it. We all tried to tell him things weren’t going to work, but he wouldn’t listen. So finally, I sat down and put my feelings into words about the whole situation. She claimed she was coming to a ton of shows. That’s why I wrote the line “another place, another town, just burned”. We could not talk him out of her. We recorded the song in Denton TX at Rad Dirt studios with Taylor Kimball, who has produced the sounds of Koe Wetzel, Read Southall and Giovannie Yanez.”

With a sound reminiscent of some of Red Dirt’s greats, a rocking live show and songs that are sure to Garner mass appeal, Gannon is one of the artists we plan to keep the closest eye on not only in Texas, but in the country scene in general.

Gannon and the boys will be throwing their single release party at The Dog House in Marlow, OK.  It is sure to be a barn burner! They are also honored to have Raised Rowdy as the exclusive single release platform for their new tune and appreciate their support of the up and comers!