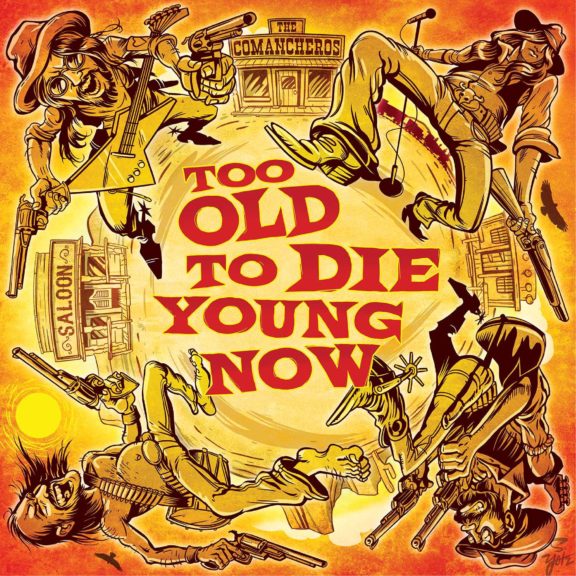 Two years after the release of their first album, the Missouri-based Comancheros have effectively blasted a hole in the outlaw music scene with the release of their sophomore album Too Old to Die Young Now. Proprietors of the Heavy & Western clothing line, The Comancheros use that phrase to describe the distinctive style of their music; it was the title of their first album and shows up again as the title of one of the tracks on Too Old to Die Young Now. While the standout track falls at the end of the album, it sets the tone for the whole project, falling somewhere within the unlikely junction of raucous, steel-plated metal/rock, 70s roadhouse country, and the galloping pace of a spaghetti western soundtrack.

On the surface, this may sound like an odd grouping of sonic profiles. As the album progresses, however, the low-slung guitar riffs, brawling drums, and cast iron vocals strike a balance with themes and lyrics that reflect traditional country/western motifs. We premiered the video for the opening track, “Train Bridge”, a few months ago and you can read about that in more detail here. The second track “Caffeine, Nicotine, and Weed” is a high-powered romp that launches into a rollicking tale of hard living and barely scraping by, complete with a solo from Tony Martinez (Whitey Morgan & the 78s).

Continuing to put their own spin on classic country themes, the Comancheros chronicle a relationship’s downward spiral in standout track “Down in Flames”, working in grungy instrumentation with some help from The Cadillac Three’s Kelby Ray for a face-melting effect. In that same vein, “66185” is a nod to tradition as well. Featuring guest vocals from Billy Don Burns, the title is a reference to the inmate number in Johnny Cash’s infamous 1965 mugshot and the lyrics are dotted with references to the Man in Black, citing a place where “the angels sing in baritone”. “Bow and Arrow” (featuring a solo from Daniel Donato, who’s an otherworldy guitarist in his own right), “Crazy as Hell”, and “Comanche Brave” continue on to fill out the rest of the album’s rock-tinged outlaw swagger.

Nonetheless, the Comancheros aren’t afraid to throw their listeners some curveballs. Slowing things down is the surprisingly reflective “A World That Moved On”, which was written solely by Tanner Bryce Jones, as well as an instrumental cover of the beginning of “Amazing Grace” that’s constructed with dive-bombing guitar licks. These additions round out the album, which paints a clear picture of who the Comancheros are as a band. Drummer R. Mike Cook told us, “This album is finally a good look at what we do. It was recorded live in a big open room, all together. We set up a studio in a lake house Monday and had our record, and a hangover, by Sunday morning. We fucking love the songs, it was fun to record, and we can’t wait for everyone to hear it. We’re too old to die young now, so we might as well live it up.” Too Old to Die Young Now was produced by Jon Deere Green and the Comancheros band members which include Tanner Bryce Jones (vocals, lead guitar), Bradley Hutchinson (vocals, lead guitar), Kyle Imgarten (vocals, bass pedal steel), and R. Mike Cook (drums, percussion).

Over the course of Too Old to Die Young, the Comancheros prove that their fists-flying, rough-around-the-edges sound can be just as alluring as it is aggressive. There truly isn’t a single skippable track on this album, and there’s more than a few that will have you reaching for that repeat button. To stay updated on current happenings, follow the band on Facebook, Instagram, or their website, and give the new album a listen below.