If you had to describe the band The Comancheros in a few words it would end up being something similar to HEAVY and WESTERN. Funny enough, that was the title of their debut album that was released in late 2018.  Also, they may own a little brand by that same name that you can check out HERE. The boys come from the Rock and Roll world in Missouri and merged their Rock/Metal background with the musical stylings of the greats of the Outlaw Country music scene to create a sound spectrum that is totally their own. 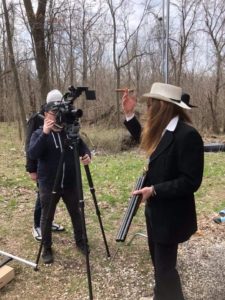 The video premiere we are bringing you today is for their newly released single, “Train Bridge”. The music video is a continuation of the story they started with the “Time Machine” video. The guys had so much fun with Jay Pelzer at Tag Production Studio that they had to keep working with him. This is part 2 of their video series. Click that “Time Machine” link above to view the original video. That should give you a good base to see why

Drummer R. Michael Cook told us “Tanner and I write most everything the same way; I write the lyrics and he writes all of the music. This song is really special to me because it is about my home. I grew up in Biggsville, Illinois right next to the train bridge. With a population of 350, there wasn’t much for kids to do. All of the teenagers would come to my yard and hang out under the train bridge. That’s where everyone made out, drank and smoked their cigarettes away from their parents.”  Sounds like a Raised Rowdy kind of party to us.  Small town life, with some good times, shared with the folks that mean the most to you.

Their sophomore album, “Too Old to Die Young Now,” will release in early 2020 with guests ranging from The Cadillac Three, Billy Don Burns, Daniel Donato, Tony Martinez from the Whitey Morgan band and John Schreffman from Shooter Jennings.  So YEAH, that is something we are going to be awaiting with much anticipation.

Until then keep this video on repeat and give their catalog a listen to get some Heavy and Western music flowing in your veins.