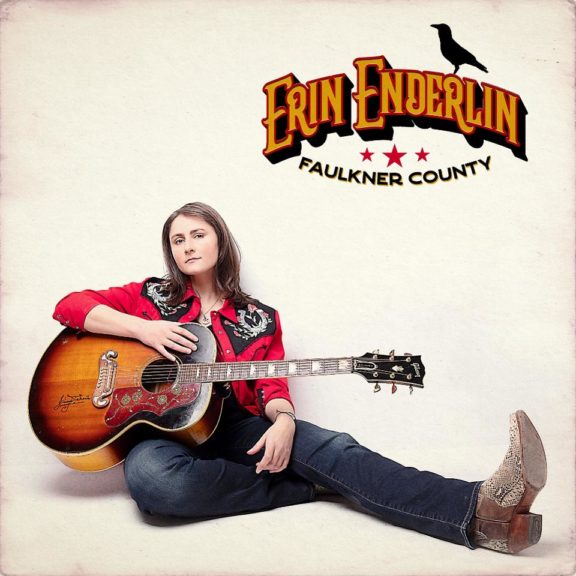 We’ve said it before and we’ll probably say it again – Arkansas native Erin Enderlin is simply in a league of her own when it comes to crafting modern sad country songs. Her newest album, Faulkner County, only serves to solidify her position as a torchbearer of traditional sound in today’s country music scene and adds to an already-impressive list of accomplishments (for more about her influences, background, and recognition check out our interview here). The 14-track album was produced mainly by Jamey Johnson and Jim “Moose” Brown, with some of the songs previously released as part of a series of concept EPs dropped throughout 2019.

“I hope listeners get lost in it”  Enderlin says of the album, “ I hope they get so into these characters that it’s like reading a favorite book – you’re there in that story , and you forget whatever is going on in your life.” These words breathe life into the stories she tells in Faulkner County and its literary approach to storytelling. Some of the characters reappear in different songs throughout the album – for example, we previously featured “Broken”, “Till It’s Gone”, and “Tonight I Don’t Give a Damn” which focus on the same woman  – framing songs as a series of moments or chapters in a person’s journey and making listeners invest in each tale as Enderlin tells it.

Thematically, Faulkner County covers some heavy material through an honest and unflinching lens, focusing more on the “downs” of life rather than the “ups.” “One of the best things about country music is that it was adult music” Enderlin offers, “It was real music that dealt with hard issues in life so that people going through those things don’t feel so alone.” In “Hometown Jersey”, Enderlin and co-writer Steve Leslie take the idea of the hometown, a familiar archetype in country music, for a completely fresh spin as the track follows a “glory-bound” favorite son and the unfortunate circumstances of his return home. Turning the idea of a homecoming on its head, “Run Baby Run” features soaring vocals from Enderlin and Melonie Cannon as the narrator urges a loved one to escape a worn-down, futureless town. “A Man with 18 Wheels” marks an upbeat, guitar-accented departure from the rest of the album, as does the swanky piano in nostalgic “Queen of Marina Del Rey.”

The striking harmonies between Enderlin and other artists on several of Faulkner County’s tracks are notably well-done, adding to the richness and depth of the album’s sound. The silvery, forlorn quality of Enderlin’s vocals pair with the velvet of Dillon Carmichael’s voice in “Whatever Gets You Through the Night” to reassure the lost and alone: “when it comes to being lonely there ain’t no wrong or right/whatever gets you through the night.” Cody Jinks’ reverberating background vocals shadow the chorus in “Hell Comin’ Down”, a getting-over-heartbreak ballad written by Enderlin and Ryan Tyndell. Enderlin also enlisted Vince Gill and Allison Krauss for “Sweet Emmylou”, an ode to music’s ability to carry people through the hard parts of life penned by Rory Feek and Catherine Britt.

While songwriting is the heart and soul of Faulkner County, the details in the instrumentation are also an integral part of the emotional capacity of the album. In the sad songs, pedal steel adds to the visceral ache of whatever emotion the particular track conveys. “Use Me Again” in particular features yearning fiddle and mandolin (courtesy of Jenee Fleenor) that mirror the track’s resignation regarding a complicated love triangle.

All in all, Faulkner County doesn’t have a single skippable track. Each song takes on a life of its own through the characters created by Enderlin and her team of co-writers, skillfully exploring the darker ends of the spectrum of human emotion. The album’s gorgeous melodies easily carry the emotional weight of the lyrics, creating a compelling set of narratives that grab on to listeners and make this album unforgettable in the best way possible. If you like what you hear, you can order the album here, check out Enderlin’s upcoming tour dates, or follow along on Instagram to stay updated on current happenings.