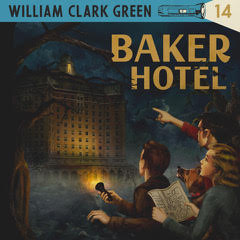 As one of the most genuine and versatile voices in the Texas scene, William Clark Green has set the bar high when it comes to the projects he releases. Over the 15 years he’s been active, Green has left his signature on independent country music with six studio and two live albums, all of which take on a life of their own the moment they begin to flow through a speaker. From 2013’s Rose Queen to his newest album Baker Hotel, Green creates records that experience the full spectrum of human emotion and feel raw and alive in a world where gloss and polish are often liberally applied.

Thematically speaking, Green is an artist that can truly do it all. Baker Hotel kicks off with “Feel Alive,” a jangly and fast-paced tune that mirrors the frustration of being stuck in one place while life passes you by. This is perhaps a product of the context in which Green dreamed up this album. While touring slowed down in recent years, Green, like many other artists, had more free time (and time to think) than before. “What this record means to me is self-reflection, realizing that I just turned 35 and it’s like, ‘Where am I at in life? Where do I want to be? Where did I think I would be?’ Not being able to work [during the lockdown], I had a lot of time to sit and think about myself, and what’s really locking me down, and that’s what I think this record is about,” the Flint, Texas native explains.

It’s a sentiment that shines through in songs like “Leave Me Alone,” where mandolin, guitar, and a catchy chorus soften the edge of exasperation that sometimes accompanies a thorough soul-search:

Maybe it’s time you should find advice from someone else

Here I go on 36 still arguing with myself”

Named after an abandoned (and supposedly haunted) hotel that looms over the town of Mineral Wells, Texas, Baker Hotel finds Green working through ghosts of his own. The album’s songwriting often features a protagonist plagued by his past, from “Give A Damn” (I swear this windshield/feels more like the rear view mirror/looking back at time/as the miles roll on by) to the country-rock of “Love to Hate.” The album closes with an absolute knockout of a track, “Me, Her and You,” where the specter of an old flame burns just bright enough to cast a shadow over a new relationship.

Sonically speaking, it’s an intriguing album. Rachel Loy’s production shines as it moves from searing rock riffs to the more delicate, stripped down arrangements that allow Green’s warm, raspy vocals to take center stage (“Getting Drunk,” “Anymore”). Green and his backing musicians manage to capture the same lighthearted, yet vaguely menacing vibe that “Ringling Road” has for the title track, which tells a story befitting the album’s Hardy Boys-inspired cover.  It also features Southern-rock leaning tracks like “All Pot No Chicken” and the country-funk humor of “Dog Song.” Baker Hotel, like Green’s other albums, is refreshingly varied and has its own distinct sense of personality.