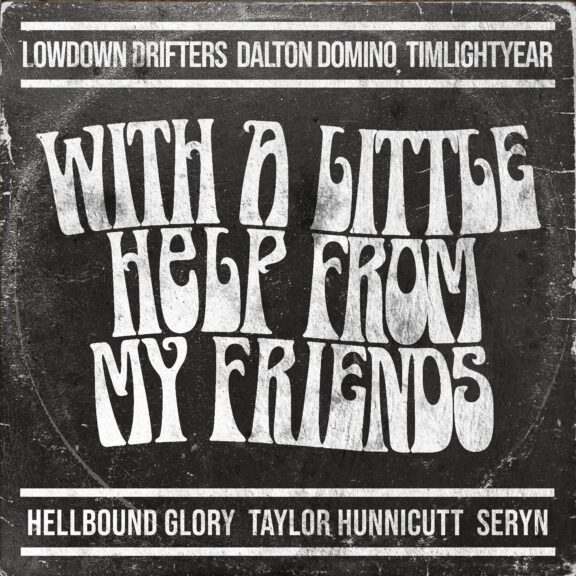 “I get by with a little help from my friends” – it’s a phrase that probably plants you squarely in 1967, somewhere between Ringo Starr and Sgt. Pepper. A country-folk-rock band from Stanwood, Washington is likely the last thing on your mind at that point, but the Lowdown Drifters and their friends may just change that with their new EP With A Little Help From My Friends. Over the course of four songs, the collaborative efforts of the Drifters, Dalton Domino, Tim Lightyear, Taylor Hunnicutt, Leroy Virgil of Hellbound Glory, and Seryn (among others) make for a high-powered EP that has a little something for everyone.

Kicking things off, Leroy Virgil’s “Malt Liquor” is a world-weary yet optimistic ode to cheap booze and making the best of the hand you’re dealt.  Textured yet smooth, his roughout vocals lend a sense of warmth to the track that authenticates the gratitude present in the lyrics:

“And I ain’t got a lot, still I gotta give thanks

Cause Lord, at least I’m rich in my mind”

Even though the protagonist seems to be at rock bottom, he still has people around him that can pitch in. This sense of community ties into the collaborative nature of the EP as a whole and is highlighted as other voices join Virgil’s for the chorus, blending together to appreciate how a good night has the ability to put life on pause for a moment:

“Way down by a river drinking malt liquor

In the moonlight watching fireflies flicker

Down by a river drinking malt liquor tonight”

After hearing the magic that the Drifters and Dalton Domino made together in last year’s single “Give Up On The Dream,” it comes as no surprise that they hit this version of “Instead We Sang” out of the park. This project swaps the stark intimacy of Feverdreamer’s acoustic version for a rumbling instrumental undertow to give the song a darker, more dramatic disposition. Domino’s voice retains its characteristic brightness, and the solitary whistle from the original still floats between each verse, but this time those elements are lingering just above ominous guitar riffs that build in intensity as the song goes on. The contrast here feels like that last ray of sunlight that cuts through gathering storm clouds, striking a balance between urgency and intrigue to keep listeners hooked from the very beginning.

“Fire in Her Eyes,” which has amassed over two million streams on Spotify since the 2019 release of Last Call for Dreamers, is currently the Drifters’ biggest song; it goes without saying that it’s a special track. Even so, the addition of blues-rock instrumentation and Taylor Hunnicutt’s powerhouse vocals on this EP make for an end product that’s so good it almost feels illicit. The original version’s aura of mystery, power, and irresistible appeal is amplified as the voices of Hunnicutt and Big John Cannon play off each other, his growl and her sultry rasp weaving in and out through the verses and chorus:

She’s a wild horse, you couldn’t break her if you tried a million times

So don’t get burned by the fire in her eyes

Cause few will know about the secrets that she hides”

Capping off the project is “Alright,” which the Drifters released as a single a little over a year ago. Big John Cannon wrote the song from his experience as both a long haul trucker and a musician (you can read the full story behind “Alright” here).  The EP version of this track is subtly different from the original, featuring instrumental arrangements that put the focus on Cannon’s story.

With A Little Help From My Friends, as a whole, exudes the same energy that’s in a good live performance – one where you can tell that the band is genuinely having fun on stage and each song takes on a life of its own. Throughout the EP, the music itself shares the spotlight with the lyrics and vocals; it’s worth a second, separate listen just to pay attention to that specifically. In “Fire In Her Eyes” and “Instead We Sang” particularly, standout guitar pieces take each song to the next level.

Make sure you follow along with all of the talented artists involved at the links below: