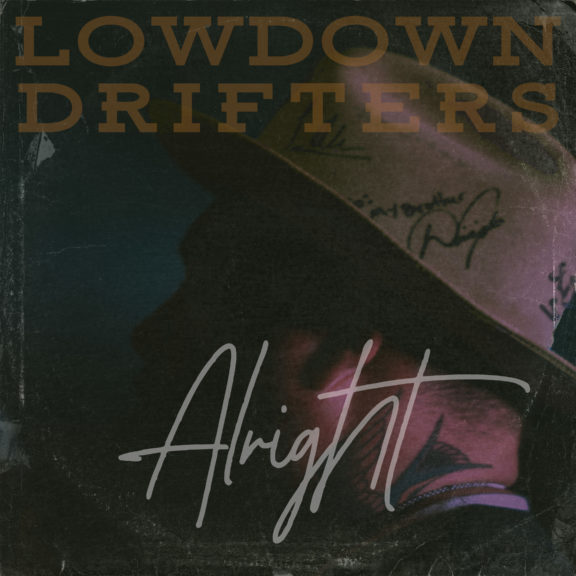 On May 22, The Lowdown Drifters are releasing “Alright” as their first new music since their 2019 album Last Call for Dreamers. The Washington-state based country-folk-rock act has an original sound that’s earned them slots playing with artists like Shane Smith & The Saints, Jason Boland, Stoney Larue and Chris Knight over their years of touring. Formed in 2015, they’re a four-piece group composed of guitar player Ryan Klein, Darin Jones on lead guitar, Richard Williams in the rhythm section, and lead singer “Big” John Cannon.

As the sole writer, Cannon penned “Alright” to illuminate the perspective that he gained from both a decade spent as a long-haul trucker and time on the road as a musician. Giving an authentic and unflinching look at Cannon’s personal demons, the slow-burning single exposes the loneliness, sacrifice, and isolation that can accompany chasing down a dream: “If that sun comes up tomorrow, and I have another day/ I guess I’ll do my best to chase these demons away”.

Speaking about his inspiration to write this song, Cannon explained: “Alright comes from a dark place, we had been touring and living harder than usual, when I ended up in the ER with heart palpitations from fatigue and everything else that goes along with what you do to make it through some of those late nights. That experience made the reality of the consequences associated with the life I had been striving for really hit home. Sometimes when you love something and want it so badly, you can turn a blind eye to the parts that you hate until they make themselves impossible to ignore. Music can feel like gambling the way it draws you in, getting hooked on the highs and so numb to the lows that breaking even feels like a win. There is a part of the song that talks about the necessity of going into cities to play the music we love and when you do, the business of that life seems to stifle creativity and make it feel like a chore rather than the true opportunity that it is. There is no greater feeling than when we are able to connect with people on the level that only music can in those environments because it creates such a shift in perspective from the rat race to a real sense of emotion. Overall the song encompasses the way that the decisions we make to follow our dreams allow us to get to a place where no amount of time spent or hardships faced deter us from the goal. This is something I think a lot of people can relate to in every walk of life, seeing their aspirations in a realistic light, weighing the costs, and deciding to persevere on.”

“Alright” paints each verse as a tableau; Cannon’s narrator stands as a solitary figure alone with his thoughts, surrounded by the ocean, crowds, and suffocating empty space. The rumble of his husky vocals give the single a grungy cast, while Jenee Fleenor’s violin laces through understated acoustic guitar to form the bedrock of the track. The Drifters also featured Ben Hussey (American Aquarium, 6 Market Blvd.) and Drew Harakal (Cody Jinks).

Ultimately, “Alright” puts a bold underline on the fact that simple vulnerability can sometimes make the most powerful statement. “Alright” will be available wherever you can buy or stream music on May 22, but you can listen to the single today exclusively here at Raised Rowdy. You can also check out their website or follow The Lowdown Drifters on Facebook, Instagram, or Twitter to keep up with the band’s current happenings.