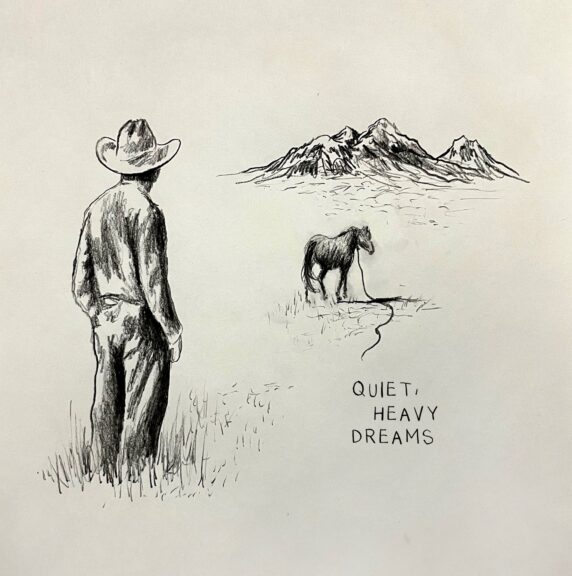 Considering that his first two albums drew numerous comparisons to Evan Felker, Jason Isbell, and Tyler Childers, the bar was already set high for Zach Bryan’s newest release with Belting Bronco/Warner Records – a six song EP called Quiet, Heavy Dreams that dropped the day after Thanksgiving. While announcements regarding the release were kept fairly low-key, Quiet, Heavy Dreams continues to justify the meteoric rise of Bryan’s music career that began with DeAnn in 2019. The EP is a whittled-down format for Bryan – whose last two releases were 12 and 18 tracks, respectively – but this only heightens the impact of his raw-boned, emotive vocals and adroit songwriting.

Bryan worked with Eddie Spear (Brandi Carlile, Chris Stapleton) to produce Quiet, Heavy Dreams; as a result, this release adopts a more balanced sound while still maintaining the raw edge that made DeAnn and Elisabeth so striking. This fusion sparks an inherently interesting contrast, while Bryan’s singer-songwriter/Americana/folk style is still the ideal framework for highlighting his pure, undeniable talent as an artist. He has the ability to weave a story that cuts right to the core, and – whether they’re happy, sad, or ominous – it’s a sure bet that Bryan will deliver chill-inducing songs that linger long after the EP has finished.

Speaking about the EP and its title track, Bryan explained: “I have some out-there songs, story songs. They resonate with me personally but when I’m singing them and hearing them it feels like I’m dreaming. Imagining the things for myself, and how the people in those stor[ies] all tie together. They all have something to say and someone to say it to. I wanted to put all of these very imagery-driven songs together. The title track, ‘Quiet, Heavy Dreams’ is about a man (or woman’s) journey of trying to be or become who they truly want to be.”

The EP kicks off with “Letting You Down,” which plays into the sharp sense of self-awareness that has been a consistent thread running through Bryan’s songs.  This humble, unassuming current bleeds into the winding harmonica of “Traveling Man,” which paints a picture of deep-rooted wanderlust – the kind that gets down in your bones  that you just can’t shake  (“if I could find me a place to rest my mind/but momma always said you’ll get there in good time”).  This track, among others, also highlights the sing-shout background vocals that often give Bryan’s songs a collective, down-to-earth element, adding an extra layer of relatability.

Quiet, Heavy Dreams also finds Bryan diving in to a darker side of his songwriting with two tracks that are painted in sinister shades reminiscent of Chris Knight’s “Down the River”: “Birmingham” and standout track “Crooked Teeth.” Guitar adds murky, ominous undercurrents on the latter, while the stomping beat adds a sense of urgency as a revenge-driven lover realizes that “love is such a mighty drug/a mightier disease.”

By the end of the Quiet, Heavy Dreams, it’s clear that any praise for Bryan’s ability to turn a phrase is well-deserved; he was the sole songwriter for the whole EP. The six-song collection has enough variety to keep listeners engaged, while still pulling all the pieces together to make an intriguing, haunting,  and powerful project. Ultimately, Bryan’s command of a style that’s entirely his own bodes well for the Oklahoma native as he follows in the tradition of all the other legendary singer-songwriters that have risen out of that hallowed red Oklahoma dirt.