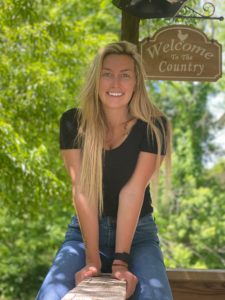 Carly Rogers has been kicking it in Nashville for a few years now, mixing it up, playing as many shows as she could and cutting her teeth writing songs and attending college. And when you spend your formative years in Nashville dealing with the drunkards and idiot men, you end up getting pretty tough skin and that thick outer layer is one of the things that Carly and her music are known for. Our first feature on Carly was back in 2018 (you can check it out HERE). It has been a great ride watching Carly’s writing and songs grow throughout the last two years.

Like everything, writing songs and finding your production crew and core co-writers is a journey and Carly has had success gaining some serious players in that field.

She has started working with talented Alejandro Medina of 3rd Lion Collective, who we have had on the podcast as well. Together we think that Carly and Jandro have found their best sound yet.

With layered vocals and some really rocking guitar and drums Carly’s newest single “Somewhere Else” really impresses. Carly penned the track with Dan Alley and Sam Banks and she had this to tell us about the track:

“‘Somewhere Else’ was inspired by an overheard conversation at the original Losers bar in Nashville. I was watching football on a Sunday by myself, enjoying some mozzarella sticks & a Miller Lite. Behind me, I heard a young drunk guy complain to his friends about how “someone somewhere else has her now, & it ain’t me.” Immediately I thought, “Now he’s just someone somewhere else.” I wrote down the idea in my phone thinking maybe one day I would write it. Over the next couple of months I had proposed the idea in a few different co-writing sessions. On December 10, 2019 I pitched it to Dan & Sam and they bit. The song wrote itself.”

So, give this one a listen and see if you agree with us that this one is Carly’s best yet! We can’t wait to see what the future holds for Carly as she navigates the wild world of being an independent artist.  If anyone can make it, it is a tough, hard working woman like Carly.