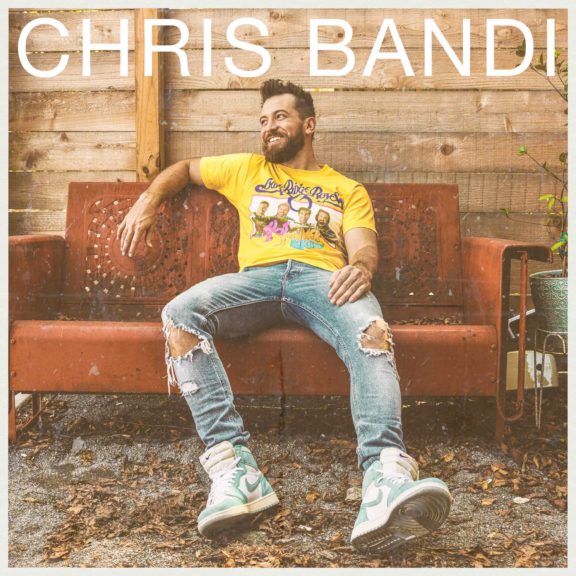 There’s something poetic about Chris Bandi’s debut EP being comprised of seven songs; it mirrors the seven years that he spent in Nashville building it. “We had a collection that we thought was such a great collection of songs. That narrowing it down got so so hard…So we thought seven was a great number to kind of introduce who I am and stay within the EP,” Bandi explains. When we talked to him last year, he told us about a tradition that his dad had when he was a kid where they would listen to a new album without skipping any songs. This album is well constructed and is an easy listen top to bottom. As Bandi describes it, “It’s almost to a tee, how we play our live show. We want some tempo, but then it’s kind of like a roller coaster. It ebbs and flows. Tempo, bring it down a little bit, mellow it out, give them another tempo, mellow it out. Tempo, tempo, mellow it out. So it was kind of, we kind of knew going in what the order was going to be.”

Bandi was a co-producer on this project along with Ash Bowers. Of that experience, he tells us “It was awesome to be able to get into the studio, and kind of bounce ideas off incredible studio musicians. It was awesome to be able to get in and put my stamp on the music because I hadn’t really ever done anything like that before. I kind of wear this hat that was so new to me, and being able to get in there and really dictating the way that I wanted the songs to sound and the way that I wanted to be portrayed was incredible. It was it was amazing.” He told us that it was an intentional and fan focused decision for this album to be comprised of all new music. “We had so many songs that that we wanted people to hear and they can already hear those ones on Spotify, Amazon, apple, anywhere. They’re listening to music. So we wanted to give them a fresh start and new music… I’m still going to be playing a lot of it at shows and stuff like that. But we did not want to put it on the EP we wanted it to be almost all new songs other than man enough now.”

The album opens with Dirt on Me, a particularly smart choice for an introductory track. Its overarching lyrical themes create intrigue for both the character in the song and, by proxy, the artist telling this story. Stylistically, this track has strong sections that tell a story that builds on itself the further the listener gets into it. With strong contrast in each section, it’s reminiscent of the style of country classics like George Strait’s Love Without End, Amen and Eric Church’s Sinners Like Me. Bandi tells us, “Some of the songs that that we got pitched to us were incredible songs. Hardy was a writer on one of them. Be able to go into the studio and the fact that they trusted me with their song—as a songwriter, the songs are your baby—and so the fact that they trusted me with their baby to go in and not ruin it is just a testament to them, that they believed in it and they believed in the project.”

Leave It To A Song plays with the idea of how music can take you back to a memory. It’s the type of song that reminds us what exactly we love about music. Bandi says “I tried to write a couple of songs that look back at life like that, but they did such a great job writing this that I knew it was better than any of the ones that I have tried to write about songs that I had to cut that one.” This includes one of the first songs that he wrote when he first moved to Nashville called Track 9 (which was recorded by Clark Manson) of which he says “I still love that song so much.” Even though Leave It To A Song doesn’t mention a specific song, Bandi tells us “You know what song” it’s about for you.

By Zach Kale and Chris Bandi

Would Have Loved Her was a late addition to the album, but as Bandi tells it, he had the concept for this song for a long time. “It’s a kind of autobiographical story. I wrote it about my grandpa, and he passed away a few months before I met my girlfriend and I had the idea I bet you would have loved her in my notes for such a long time and a couple people I brought it in to write. Nobody really fit on it and I brought it to Zach and Zach actually told me that his father passed away before he met his wife, and I said, I think I know what we’re writing today. So that one, just tugs at the heartstrings a little bit. I think that it is simple lyrically, but I feel like a lot of people can relate to that. And either have been through a situation like that, that they can, you know, pull back on. And then we wanted to use true life events. When we were we were telling that story. So the fact that people had liked it and every time we played it in live, it’s gone over really, really well.”

One of the especially captivating things about this song is how its stripped down production puts the focus on the lyrics. It highlights Bandi’s unique voice which has simultaneous characteristics of roughness and smoothness to it. He tells us that they had actually recorded the song with a full band as well as the piano vocal. “Barry Weiss runs my label and he is record royalty. He has worked with some of the biggest acts in the world and he was like I think we just go with the, the piano vocal. I think it brings out so much of that emotion and draws everybody into the lyrics so they can actually listen to it.”

The transition between Would Have Loved Her and Free especially shows the transitions between songs that Bandi had mentioned that he had in mind while building the album. After an emotionally heavy song, Free feels weightless and gives a well earned feeling of release. This recording captures the energy of his live show perfectly. “I love singing Free live that is one of my favorite songs to play live because they break it down a little bit of it and then we just jam out at the end. It has a little bit of R&B in there but it still has all of country roots. The songwriters Connie Harrington, Allison Veltz and Zach Kale did a phenomenal job with that song and, again, the fact that they let me go in and cut that is just incredible and still baffles me, because that is such a great song…Free has kind of those, those choir vibes so we said we just took you to church.”

For an album that is full of high points, it’s hard to identify any particular song as a favorite. However, They Make Whiskey truly stands out. This is a good song on a first listen that quickly becomes a great song when the listener notices some of the subtle heart breaking details in the lyrics. Bandi is particularly excited to get this song out and shares, “I’ve been playing Whiskey for a long time. And that’s one of the ones that people come up to us after shows and they’re like where can we download that where can we hear that after tonight? So I’m so excited to be able to get that out to everybody…it’s been a crowd favorite. So to be able to have that out is gonna be so cool.” While Man Enough Now is the cornerstone of this EP, this was one of the earlier songs that was considered to be included. “I wrote Whiskey and What If We Don’t in the same period of time right after I signed my record deal and I knew that I was writing songs that were going to be on my album” he says.

If you’ve seen Bandi live in the past, What If We Don’t will be a familiar track. However, the recording has a slightly different rhythm than what you’d be used to. He tells us the story behind the difference between the live version and the recording, “I probably sing everything different almost every single night…So we got the demo back, worked it all up and I started we started playing it at shows. It turns out I was singing it wrong at shows the whole time from the demo. My manager is one of my best friends in the world. He was like ‘You’re singing it differently when we went into cut it then you were on the demo when you wrote it.’ He’s like ‘Yeah, listen to how you sing it.’ I’m like, ‘Oh, I’ve been seeing it wrong live this entire time.’” You’ll have to catch him on the road to see how he plays it going forward, but both versions are fun and bursting with the energy that Bandi has made a hallmark of his performances.

If you are familiar with Chris Bandi’s music, this is probably the song that you already recognize. He purposefully chose to close with this familiar tune with the intention to “get people to listen to the whole album.” It is a perfect note to finish on as it tells the story of self growth and reflects on how he’s gotten to the point that he has. We covered this song in depth a few months back, but since then it has become Bandi’s first single to radio. We’re already playing it on Sunday nights on Raised Rowdy Radio, but we highly recommend that you request this song on your own local stations.

Bandi also shared with us some of his experience of sharing music during a quarantine, “We think of new creative ways to get this music heard. So we’ve been doing a lot of cool video stuff like I did some backyard bonfire, acoustic videos and stuff like that. So we’re just trying trying to keep the momentum moving forward throughout all this, but I’m hoping and praying that we get to get back out on the road very, very soon.” He shared one of these videos with Raised Rowdy exclusively where he covers the song Teenage Dirtbag. He told us about the process he uses to choose what songs he covers in both his live shows and his Facebook and Instagram live streams, “It’s just what I’m feeling. That’s what it is. That was a huge song. I loved that song as a kid wanted to kind of throw it back a little bit, but with the videos and stuff like that, if I get a song stuck in my head and I’m asked to go find my guitar and learn how to play it and sing it, put it out on Instagram or stuff like that. I wanted to do something that was a little bit different that showed a little bit about who I was the music that I love.”