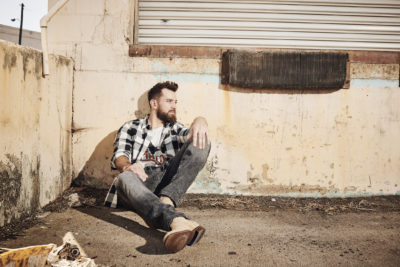 Chris Bandi grew up listening to just about everything. His mom used to play 90’s country like George Strait, Garth Brooks, Travis Tritt and Alan Jackson in the car and if his dad was driving him to school that day, it was rock music and 90’s pop. Like a lot of people his age, he went through a punk-pop phase in the early 2000’s which led him to bands like Fall Out Boy, Blink 182 and Story of the Year and he says we can’t forget to mention Nelly. As a fellow St. Louis native, his music was a right of passage for Bandi. It was in St. Louis where Bandi played with his first band, a rock group that he joined because the guitarist’s uncle was a coworker of his mom’s and she volunteered him to sing. Around this time he started falling back in love with country music. “In high school I went back to listening to country music because it wasn’t the country music my mom was into. Keith Urban, Kenny Chesney and Brad Paisley and I was like, this is country music. This is cool.” His love for the genre only grew from there. He went to college in Mississippi where he saw Eric Church and Luke Bryan play in their early days. “The first time they came through, there were maybe 250 people, the second time maybe 500 and then the next time it was sold out so it was awesome to kind of see them grow as artists and performers and to see how they are and how well they have done has been awesome.” As it turns out though, it wasn’t so much the type of music that he was listening to that had the biggest influence on him, it was the way that he was listening to it.

“I used to go to a place right by my house called CD Warehouse that used to sell new and used CDs and every Saturday my dad would take me and I could get one new and one used CD but the rule was from top to bottom without skipping any songs.” This tradition has stuck with Bandi and molded how he looks at music to this day. He’s passionate about listening to songs the way they were intended to be listened to, cover to cover. “One of my favorite albums of all time is Some Mad Hope by Matt Nathanson, who is a singer/songwriter. That was one of the reasons that I first picked up an acoustic guitar and I learned every single song. When I listen to that CD, its just like I picked up right where I left off with it. It’s amazing. Any good album will take you back to a time where you first heard it and you first fell in love with it.” A few others that make the cut for Bandi are How to Save a Life by the Fray and John Mayer’s Continuum which he describes as “probably the greatest album of our generation”.

The way he sees it, the shift to a single based market sacrifices some of the greatest stories. As he’s seen success with his first single, “Man Enough Now”, the beauty of an album format is still on the forefront of his mind. One of the most important questions he asked himself when crafting his first EP was how the songs on it would compliment each other. “We tried to take “Man Enough Now” as a baseline because that was who I am and what I want to be and what I want to say as an artist…Subject-wise they’re all difference but you can listen top to bottom and know who I am listening to it”. He’s taken his time on this one and every song is a deliberate choice. “I’ve written maybe 75% of the songs and then we have some other songwriters on the other few. I cannot wait to get it out there and finally have something that I can give people at shows that they can stream online. It’s been a long time since I’ve been telling people we were going to have an EP out and now we finally have concrete proof that it’s coming out” He compares crafting the perfect album to creating the perfect mixtape. He laughs and asks “Are people going to know what a mixtape is now?”.

The backbone of his EP, Man Enough Now, is also his first single to country radio. This song was originally released in 2016 in an effort to have somewhere to direct the people who had seen him play live so that they wouldn’t forget about him. The first day it was available, it was streamed 5000 times. Bandi found himself asking “5000, Is that good? Should we get more? I don’t know.” But by the end of the week, that number was 25,000 and he knew he had something special (it now has over 60 million). Since then, Bandi says “a lot of people come up and say how much the song means to them and how it’s helped them through a breakup or realized before it’s too late. We’ve played it at weddings now which is crazy to me.” His motivations are simple, Chris Bandi wants to create the type of music for his fans that he is passionate about himself. “All I want to do is write songs that are true to who I am and true to the way I grew up and the way I live now and I don’t necessarily want to fit my music inside a box. I kind of want to leave it up to putting out the best song I can that are true to myself and let Apple Music decide what genre that lives in. Sure I’m country through and through and that’s what I love writing and love playing but the box can get overwhelming and frustrating…What I try to focus on most when I’m writing songs is making sure the lyrics are great and they’re the best part of the song.”