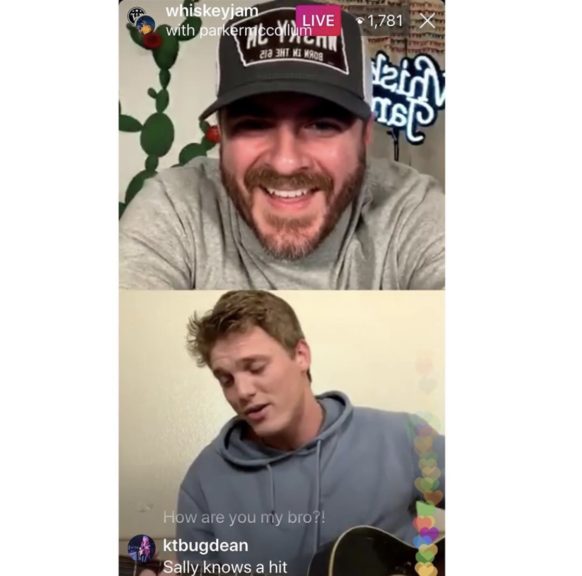 6 of Our Favorite Livestreams During Quarantine

We’re bored. These six livestream concerts are keeping us sane. Tell us some of your favorites in the comment section below!

Monday nights in Nashville would not be complete without Whiskey Jam. Ward and the crew just celebrated their 9th anniversary back in January if it weren’t for this coronavirus, they’d still be going strong at Winners in Midtown. To combat this absence from the bar, Ward has hosted guests like Brad Paisley, Parker McCollum, Lainey Wilson, Riley Green and Ashland Craft on Whiskey Jam’s Instagram Live. One of the cool things they’ve also done is created some amazing merch that pertains to this crazy time. Check them out every Monday @WhiskeyJam starting at 9pm CST!

Like Whiskey Jam, another staple in Nashville during the middle of the week is Revival at Tin Roof. As a new Nashvillian, I have only attended once (I’m ashamed) but the one time I did attend, it was magical. They too are sticking to their weekly shows via Instagram every Tuesday. Guests like Lainey Wilson, Jobe Fortner, Rob Snyder and Vinnie Paolizzi have hopped on and have entertained us, all while we sit on our couches at home. Follow them on Instagram @Revival615 to be blown away by the pure talent that bring on every week.

He’s arguably the biggest star in country music at this very moment. With this stardom comes lots of fans. Like all of us, these fans are sitting at home bored out of their minds. To keep them sane and give them something to look forward to, Luke has played various new songs during his livestream videos on Instagram, YouTube and Facebook.  Check out one of our favorites below: 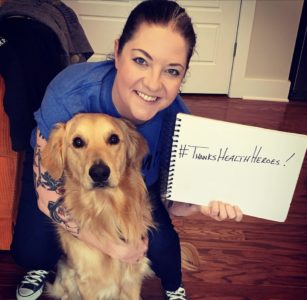 It’s hard to put into words how fanatical we are about Ashley McBryde. Not only is she one of country music’s biggest badasses, but she also puts out some of the most genuine music one will ever hear. Her new album Never Will is a prime example of this. She has been showcasing some of these new tunes all while helping out others. On April 10th, McBryde went live with Jack Daniel’s to help raise money for musicians who are out of work during this COVID-19 pandemic. She has also been playing for children. On an Instagram post from April 9th, she told the kids to “grab some animal crackers and a capri sun and get ready.” It’s official, Ashley McBryde is for the kids(At least on a one time basis). Follow her @AshleyMcBryde on Instagram to stay informed on any new livestreams that may be happening. 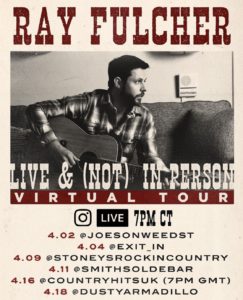 While most of the world is shut down due to this pandemic, Ray Fulcher has still found a way to tour. So far, he’s made a six-venue run, making (virtual) stops at Joes on Weed St., Exit-In in Nashville, Las Vegas’s Stoney’s Rockin’ Country, Smith’s Olde Bar in Atlanta, United Kingdom’s first national country radio and Ohio’s Dusty Armadillo. Without venues and supporters like the folks who run these hangouts, the music we cherish could not be possible. During these livestream performances through the venue’s Instagram accounts, fans are able to hear music from Fulcher and donate money to the employees of that particular venue. Follow @RayFulchermusic on Instagram to find out ways to support these venues we all wish we could be at right now.

This list wouldn’t be complete without a shameless self-plug at the bottom. Not only have we hosted some of our favorite artists like Sam Grow, Adam Sanders and Kolby Cooper on our Faqcebook Live takeovers, but we’ve also had some of our writers like Sara Custance, Trey Bonner and myself on to ramble on Instagram. If you’re reading this story, you likely already follow us on Instagram (or Facebook), but if you don’t, give us a follow @RaisedRowdy to see who we’re going live with next.