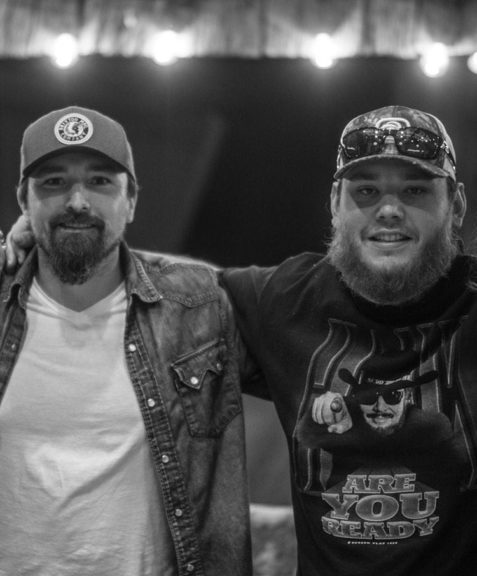 There are many different things that can take a song from being good to great. Luke Combs has a history of having songs that are relatable, catchy, authentic and well, pretty darn great.  To get these songs just right, Luke enlisted a whole host of amazing songwriters who he is lucky enough to call friends.

Here is the first of four installments where we tell you about five of those folks who Luke keeps in his writing circle and helped make this album.

Josh Phillips is a Big Machine Label Group artist who has been friends with Luke since before they moved to Nashville.  They co-wrote an early fan favorite of Luke’s “Can I Get An Outlaw” as well as played a lot of Carolina shows in the same circle.  Josh also has cuts with Brantley Gilbert and of course “Angels Workin’ Overtime” off the album we are talking about today.

Josh has two EPs released and available for streaming; Lee County that was released in 2017 while he was on tour with Luke and his 2019 self titled project that Josh co-wrote with a lot of other names you see as writers on What You See Is What You Get (Erik Dylan, Randy Montana, Jonathan Singleton). You can catch Josh out on the road when he isn’t in the writing room, the woods or spending time with his family.  Check out our podcast episode with Josh as well as our features on him HERE

Erik Dylan is one of our favorite songwriters in Nashville.  His distinct style of lyrical wordplay can be heard across a large scope of the country genre. From Texas based acts such as Josh Abbott Band and Eli Young Band to Grammy Nominated Americana artist Brent Cobb, all the way to helping pen multiple Riley Green songs. He also as you might have guessed at this point co-wrote tracks on Luke’s album.  (Dear Today and Blue Collar Boys). On top of that, Luke even lent his vocals to a song Erik cut on his album titled “Baseball On The Moon”. So yeah, Erik is one of our favorites. You can see our previous coverage of him HERE and hear Erik’s own work, as well as his work as a member of the Rock band, Black Mountain Whiskey Rebellion wherever you stream your music.

Erik is a gem in the Nashville music landscape – a talented manager, producer, writer and artist. Truly a renaissance man in the country music world.  He was raised in a “Map Dot Town” called Muscotah in Kansas (66058).  We hear that around there you wear your last name like a tattoo on your arm. Erik surely wears his heart on his sleeve and it’s easy to hear that when listening to songs he helped write.

Barry Dean has been writing hit songs in Nashville since before many Nashville artists were out of high school. He’s one of those guys that has been known to turn out some of the best songs and is a welcome addition to any writers room (or round for that matter) due to just being a really great person who happens to write hit songs.  You can check out some of that list of songs HERE. Barry helped co-pen the title track from the new album, “What You See Is What You Get” with Luke and Jonathan Singleton

Rob Synder might just be our favorite thing to come out of Philadelphia, Pennsylvania since the cheese steak.  Rob is know by his friends as Big Rob, not just for his 6 foot 6 stature, but for his personality and smile that can fill any room.  Friend and ambassador to many folks in Music City and in life, Snyder co-wrote “She’s Got the Best Of Me” with Combs and Channing Wilson that ended up getting released (after originally being a hit on the Highway XM) on the This One’s For You Too. The song spent four weeks at No. 1 on Billboard’s Country Airplay chart in 2018 and has always been one of Luke’s fan favorites. On this album Rob co-wrote “Dear Today” with Luke and Erik Dylan.  We have a feeling this track could be a future single and is one of those songs that just hits you right in the chest each time you listen to it.

Rob runs one of the Premier writers rounds in Nashville every Tuesday at the Tin Roof on Demonbreun called Revival. Those that have been there know it is the place to be for real, heartfelt, emotion evoking songs.

Rob has been working on more songs that we hope he releases soon as well as getting cuts with some other artists around town.  Keep up with Rob on Instagram and take a listen to his ode to the Super Bowl winning Philadelphia Eagles HERE

Drew Parker is one of our favorite up and coming artists in Country music.  His sound is super traditional but he mixes in some modern lyrics with those traditional ones to make his own brand of Country music. We have tried to have Drew on the podcast a few times now, but it keeps alluding us (we will fix that one day). Drew co-wrote “Lonely One” with Luke and Erin Ashley on Luke’s first album and is back on the new record with two tracks.  The first which Luke cut with Brooks and Dunn “1, 2 Many” was co written by Luke, Drew, Tyler King and Dan Isbell. Then “Nothing Like You” that Luke, Drew and Rob Williford wrote is another tear-jerking love song.

Drew just dropped two new songs that were talked about HERE, with more to follow in the form of an EP coming in 2020.

Well folks that is the first 5. Give these folks some love and and follow their projects. These are the folks that help write all these songs that we all love so much and help make Luke Comb’s new album what it is – a masterpiece.  Next time around will be five more incredibly talented writers and artists in their own right, so make sure to stick around our page and get ready to see that one.