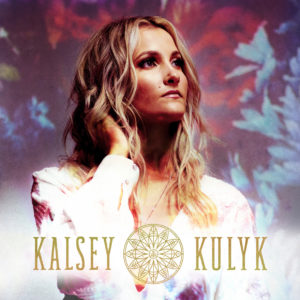 Often in music and in life the loudest voice in the room gets the most attention.  Sometimes that type of attention is justifiable based on the merit of what is being spoken, but sometimes a voice that is quiet and vulnerable can be even more powerful in terms of how it speaks to you. Words, specifically music can be meaningful in many ways, but the songs and voices that stand the test of time often are not the biggest and not the loudest.  Often they are the most insightful, the most emotion evoking.   That type of sound and delivery is what makes Kalsey’s self titled EP so important.  These songs draw you towards them in a way that not many songwriters and performers can. It really is special. This music is country to it’s core.

Kalsey has a fantastic story about how she got here (catch up on that HERE), but for this piece we are going to focus on this album and how it came to be.

For Kalsey, this project has been a long time in the making.  She moved to Nashville with intentions to put her nose to the grindstone and while you never know what to expect while on the journey, the end result is undoubtedly Kalsey.  She tells us about the road towards these songs. “This album has taken many years, tears and been a ton of hard work. I am so proud and grateful to say we are finally here. I believe that timing is everything, and this album is being released at exactly the right time. I couldn’t have done it without the support of my family, friends and team. I’ve been writing for this release for the last two-and-a-half years, really crafting what I wanted to say to my audience and how I wanted to say it. I got into the room with some incredible song writers that helped me say exactly what I wanted to. It’s been an incredible and humbling experience. I hope everyone enjoys it as much or even more so than I do.”

The songs individually speak for themselves, but together they form pretty powerful story-line.  Kalsey weaved the tracks together as a testament to the inner working of the human condition.  Love and what comes from it, deep thought, playing off your feelings as something that you can joke about and draw humor from, pain through different lenses.  The hard, hard road of figuring out who you are by figuring out who you aren’t. These types of songs are the ones that tug on your heart the deepest and the kind that seem to stand the test of time.  Tracks that songwriters of yesteryear would be proud of.

As Dierks Bentley has famously said “Country music has always been the best shrink that 15 bucks can buy”. Kalsey’s self titled project has that type of emotional insight and power that people often cling to to get through life’s hardest moments.  Give it a spin. REALLY take a listen.  This is what country music is meant to be.  Open hearts on display, powerful lyrics, creative delivery, this project has it all.

Those loud voices, the ones that are often heralded with the loudest of horns and praise should take a listen to some more music like Kalsey’s. This music and her lyrics are special. If you don’t give this project your attention you will be missing out. This is some of our favorite music of the year.