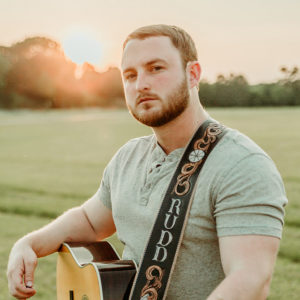 If you’ve listened to any of his songs or read our feature on his last single, you already know that Blane Rudd can perfectly translate the essence of small-town life into a song. His self-titled EP, produced by Josh Bright, is no exception to this standard, featuring songs that each capture a different element of that kind of living.

Lyrics like “Monday smells like Copenhagen and truck stop diesel” put you right in the scene in “Red, White, Blue Collar Town,” penned by Rudd, Erik Dylan, and Dave Turnbull. The uptempo pace and vivid imagery in this ode to the simple life of corner bars, cold beer, and hometown pride make this track one that might actually wear out your repeat button.

If you’ve spent any time at all in a small town, you know that nighttime backroad drives are one of the best things to do when there’s nothing to do. Driven by Grady Saxman’s drums and the guitars of Justin Ostrander and Tim Galloway, “Tell Me Twice” highlights the thrill of getting a little lost with your girl or guy in the shotgun seat. “Her Way is the Highway” presents the opposite side of that scenario, as Rudd’s powerful vocals address the heartbreak that comes with wanting someone that can’t or won’t stay in a “slow-down, two-light town.”

Rudd’s excitement about these three tracks is contagious: “First off, I’m so pumped about the songs on this EP. This project started out as cutting 3 or 4 songs and releasing them over a year period, but when I heard these after they were finished I just had to let them go.”

The release also marks a significant change for Rudd. “It’s the first time I’ve been able to give my people a project with options. It’s always just been, throw out a single and hope it resonates. I got to write this stuff with some of the best in the business and I think it’s opened up a whole new set of doors for my sound. I hope everyone enjoys it as much as I do.”

With three incredibly solid tracks, it’s almost impossible to pick a favorite. This EP is one that you don’t want to miss. So crank it up, roll your windows down, and let Blane Rudd take you on a trip through small-town America.