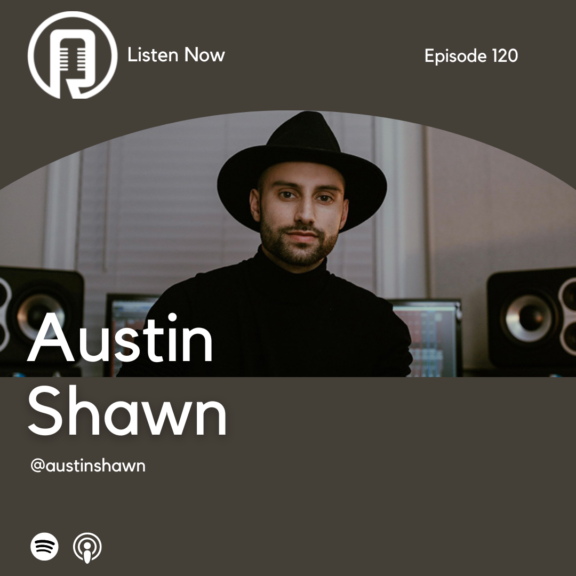 If you don’t know the name Austin Shawn you should. He is currently the #1 country music producer on the Billboard charts and we have him on this week’s podcast with Kurt and Nicky T. He talks his process, how he got involved in production and songwriting and honestly has some amazing advice for aspiring producers and music enthusiasts. Listen and get inspired just like we were after this conversation.

Hear part of the conversation here:

Austin Shawn:    00:07:25    And I kind of think about those things, you know, like zoom out and look at a macro perspective. So I was like, Man, Bailey’s like this, this kid that, you know, like he’s from, from South Illinois, you know what I mean? He, he worked the pipeline for the union. Mm-hmm. <affirmative>. And then Gavin Lucas are one of our great writing buddies, You know, same thing. You know, they, and they love like this Americana folk style of writing, um, you know, mixed with a little bit of modernized country and stuff. So that’s kind of like, I take all that in consideration. I’m like, Okay, this is like, this is like what? This is the agreed upon filter, you know? Mm-hmm. <affirmative> that we wanna like, that we want to go the direction, And this is with every artist, you know, that I take on. It’s like, here’s our, here’s our, our square, you know, our picture frame, you know, And these are like the boundaries that we’re setting.

Austin Shawn:    00:08:08    This is the goal, you know, this is what we’re aiming for. So let’s, let’s shoot through that filter all the time. Let’s always be asking ourselves, Hey man, is this song shooting through that filter? Is it shooting in that picture frame? You know, we have these boxes. And it’s not like it’s putting yourself in a box. It’s more like putting yourself in your own box. Yeah. You build a box, right? And then you paint within those lines. And if it’s going outside, you say, Hey, man, I think this is, while this could technically work, you know, it’s not really like that filter that we’re shooting through. You know what I mean? Let’s go back into this and let’s stay within those bumper lanes of our sound, you know, and let’s build upon that and let’s keep, like, let’s build a mansion within this square footage.

Austin Shawn:    00:08:46    You know what I mean? Just all the way up to the sky. And so that’s the, that’s the, the main integral like goal, you know, for, for me as a, a producer in my job, I feel like, is to, is to create that, you know, that identity for an artist, that sonic identity. Yeah. You know, cuz you hear like a record. Like even, I mean, even like Luke, you know, you hear a Luke record, you’re like, Hey man, that sounds like, that sounds like a Luke Combs record. You know? Or you could hear another song and say like, That sounds like this or that sounds like that. A lot of people say like, Man, that’s like Fleetwood Mac sounding. Or like, old school man, it sounds like they hear a disco beat and they’re like, Man, that’s Michael Jackson sounding. Or, or whatever it is. That’s my goal is to create an artist like that to where everybody like, hears their voice, hears their sound, and say, Man, that’s a Bandman record. Yeah. You’re like, Man, that’s his record. Or That sounds like that. And so it’s like, um, it’s that, that, um, uh, how do you say, like, I wanna create timeless songs, basically. Yeah. And so to do that is to, to find your filter, find your lane, find those bowling, those what I said, like those bowling lanes, you know, and then let’s, let’s build a fucking mansion. Yeah. Hell

Austin Shawn:    00:10:05    Yeah. Single body to, to that person. Exactly. You know, to that person based off of like, you know, who they are. You know, because you can really can’t fake anything. Right. I think you, you maybe can for a little bit, but you really can’t fake anything, honestly. Yeah. So, so why not just, you know, do what you do and, and make it, um, make it badass. Make it like the, the greatest thing. The greatest version of yourself. Yeah. You know what I mean?

Austin Shawn:    00:10:41    <laugh>. Yeah. I’m actually, I’ve actually started up, uh, lessons with Kurt next week. Nice. <laugh> <laugh>. Uh, no. Um, yeah, I, I, I was, I really was. Which is, um, it’s funny, My family really wasn’t, you know, super musically inclined. My grand my granddad, you know, he sung gospel music. My mom was in choir growing up a little bit. My dad did, did karaoke on the weekends a little. But I mean, no one was really like doing what I did. Like I was, I was kind of the outlier a little bit in my family, but loved music, man. I heard Keith Urban, uh, Golden Road. First record I ever heard that one in, um, um, the, what else? Uh, Shania record. Um, and, uh, those are the first two records that I ever listened to. And I, I would go lose my mind dude. I would listen, I would first things I ever did from six years old, was just like, go crazy over music.

Kurt:    00:11:38    That’s awesome. Yeah. I feel like I was definitely a little bit of a later bloomer as far as like getting into music. And I started playing guitar when I was 10, but it wasn’t until like I started playing with friends that I like really fell in love with it in that way. Yeah. Um, cause I started taking guitar lessons and it was kind of like, you know, basic chords and it wasn’t like super exciting, but when I started learning Iana songs and my friends were playing it with me and was like, This is fucking awesome. Then I got hooked. Yeah.

Austin Shawn:    00:12:03    I’ve been hooked. And it was interesting, you know, I grew up in the, in I wanna say like a little bit of the, the early onset of the internet age too. Mm-hmm. <affirmative>. So like, I took guitar lessons too, you know, when I first, um, started, my mom put me in ’em, but it was just super boring, you know? And I just never, it was kinda like a waste of money a little bit because I just never like, wanted to practice the songs and everything. But when I started looking up YouTube videos and I started like, looking up tabs, you know, and like, doing all that stuff that inspired me, you know, cuz I could hear like, you know, I could hear Aray song on, on mtv, you know, and then I could go to my computer in that evening and I could look up the taps, you know, or look up a tutorial on how to play it.

With a feverous work ethic and a great ear, Austin has found a lot of success.  If you want something you have to work for it and do your best to grow every day.  Luck isn’t really luck, it’s putting yourself in the right place at the right time. I hope you enjoy this podcast as much as we enjoyed recording it.