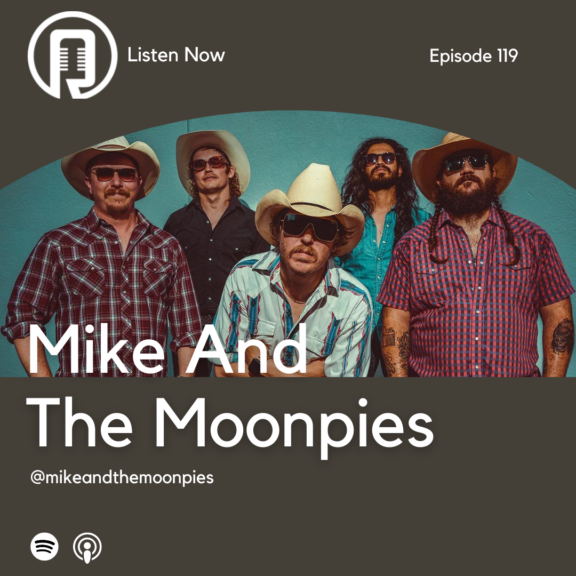 Mike and the Moonpies on the Raised Rowdy Podcast

Hear some tales from the front row with Kurt Ozan and Nicky T wherever you stream your podcasts.

Kurt and Nicky T were on site with Mike and the Moonpies at the Countrypolitan to talk about their musical world including the Opry, pop up shows and how they got to their sound. Give this one a listen and gaze off into the sound they create that you are sure to love.

Here is some of the conversation:

Mike Harmeier: When we started it, I was like, okay, I wanna play every dance hall in Texas, or I wanted to do all of these big rooms, like I wanted to play Billy Bobs or I wanted to play Greene Hall, I want to headline Greene Hall or whatever. And you know, those came fairly quick and cuz we were doing that, we were doing the Texas dance hall circuit. So that was a big one to knock off. And now, you know, now we’ve headlined all those spots in there. So now it’s, when you start touring, as a younger band, you do this little circle and then you expand your spiral out and out, out and out. And, now we’ve done the biggest stage in Nashville basically. I mean. So then what’s after that? You know I’ve never played Red Rocks. I wanna do Red Rocks.

Nick: Yeah. I’ve seen Kurt play Red Rocks actually. So he can tell you a little bit about it.

Kurt: Yeah. Man, Red Rocks is fun. It’s, when I was growing up my goal with my music was I want to pay my bills and I don’t want to have a job

Kurt: And so thankfully I’ve been able to do that and then I’ve never kind of reset my goals. But hearing you guys talk about, we had the London Symphony play on our record at Abbey Road, that’s not even something that would ever cross my mind as possible ever in a million years. It’s literally,

Moonpies: I never thought that either. It’s literally unbelievable. It’s like you tell somebody these stories like, Oh, what do you do for a living, well I’m a touring musician, What have you done? You say these things, It sounds unbelievable.

Check out the podcast to hear the full story and get to know Mike and the band even better!