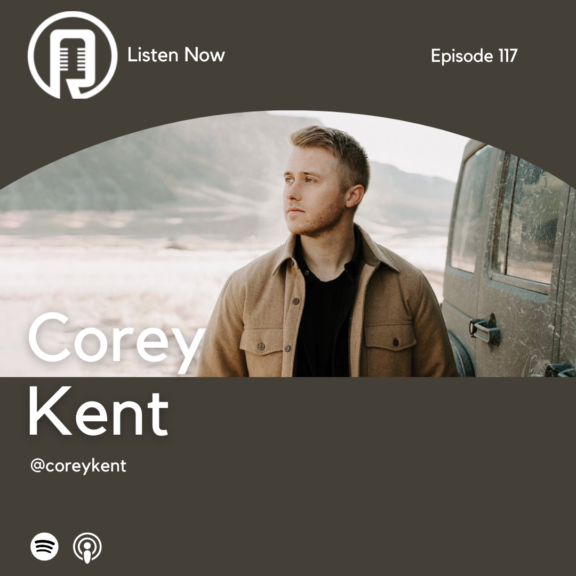 Kurt Ozan and Nicky T get to sit down with Corey Kent for the first time since his world got turned upside down by a little song called “Wild As Her”. They talk about the struggle to keep the wheels turning during some time off, what makes success special and what we can expect next from Corey and his camp. Give this one a listen and don’t forget we told ya Corey was a star in the making since 2019.

Here is a little bit of the podcast and some links below to listen!

Corey Kent:    00:24:46    You have a career as an artist or a career as a songwriter, and the best songwriters in the world wrote songs and the best artists in the world sang the songs. And, and I loved that thought of like, man, there are, I’m still learning to be hopefully one of the greatest songwriters in the world mm-hmm. <affirmative>, but there are current great songwriters, like some of the greatest of all time that have hundreds and hundreds of songs that haven’t been cut yet. And who am I to try to sit here and, you know, write in the same song that’s already been written, but theirs are just better and it doesn’t get the time of day. So I just wanted to be open minded in my career when I got the shot to just got the best song that I heard, whether I wrote it or not.

Corey Kent:    00:25:29    And so that was kind of how this happened and how it unfolded. Um, Brett Tyler is at Combustion. Which is where I write now and Yep,,I heard through my publishers and they were like, Hey, I think this could be a fit for you. And it’s been a cool journey, figure out the difference between a hit and a hit for you. Those two things are very different and I feel like it really over the last couple years have dialed in and been able to say like, I can tell that that’s a hit and somebody’s gonna make a lot of money off of that, but that’s not for me and my fan base. Yep. This one just rang the bell. Everybody around me, my whole team, in fact, more so even than I, like at one point everybody was like, You gotta cut this song.

Corey Kent:    00:26:14    And I was like, Oh, really? Like I don’t, I don’t know. Okay, yeah. Here, like, here’s what I would do with it, but are we sure? And then everybody was like, Yeah. And so that was one of the first times in my career where I really trusted my team Yeah. Was like, I assembled these people for a reason because I respect them and I think that they’re great at what they do. And if I’m the only guy in the room that has any hesitation, maybe I’m just the guy in the room that’s wrong. And so they, you know, put it on my radar again. I went, went and cut it. And then I got super pumped when we got the cutback and was like, this was the greatest thing that we’ve ever recorded. Yeah. And Oh yeah. Yeah. And it, and it was just like affirmation that the right team was around. .

Corey Kent:    00:26:56    The right songs were being presented and, and uh, you know, and, and it fit perfectly with the other stuff that we were cutting. And so it was just a very natural thing. And I will say we didn’t have any idea that it would do what it’s done. Right. I mean, I’d be lying if I told you that we were like, Yeah, this will go viral and be one of the top 50 country songs of the year or whatever it is. I don’t know. Yeah. But had no idea. In fact, we had like a bunch of songs that we felt like we’re a-list songs that are, we hadn’t grown our fan base big enough to release those songs yet. Yeah. So we were like, okay, let’s, let’s put out some, some songs that, uh, that will help us grow so that we can put out the stuff that’s a little heavier and, and weightier. And we put this song on an explore and we were like, Oh my gosh. Like this is, we found our, it really helped us identify our thing. Yeah. Because up until that point, like we know what music we love, yeah. And we’re putting that out, but there’s also like a special lane of like what you love that overlaps with what your fans were wanting from you mm-hmm. <affirmative> and it kind of helped us pinpoint exactly like this kind of rock and roll country thing, which is awesome. Yeah. Like, I’m so happy that it’s a Rocks Roll Live has had that, you know what I mean? That’s had that forever.

Corey Kent:    00:28:13    And you know, I think that might have been some of the magic of that song is I think it helped us for the first time really. Um, well that and like Ain’t My Day is kind of in this thing too, but I think it helped us start to translate what we were doing live and connect it to the music that we were putting out. Yeah. And it, it is hard to, it was hard to do for, for a little bit to try to figure out how to marry those two things and make sure that when you go see the show and then you go listen to the record, those two things are super cohesive. Yeah. And it was a journey to find the balance there and, and I think the song really helped us with that.

Nick Tressler:    00:28:45    So how did it first start popping on online? Like what, what process did that look like? Like was it like some people started picking up and doing videos with it mm-hmm.

Corey Kent:    00:28:55    <affirmative>. Yeah. I mean we had like, you know, a small team at the time of me and pretty much my manager doing all of the social stuff mm-hmm. <affirmative> and uh, and that’s still pretty much how it, how it rolls. Like between he and I, we do everything. Um, but he had tried a couple things with a few different releases and we were really consistent with how many songs we were releasing and the, the distance between the songs. And, you know, from the time that we did that first podcast, like every six to eight weeks, a new song came out over the course of the year. And, um, so we were just trying everything and when something would work, we would take note and when something didn’t work, we would never do that again and tweak it a little bit and move on. And then eventually we had had like 10 or 12 things that we were like, this worked, this worked, this worked this work, so now let’s just turn up the intensity on all the things that we know work.

Corey Kent:    00:29:50    Mm-hmm. <affirmative>. And so that’s kind of how the initial groundswell happened. It was like these guerrilla warfare marketing efforts. Um, in large part, due to my manager Chris Fox, he, he did a great job of identifying what worked and being able to look at, you know, the response whenever we put a song out. And so basically put the song out, ramped up the intensity and started to see some real movement. We were like, Oh man, might be honest something here. It wasn’t the fastest release that we had ever had mm-hmm. <affirmative>, but it was like, Oh, this is doing well. And just got a phone call from him one day going, Hey, congrats, you’re having a moment right now. Like, what does that mean? He’s like, Well, we were at like 50 videos yesterday and now we’re at like 10,000 videos… hear more on the podcast

Thank you to Corey for being on the podcast and thank you for listening.  Please rate and subscribe to the podcast to help us grow!