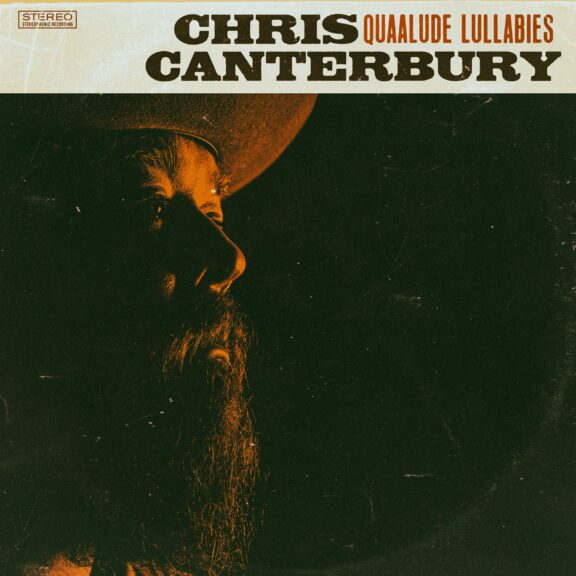 Chris Canterbury Leans Into the Darkness for ‘Quaalude Lullabies’

It’s been said that there’s a fine line between freedom and loneliness – if you can even separate the two. The promise of a life untethered calls to some, while others, like the narrator in the opening track of Chris Canterbury’s new album Quaalude Lullabies, believe that “a memory is worthless if you make it alone.”  From the arrangements to the lyrics, Canterbury’s newest project lives and breathes within this divergence, turning that fine line into bleeding ink over the course of nine tracks.

Kicking off with “The Devil, The Dealer, & Me,” the first verse of the album establishes an immediate baseline for the caliber of songwriting present throughout:

To see the dark in the back of my eyes

There’s an army inside my head

And a monster under my bed

Numb my mind so I don’t have to lose it

A heart only breaks when you use it

Of all the things I don’t wanna see

The devil, the dealer, and the dark side of me”

Later on, “The Devil, The Dealer, & Me” poses a question that seems to animate much of the rest of Quaalude Lullabies: “Am I running free or running scared?” While Canterbury gives listeners a look at rock bottom through a variety of different lenses, the album’s sense of motion comes to the forefront in tracks like “Fall Apart” and “Felt The Same.” Both tracks chronicle the heartbreak and broken dreams that often accompany life on the road, pairing these themes perfectly with stark acoustic picking in “Fall Apart” and the swirling lament of the instrumentation in “Felt The Same.” In the part-prayer, part-confessional “Back On the Pills,” self-awareness and acceptance find the narrator admitting that “I was born a coward/I was born to run” as he wakes up to a motel sunrise. As far as album closers go, this one has a particularly powerful and haunting final impact.

Throughout the album, Canterbury’s expansive vocals strike the same kind of smooth and smoky balance you’ll find in the symbiotic relationship between good whiskey and good cigars. For most of Quaalude Lullabies’ tracks, his singular voice becomes their most prominent feature. This makes for a conversational record of seemingly limitless depth, pulling the listener in to each vignette through both its tone and the flashbulb-like detail present in the lyrics.

Though Canterbury’s songwriting proves to be an exception here, in most cases, larger-than-life characters like the star of “Kitchen Table Poet” can’t be explained; they just have to be experienced. “I met a man in Waverly, Alabama once that said he’d never left the county. He also said he made the best apple brandy in the state. I remember everything about that day”, says Canterbury. “His Winston Lights, the grit under his nails, and his bottomless bag of one-liners – but I can’t remember his name. That’s where this song was born.” “Over The Line” (penned by Canterbury, Ben Chapman, and Harper O’Neill) is another standout track, taking listeners along for a long-haul trucker’s final ride (“topping off at a Flying J/I know every speed trap from Atlanta to LA”).

The album’s lone light note comes in the form of “Sweet Maria,” which Canterbury took to Instagram to explain. “With an album like Quaalude Lullabies, I felt like it needed a little break from the rain…I wrote this with [Vinnie Paolizzi] in an 8×12 office at RCA Studios in Nashville, TN about a week before civilization came to a halt. He tricked me into writing a love song. I kept trying to talk him into killing off someone in the 3rd verse. I’m kinda glad he stood his ground. My trivial resentment would later lead to writing ‘The Devil, The Dealer, & Me.’” That said, Canterbury did still work a death into Quaalude Lullabies.  You can’t help but appreciate the wry and/or ironic sense of humor that has to have led to the most upbeat-sounding song on the album, Will Kimbrough’s “Yellow Mama,” being one about an inmate’s road to the electric chair.

While following up an album like 2017’s Refinery Town is no easy task, Quaalude Lullabies has set a new bar. As he was also responsible for things on the production end of this project, Canterbury constructed the album with Springsteen’s Nebraska in mind. “I wanted to woodshop a record together that felt like Nebraska…I wanted it to be loose like a box of bedroom demo tapes, but cohesive enough to stand on its own.”  The album was recorded at Farmland Studios and came together with the help of Ben Chapman, Gabe Lee, and Jonny and Scotty Murray, among others.

Overall, Quaalude Lullabies maintains an uninhibited flow from one track to the next, keeping the focus on the stories present in each of its songs. It strikes a nice balance between sparse instrumentation and a full band, varying the sound accordingly to meet the needs of each story as well. It’s everything and more that we love in an album here at Raised Rowdy. Long story short, go listen to it. It’s a striking and powerful collection of songs that is bound to be one of our top albums this year.

If you want to hear more about Quaalude Lullabies from Canterbury himself, you can check out the recent podcast episode he did with Kurt and Nicky T too (Apple/Spotify).