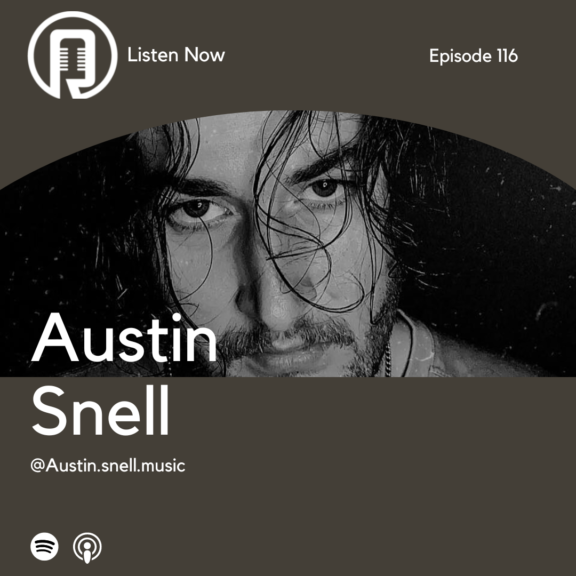 Austin Snell on Tales from the Front Row: The Raised Rowdy Podcast

Excuse the Mess – this is our first blog post about our Country music podcast and this one has a little bit of rock in it too.

Austin Snell is a name to know in the country world. After picking up guitar while in the Air Force, Austin has made very good use of his time in Nashville (just moved to town in May). He has a classic, drawl-filled Georgia voice but his sound is undeniably rock influenced. Hear Kurt and Nicky T chat with him and hear his whole story. See our article about Austin HERE.

Kurt: And what made you pick up a guitar?

Austin: It is crazy that this is the reason why, but so we would have one roommate. This is in tech school. So we were in training still. You had one roommate, you’re sharing a room with somebody and I I’ve always stayed up really late. I’ve been a night owl. Same. Um, I was up one night watching ed. She videos of all people. He’s great. He’s so, and I was, I don’t know if you guys have seen him do like the loop pedal thing.

Kurt: Oh yeah. On a live stage. He does all on his own.

Austin: I dunno if he still does or not, but he used to do all of his live concerts, just him and a loop pedal. Yep. And I remember staying, I was up at like 2:00 AM one night watching these videos of this dude, just playing whole live shows with just a loop pedal and guitar. And I was like, dude, I’m buying a guitar, man. I spent my last $400 the next day on a Martin that I had my bank account.

Kurt: We played in London and ed came out and did a song with us or with Luke, I guess I was playing with Luke or whatever. And afterwards we were talking about the show and how it went and how much fun we had.

And Luke’s like, yeah, man, because Ed’s usually just a guitar and the Looper. And we’re like, Hey man, don’t get any ideas, please. Like how much money he could save by without playing without a band.

Kurt: friends make fun of you for buying a guitars?

Austin: Well, yeah, at that point it was nothing more than I just wanted to learn to play guitar  and then I’ve always kind of loved music growing up and kind of worked my way to learning covers and then kind of got bored with that a little bit. So I was like, you know, I’m gonna try to write a song and it’s kind of just progressed since then.

Kurt: give us your artist style speech that you probably have said a bunch of times.

Austin: well, this is my first podcast.

Austin: So I tell people just in general conversation that, um, growing up back when CDs were a thing, um, my dad had four CDs and he had a Nickelback CD. He had creed. He had Three Doors Down and then Alan Jackson. So I tell people I’m like kind of rock with a little bit of country in there.

Nicky T: Your Dad would love hanging out with us, well me at least me.

Austin:  Nickelback just put out a banger that we listened to on the ride here. San Quentin..

Hear more of Austin’s story, influences and how the song came to be… and Kurt & Nicky T be old and talk more about Butt Rock on the podcast: