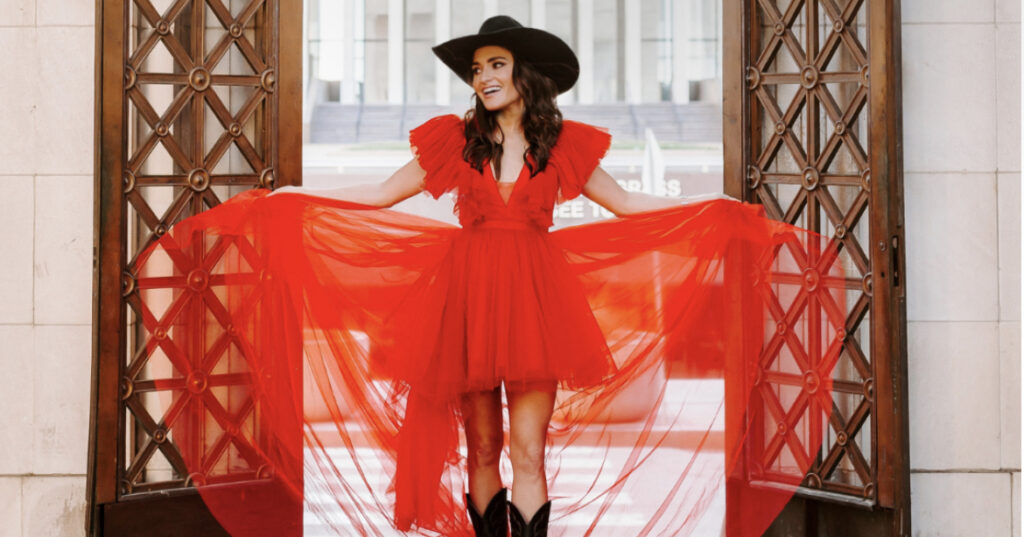 Bri Bagwell, who is the Texas Female Country Artist of The Year and has had 8 number one singles on Texas radio, released her newest record, Corazón y Cabeza, on August 26th. Her previous album, In My Defense, spawned 4 of the previously mentioned hits including “As Soon As You,” which was featured on CMT Music.

She first got her start at a very young age.

“I’ve been singing in a band since I was 14 years old and in college I started playing little gigs here and there,” Bagwell remembers. “I graduated from The University of Texas in Austin in 2009 and started a day job in marketing almost immediately after while still playing gigs. I realized quickly that I couldn’t do both after a few late nights collided with early morning meetings! So much yawning.”

She goes on to say, “I had a booking agent already who was willing to take a chance on me, so I dove head first in to music and quit my day job. I was only 22 years old and I thought there was no better time to jump in! I already had an income, no matter how meager, solely from playing music. I was full of optimism and energy; it was the best decision I’ve ever made.”

Like many people from Texas, Bagwell fully acknowledges the talent that comes out of that area. She, however, started playing somewhere else.

”I fell in love with the Red Dirt music scene, the songs, the cult-like following, the dedicated radio stations, etc. However, I actually started playing in a band with my two brothers in southern New Mexico. We played dusty honky tonks, fundraisers and weddings. I got the music style education pretty early,” she recalls.

Bagwell has had many songwriters inspire her work, which includes everyone from Willie Nelson and Robert Earl Keen to Miranda Lambert, Maren Morris, and Kacey Musgraves.

”I got got meet both Willie and Miranda and they were both incredibly nice,” she says, “two world famous musicians, both kind and humble. That sticks with you.”

When it comes to Corazón y Cabeza, there is definitely a certain feeling she is trying to get across with it.

”This is a songwriter album and it is 100% who I am as a writer and a singer. It is meant to showcase the range of songs I’ve been writing throughout COVID with true discipline to write whether I was inspired or not, hence both my heart and head being highly involved,” Bagwell explains. “There are really vulnerable truths, dramatized made-up stories, country and rock songs, Spanish lyrics and so much more. It’s an outpouring.”

”There is a lot more Spanish influence in this record,” she says when stating the difference between this album and her last. “I wanted to stay true to my New Mexican roots and highlight that part of my life. I grew up loving Selena and speaking a little bit of Spanish. There’s more storytelling on this record for sure. Also, I’m in a very happy and healthy relationship and have been for a while, so there’s actually some love songs on here. Surprise!”

When it comes to her songwriting on this record, she didn’t mess around.

”I write religiously every two weeks. It’s my homework that I give to myself and it’s the best thing I’ve ever done in my career. My producer, Rachel Loy, started me on this process and I just never quit,” Bagwell says.

She surrounds herself with other songwriters that also follow the same method as her. They give each other words or phrases to challenge each other in their work.

”In Trenches, I had to use the word ‘Hemingway’ in a song. I can’t imagine not having that tune on the album and it was born entirely from the author’s name,” she states.

Rachel Loy produced and played bass on Corazón y Cabeza and handpicked the other players on the record because of her Nashville connections. Bagwell’s boyfriend, Paul Eason, also plays acoustic guitar and appears on some tracks singing harmonies.

When it comes to the future, she isn’t quite sure what’s to come.

”I definitely need to make another music video or two for the songs that are released. I’d also like to make acoustic versions of the songs on this record. I’ve written a children’s book and I’m also starting a podcast! It’s safe to say I’m always up to something but I’m not sure exactly what comes next.” She admits, “I should take a breather after this record, but knowing me, I’ll get right to work on the next one.”

Make sure to check out Corazón y Cabeza and catch Bri Bagwell on tour, including on the Texas Country Music Cruise in October, at Steamboat Music Fest in Colorado in January, and then to Key West Mile 0 Fest in Florida right after that!