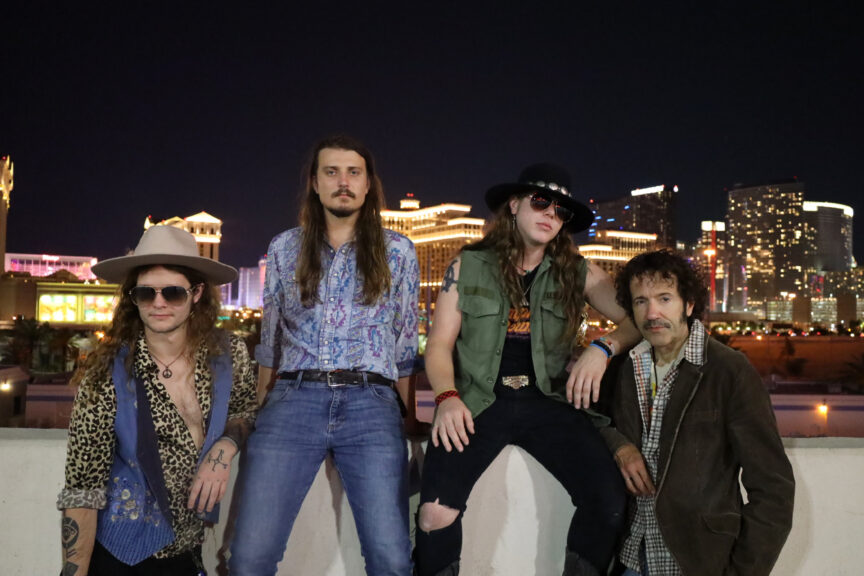 Outlaw country meets scrappy rock ‘n roll in Hippies & Cowboys’ “20 To Life” music video. The tongue-in-cheek video covers the explosive end of a relationship and the revenge the man takes on his ex-lover. In a fog of summer heat, the band laments on the woman that left him lonely and resolves himself to kill her for her betrayal. The chorus is the narrator’s admission that while he “might be looking at twenty to life” for killing her, he won’t regret it. Aaron Sparling (lead singer & guitarist) says, “I guess you could call it a murder ballad. It’s just a good old rock n blues song about a girl that breaks a man’s heart while living in Toledo and leaves him, and heads on back to Reno. So it’s a story about the man heading out to Reno to find the girl and kill her. Haha, touchy subject maybe, but it’s bold, and I think we like to do things that are a little on edge.”

Donning a comically large gun and driving down desolate to Reno to search for this woman, the leading man discovers her and her new lover in a motel room. After committing the deed, alongside the song’s upbeat, rockabilly melody, the killer’s getaway is foiled and he is arrested. Despite his annoyance at the development, “20 To Life” is a fulfilling story of love, heartbreak, and criminal deeds for mortal crimes.

You can get an exclusive first look of Hippies and Cowboys new music video “20 To Life” here at Raised Rowdy:

Biography: A brand new band of outlaws in Nashville, Tennessee, Hippies & Cowboys is bringing a taste of southern rock n’ soul to the heart of music city. The band members consist of Aaron Sparling (Lead Vocal & Guitar),  Andrew Lambie (Lead Guitar), Scott Metko ( Drums), Kevin Corbo (Bass), and Nolan Brown (Piano & Guitar). Drummer Scott Metko tours with David Ball. He is also an on-screen drummer for Patsy Cline and ABC’s ‘Nashville’ Rayna Jaymes. The high-energy band has traveled throughout the country, playing shows from Florida to Detroit to everywhere in between; You can find Hippies & Cowboys regularly playing on Broadway in Nashville, TN at Kid Rocks, Johnny Cash’s, and Tin Roof. Their musical influences and taste vary from member to member, but the one thing they all have in common is their love for soul music, such as Sam and Dave, The Blues Brothers, Booker T, The MGs, Otis Redding, and much more. They also all have a strong bond over classic rock, such as Aerosmith, Zeppelin, The Doors, CCR, Tom Petty, Lynyrd Skynyrd, The Beatles, and so many more. Their debut single “20 To Life” releases on February 11th, 2022. They recorded “20 To Life” at East Avalon Records in Muscle Shoals, Alabama.