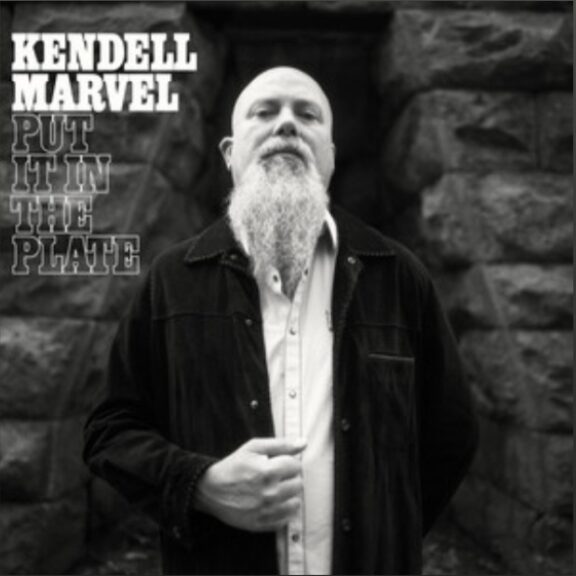 Picture this: it’s 2 a.m. and you’re in your hotel room, scrolling through the channels to try and find some background noise to fall asleep. Usually you’d hope for a sitcom – some re-run you’ve seen a thousand times that can recycle a laugh track to soporific effect – but because you paid approximately $40 for this hotel room (gotta conserve the funds for those bar tabs), your channel flipping only reveals one thing: the dreaded toupee-wearing TV televangelist. After being told you’re going to hell one too many times by that farcical Southern accent (booze and fornication are sins, after all), the donation hotline at the bottom of the screen seems to take over the room with its unnervingly bright glow, and you begin to wonder – what the hell are they doing with that money, anyway?

And thus, the scene is set for “Put It In The Plate,” the lead single off Kendell Marvel’s upcoming album Come On Sunshine (September 23). Written by Marvel and Dee White, and produced by Marvel and Beau Bedford, the track is sonically lowdown and mean in a way that only Kendell Marvel can achieve. It ignites with brawling, anthemic southern-rock sound from the very first note.

In the first few lines, “Put It In The Plate” also plants listeners squarely in an audience: “preacher man workin’ on the day of rest/everybody sweatin’ through their Sunday best.” As it picks up with searing guitar licks and thunderous drums, the single rolls out as Marvel’s own brand of fire and brimstone. His vocals cut through the fray with an ominous rumble to call it like he sees it, holding a mirror up to hypocrisy (“money is the root of all evil they say/you wanna get to heaven, gotta put it in the plate”).

The pointed criticism raised throughout “Put It In The Plate” (“don’t come ‘round here, raisin’ no fuss/everybody welcome if you’re just like us”) seems to come, at least in part, from the same well of inspiration from which Marvel drew to create Come On Sunshine. He explained, “I like to work with people who are different than me. Working with Beau Bedford in Dallas meant that I was playing with guys I’d never met before. Guys who had different ideas, different tones, and different ways of playing than my friends back home. We recorded the album live, finishing the whole thing in four days. That’s how you capture magic. The same thing can be said for the people I write with. I prefer left-field people—people who come from different backgrounds and different genres. Devon Gilfillian comes from the R&B world; he hears different melodies than I do. Waylon is a gay man, so he has some experiences that are different than mine. I love to surround myself with people like that, and sit in the writing room with someone who isn’t just like me. Because that’s how you capture magic, too.”

You can pre-order the new album here, check out his website, or catch Marvel out on the road at the following shows:

*with The Wild Feathers