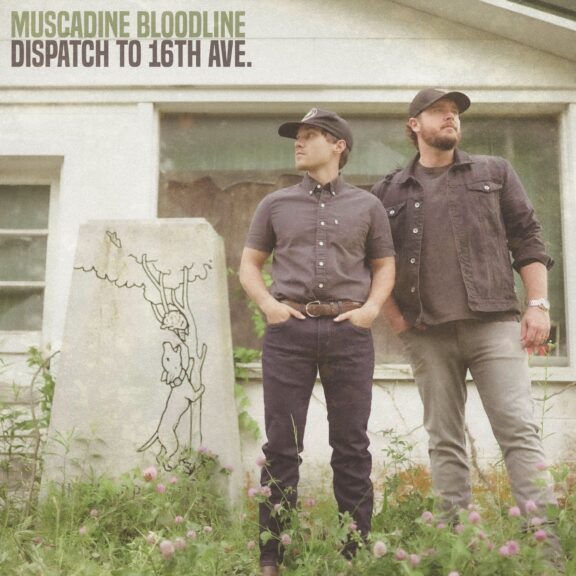 With a legion of fans and “timeless” [Lyric Magazine] music, Muscadine Bloodline continues to prove that paving their own path is the road to success. With last week’s release of the highly anticipated album, Dispatch to 16th Ave., the country duo ultimately finds their authentic sound in an infectious dose of contemporary meets vintage. The nine-song album was produced to be listened to from top to bottom by bandmates Gary Stanton, Charlie Muncaster along with longtime collaborator Ryan Youmans. It includes a who’s who of traditionalist songwriters including Brent Cobb, Adam Hood, Casey Beathard, Tyler Halverson, Jordan Fletcher and Tyler Chambers.

“One of 2022’s most highly anticipated releases.” – Today’s Country Magazine

Muscadine Bloodline dropped three songs to fans prior to the album including, “Dyin’ for a Livin,’” “Dispatch to 16th Ave.,” and “No, Pedal Steel” yielding over four million streams. “Dyin’ for a Livin’” was launched at radio by SiriusXM Outlaw Country and is currently No. 33 on the Billboard Country Indicator chart after only 16 weeks. The trio of songs adds to their over 300 million career streams across platforms and 30 million video views. You might notice some ROWDY folks featured in the “Dyin For a Livin'” music video released back in September. Without a doubt, it’s our personal favorite.

“[‘Dyin’ for a Livin’ is] a raucous blast of punk honky-tonk that conveys the thrill of being onstage as well as the toll of too many sleepless nights.” – Rolling Stone

“With Dispatch to 16th Ave. the duo have proved that there is something deeper, more authentic and inherently timeless about their sound and style…” – Lyric Magazine

“No, Pedal Steel” really hits home with the chorus.

No, pedal steel I don’t wanna feel as lonely as I do now ‘Cause I’d lose my mind in 3 quarter time high on that lonesome sound Now that she’s gone, I’ve lived ‘em all, I’ll burn that old jukebox down ‘Cause your melody makes her memory so real No, pedal steel,

Everyone knows that feeling of songs that remind you of that person you are trying to forget – and this one about sums up all those feelings.

If you have that person in your life that walked their way in and absolutely flipped everything around in all the right ways – you’re going to want to listen to “Toll”.

“Dead on Arrival” talks about that misfortunate turn of events when a man touches another man’s wife – and well… the chorus says enough about this one.

“My Side of Town” is that love that didn’t turn out as planned, and she found someone else that treated her better but you’re sick of seeing her on the same side of the fence and just wish she would stay the hell away from your side of town.

I’d be lying if I said I didn’t wanna ever see you anymore You took the county line, took my piece of mind, hell you even took my dog So quit your breaking down what I’m building up, time to fortify the wall

“Hung Up on You”, you know the one where you should’ve treated her better but you didn’t so she moved on and you’re still not over her no matter how hard you try and how bad your friends want you to move on…

All my friends keep telling me that there’s more fish in that blue sea But I’m still caught up tangled tight in taking you for granted, blew my chance to make it right When I hung up on you, bet I’ve called you back a billion times since then But I still can’t get through, kinda sounds like no forgiveness on your end Filled my phone with names and numbers that I can’t talk myself into since I hung up on you

“Down in Alabama” – gives you that insight on exactly where Muscadine Bloodline got their roots from and where they wanna be.

“Southern” talks about exactly what it’s like to be raised in the south and how it’s a way of life not just a place.

“After searching for a long time, we finally feel like we have found what we want to say and what we want to sound like. The record is loosely arranged in the concept of honoring the artists who came before us. They recorded with limited instruments and didn’t use modern sounds or bells and whistles. Charlie played all of the acoustic guitar parts, Gary did the same with the electric and we used our touring band to create the most raw and real sound we could bring – with no edits. As we see ourselves evolving into better artists and performers, it feels like we found a perfect place to park the ship. Better get comfortable because this album is what we believe to be the best Muscadine Bloodline,” says Muncaster and Stanton.

The boys killed it with releasing an entire album of “Visualizer” videos that go along with each song and give you more of an insight to their creative minds on their Youtube page.

About Muscadine Bloodline
Charlie Muncaster and Gary Stanton grew up in Mobile, Alabama, but didn’t cross paths until they each started to pursue their musical dreams. In 2012, they forged a friendship when Stanton opened a show for Muncaster’s band at Soul Kitchen in Mobile. Charlie’s contemporary vocals complimented by Gary’s harmonies and masterful guitar licks showcase a powerfully refreshing mix of talent, passion and unfiltered authenticity. Since naming themselves Muscadine Bloodline in 2015, they’ve had two Billboard-charting critically-acclaimed EP’s, have sold out shows across the country, opened concerts for hundreds of artists and earned a standing ovation at their Grand Ole Opry debut in 2018. The guys’ Southern roots carry over to their band name as well: Muscadine grapes grow in the South while Bloodline represents their heritage.

Raised Rowdy had the pleasure of hosting MB’s Album release at Live Oak bar in Nashville, TN this past Sunday night. Take a look at our instagram for more pictures and features of our insane night celebrating this kick ass new album.