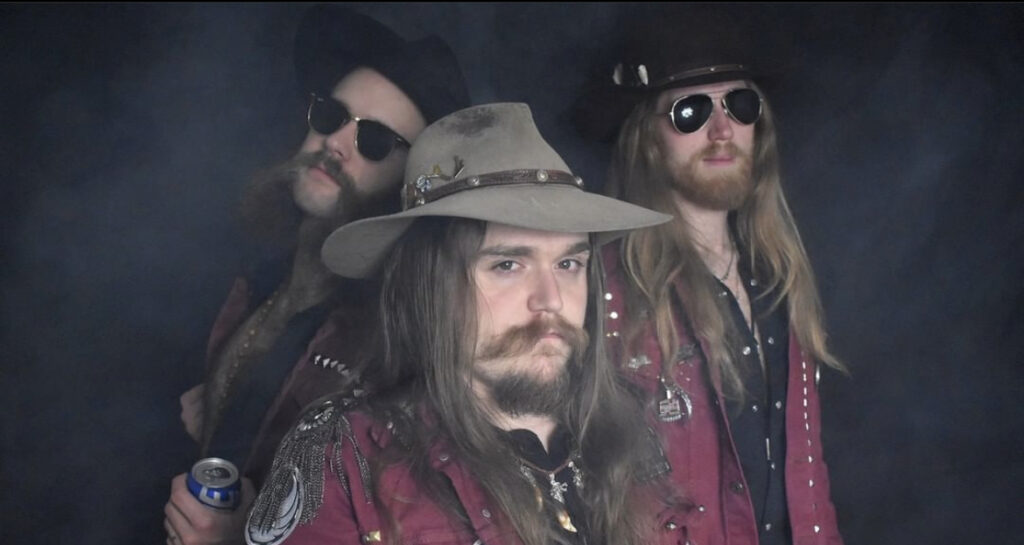 A Talk with Missouri Southern Rock Band The Comancheros

When staking out new music to listen to, a lot of people immediately think Nashville, the mountains of Kentucky, Oklahoma’s Red Dirt scene, and of course the talent-rich state of Texas. The Comancheros, a country/Southern rock outfit with a dash of grit, come from none other than the great state of Missouri. Vocalist and guitarist Tanner Jones and drummer R. Michael Cook started teaching lessons at the same music store and quickly began writing music together. Bassist and vocalist Jon Green, who grew up with Cook, moved to Missouri once The Comancheros was officially put together.

The style of The Comancheros is unique. The Southern rock frame mixed with an Outlaw country attitude is brought together with a heavy edge, demonstrated by the riffing and melodies that make up their tunes.

”We all grew up listening to country, but always played in classic rock and death metal bands. Country is what we want to do, but we just tend to play everything hard and fast. That’s why we started Heavy & Western Clothing. We thought it defined how we approach music,” recalls the band, also commenting on their own clothing brand that they started to promote their unique way of showcasing their art.

The Comancheros have quite the web of influences that molded them into what they are today.

”AC/DC rules, Thin Lizzy is the greatest and Red Headed Stranger is probably the single most perfect album to ever be recorded. Also, Jon knows about everything there is to know about Lynyrd Skynyrd,” Cook explains. “He can tell you what year a photo is by the kind of amp they are using.”

All three of the guys in the group generally contribute to the songwriting. Cook writes a lot of the lyrics while Jones and Green work out the melodies. However, their newest single, “Old Mexico,” was 100% Jones.

“He recently spent some quality drinking time south of the border. Not all of his clothes made it back stateside,” Cook jokes.

Playing everywhere from Texas to Georgia, The Comancheros have made their rounds. In a few weeks they’ll even be making their way across the pond with Sons of Liberty to play some shows in England.

“Kansas City is kind of our hometown , even though it’s two hours away. The scene and folks there are super supportive. If there are two shows on the same night, everybody just hits both!”

Their 2020 album, Too Old to Die Young Now, was produced by Richard Young from The Kentucky Headhunters. Physical copies are only available (for now) at shows and Merch Mountain, but you can stream the single, “Old Mexico,” on Spotify and YouTube.

“It was an incredible experience to hang out in Kentucky for that week and just soak in the history and knowledge. The feedback has been great, but it’s always tough getting the word out with no record label,” the group states. “We rely 100% on word of mouth, police reports, and people like you!”

More music is on the way from The Comancheros, so keep a look out. In the meantime, check their show schedule and catch them at a venue near you!

“We will be in Nashville coming up soon. We’ll party with ya’ll!”

If you’re in Nashville, see The Comancheros on February 12th at the Live Oak with Holden James, ROWDY and Revelry.