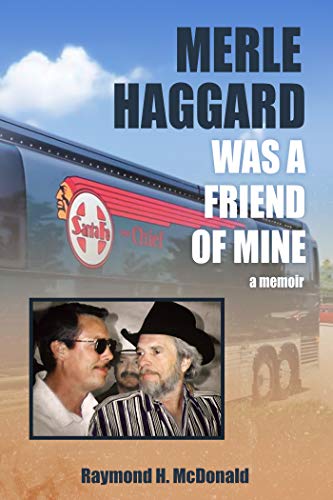 There’s an undeniable link between music and memory. Certain songs can become portals, bringing freeze-frame moments from our past back to life with cinematic clarity at the sound of just a few notes. For Raymond McDonald – a California transplant, enrolled member of the Prairie Band Potawatomi Nation of Mayetta, Kansas, and author of Merle Haggard Was A Friend Of Mine – this tie is a little stronger than most.

From teenage California summer days spent (quite literally) chasing down the Rolling Stones in a seafoam green ’65 Chevy Super Sport, to several stints as a radio DJ (“Ray-Baby from K-Baby spins three at a time!”), and his own work as a singer and songwriter (Haggard cut three of his songs), McDonald’s life has always had a soundtrack. In writing his memoir, though, McDonald chose to shine a spotlight on the chapters of his life that formed a juncture with the life of the country music legend.

While McDonald saw the same star power that the rest of the world did when looking at Merle Haggard, he also had the privilege of seeing the country music legend in a different light. From the time he befriended Merle’s stepsons, Mike and Buddy Owens, and subsequently lived under their roof as a teenager, McDonald was a part of Haggard’s inner sanctum.

McDonald watched as Haggard chose to hang the plaque for his first number one song in the hallway of their Oildale, CA home, as Haggard learned to use an iPhone, and as he became giddy at Frank Sinatra’s invitation for him to perform at the Reagan White House.  This perspective is one of the true highlights of McDonald’s storytelling in that he reconciles these small, very human moments with Haggard’s larger-than-life talent and other events in his life that were history in the making: Haggard’s attendance at the Kennedy Center Honors, and his friendships with Johnny Cash, George Jones, and Willie Nelson, to name a few.

That being said, if you’re looking for a tell-all exposé – look elsewhere. McDonald’s book resonates with respect, affection, and pride as he shares personal anecdotes and small snippets of Haggard’s life that might otherwise be lost to time. While people may let Haggard’s status as a former San Quentin inmate or the story he tells in “Mama Tried” color their understanding of who he was as a person, Merle Haggard Was A Friend Of Mine paints a portrait of a multifaceted man.

Readers meet a generous and kind Haggard who shed tears when he heard a song that touched him; who covered a Johnny Cash song with Third Eye Blind as a tribute to his friend (their version of Cry, Cry, Cry is on YouTube); and who hated lying above all else. This particular tenet was handed down to Haggard by his father, and Haggard, in turn, held McDonald to the same standard. “He said ‘Don’t ever lie to me. Always tell the truth whether I like it or not.’ That got me in hot water a couple of times!” McDonald laughed in a phone interview.  Haggard also loved animals and kept a menagerie that included dogs on his tour bus and a wolf, deer, cats, and turkeys at his ranch. He even befriended a mule (Shadow) that lived on a neighboring ranch.

McDonald was influenced to give these kinds of insights in the book, in part, by one of Haggard’s own heroes, Jimmie Rodgers. During a 1995 visit to the Jimmie Rodgers Museum that now stands in Rodgers’ hometown of Meridian, Mississippi, McDonald was struck by the everyday items he saw there. “He was one of Merle’s all-time heroes –  the father of country music – so I went to his hometown and they had a museum. I saw his Martin guitar that was in a vault with bulletproof glass. Inside in the cases were Jimmie Rodgers’ personal items: his canteen, plates made of metal, his utensils, shaving brush, things like that. I thought that was really, really cool.”

As such, McDonald wrote his memoir not just to tell his own story, but as a tribute to his hero and father figure. Speaking of the influence Haggard had on him personally, McDonald explained: “He was a kindred spirit. He was religious but not feverishly. We had the Bible open a lot – didn’t go to church – but we believed and we prayed. He knew that. I prayed with him at the table and he knew I meant it. He was a gentleman – he listened, he spoke properly, and when he got mad he’d let you know it. He was private in a lot of ways. I catch myself doing some of those things to this day. He was like a second dad and definitely influenced me and the way I try to be.”

For fans of Haggard and country music history in general, Merle Haggard Was A Friend Of Mine is a valuable addition to his legacy. Simply put, McDonald’s memoir provides something that formal biographies don’t. His unique insight and warm sense of humor shine through from the very beginning, extending an invitation for readers to walk alongside Haggard like he did.

The book is available in physical form and as an eBook from the publisher here, and from retailers such as Amazon and Barnes & Noble.