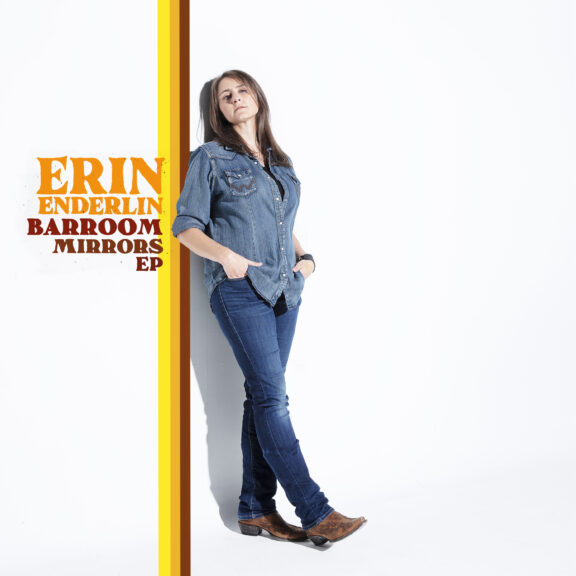 In her previous releases, Erin Enderlin has developed a signature sound that carries the torch lit by her traditional country forbearers. Following a natural progression, her newest EP Barroom Mirrors is a solid addition the catalog the Arkansas native has built so far. Over the course of six songs, Enderlin tackles dive-bar heartache in a way only she can – by nestling nuanced, cinematic storytelling between copious layers of fiddle, steel, and sorrow.

Kicking off the EP is “Somebody’s Shot of Whiskey”, written by Enderlin and Ben Chapman. The track meets listeners during “a blue ribbon morning after a black label night” and lays out the whiskey-soaked milieu that binds all the EP’s moving pieces together.  With a two-finger pour of something strong, “If I’m Not In Hell” finds a despondent protagonist in the midst of her own personal hell:

And burns with regret

No it’s cold and empty

As your side of the bed.”

Enderlin also enlisted the help of some familiar names for some of Barroom Mirrors’ tracks. Terri Clark joins Enderlin for a more lighthearted spin on moving on in “If There Weren’t So Many Damn Songs”, while Roseanne Cash lends harmony to “Cut Through Me”, one of the project’s standouts. With laser-sharp imagery and Enderlin’s soaring vocals, the track reflects on that one person that has the ability to leave you powerless:

Baby, you cut through me.”

Silvery and smooth, Enderlin’s voice adds a sheen of elegance to songs that live in the unpolished world of smoky neon, dark-spotted mirrors, and rough-hewn wood floors. “When I’m Drinking Whiskey” intertwines melancholy fiddle with drinking away a memory, while the EP’s title track faces uncomfortable reality with delicate, sweeping instrumentation:

Even if you don’t want them to

You can look away

But you can’t look through

All the things you can’t undo

Barroom Mirrors, as whole project, is more focused on self-reflection than many of Enderlin’s past releases, which often featured character-based vignettes. Although it addresses heartbreak across the board, the EP’s arrangements help create a subtly different emotion for each of its six songs. Enderlin produced it herself with the help of Engineer Justin Courtelyou, Assistant Engineer Kyle Blunt, mixing by Justin Courtleyou, and mastering by Amy Brown. Enderlin also played acoustic guitar on the project and was joined by an all-star cast of musicians that included Jenee Fleenor (fiddle), Megan Jane (drums), Rachel Loy (bass), Justin Schipper (steel guitar), and Melonie Cannon (harmony vocals).