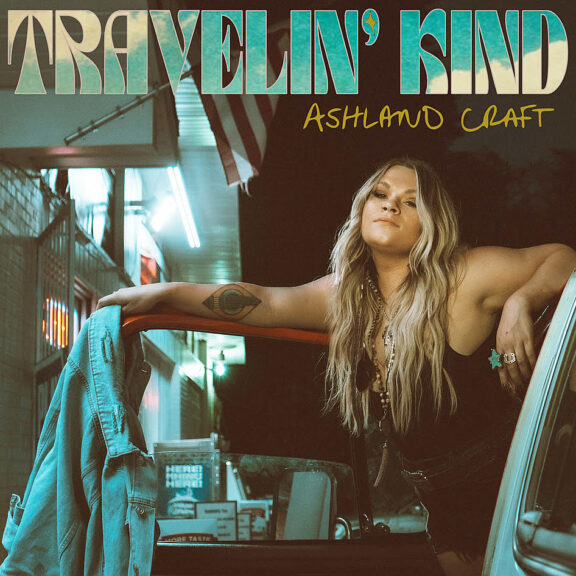 The title of an album typically sets the overall tone for the project, but few do so as succinctly as Ashland Craft with her debut record Travelin’ Kind.  With a heavy rock influence and the blues in her voice, the Piedmont, South Carolina native captures the essence of chasing down a musician’s dream – in this case, the pinnacles and the pitfalls of freedom’s double-edged sword. The eleven tracks range from the fiddle-laden and bittersweet “Letcha Fly” to the feisty dive bar romp of “Last 20 Dollars,” but across the board, it’s undeniable that Craft has star power in spades. We had her on our podcast back in February 2020, and if you don’t know her now, you will soon.

The album kicks off with the title track, penned by Craft and Erik Dylan. In between unbridled guitar licks and driving percussion, Craft’s voice has room to roam: “I wasn’t made for the settlin’ down/in a white picket fence water tank town/I got a soul like a black crow flyin’/I guess I’ve always been the travelin’ kind.” While wanderlust is a major element of Travelin’ Kind, Craft still takes time on the project to appreciate her roots. “That’s The Kinda Place” is an ode to a different kind of freedom – running wild within the teenage confines of a make-your-own-fun small town – that becomes even more appealing once “you get a few miles between a grown-up you and how it used to be.”

Travelin’ Kind is also a window through which listeners can see the more vulnerable facets of interstate living – one of which is moving on. It’s an inevitable part of travel, even though sometimes you have no choice but to leave a part of yourself behind as well. In “Make It Past Georgia,” Craft recollects past flings, including one who still has a piece of her heart even after she broke his. “Highway Like Me” pairs the rising country star with Southern rock/blues phenom Marcus King for a look at what it’s like to love a wandering soul, while “Day By Day” is a heartfelt trek through the aftermath of being on the “left” end of leaving.

The sultry, raw power in her honey-and-smoke vocals gives Craft access to an incredible range of emotions with her voice alone. From the murky, faded intro of “Come Down” to tempering anger with soulfulness in “Your Momma Still Does,” Craft imbues each track with a distinct mood that makes the project as a whole occupy its own unique space in today’s country music landscape. With healthy doses of fiddle and steel, Travelin’ Kind remains undeniably country while incorporating rock elements and catchy melodies that make it appealing to a wider range of listeners. The stylistic variety between the tracks creates interest while still maintaining the cohesive feel an album should have, both sonically (courtesy of producer and co-writer Jonathan Singleton) and thematically.

All in all, one of the lines in the title track might say it best: “I got a little rebel and I got a little lonely.” With her debut full-length project, Ashland Craft makes it clear that she’s here to walk her own path – whatever it takes and wherever that may lead – while being unabashedly herself. To us, it sounds like she’s off to one hell of a start.