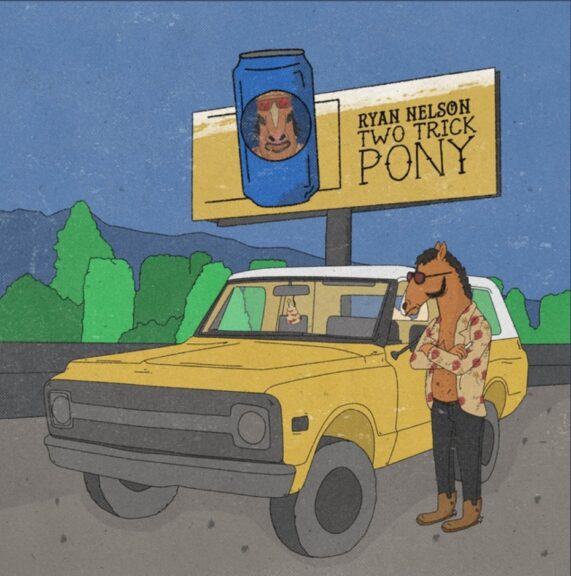 His Instagram bio says he’s a Floridaman, singer, and idiot – and if there’s one thing that can be said about Ryan Nelson, it’s that he stays true to who he is. Describing his sound in an interview with us more than three years ago, he said it’s “[a]uthentic country music with substance and a wild side. Loved by the ladies.  Respected by the guys.  I try to write songs that make people wanna go wild and chug beers, and also ones that make them cry, and ones that make ‘em miss their ex, or their brother, or their old dog.”  Nelson’s newest project Two Trick Pony encapsulates all of these things: it brings the heat, exudes honesty with a sense of humor, and moves effortlessly between taking a walk on the wild side and tugging on your heartstrings. Over the course of seven tracks, the EP packs a sonic punch that can kick the energy in a room up a notch without any filler.

Saturated with rock overtones, the title track sets the tone for the EP right away. Heavy guitar riffs and thumping drums lay the groundwork for Nelson’s opening confession:

“I’m a fan of misbehaving

Had my own run-ins with the law

I ain’t ever been the best at playing

But I’ve been known to write some songs”

While “authenticity” is a term we hear frequently in the country music universe, the sense that Two Trick Pony’s songs all come from lived experience is undeniable. “Losing Things” is a lighthearted take on one of Nelson’s natural talents: “they say I make it look easy but it comes right to me/ it never does seem to run dry/I’m a lover and a leaver and a little more the latter/but I’m right on the money every time.” Standout track “Same Mistakes” capitalizes on that same live-and-don’t-learn attitude in an upbeat and catchy fashion.

The EP, as a whole, has a sort of “take it or leave it” charisma derived from both the sense of self-awareness that permeates the lyrics and Nelson’s vocal delivery. A mix of swamp, smoke, and velvet, his voice carries the emotion of each track; from the rowdy “Me and Mine” to the gut-wrenching “I’d Still Love Her,” Nelson rises to every occasion. The backing vocals are particularly noteworthy on songs like “Wasn’t The Truck,” where adding a female voice heightens the already-significant emotional impact.

Two Trick Pony keeps a consistently high-key energy, courtesy of the production and arrangements. The small details showcase artistic and intentional placement –for example, drums and guitar put an exclamation point after “you met my momma” in “All My Dances,” another one of the EP’s standout tracks. That, in addition to clever songwriting, creates a record that rewards a careful listen just as well as it amps up a crowd.

Bottom line, this EP is a good time. Two Trick Pony’s seven tracks flow together seamlessly, pulling listeners in with a variety of relatable and memorable anecdotes. It’s a release that you’re sure to have on repeat, so make sure to give it a listen below and follow along with Ryan Nelson on Facebook, Instagram, and Twitter to stay updated.