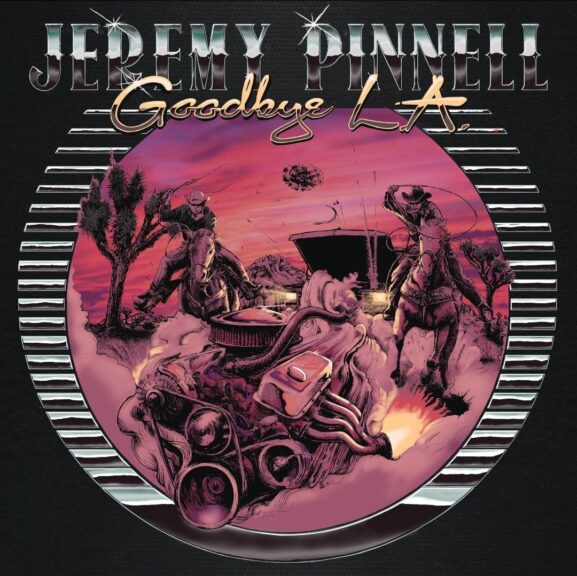 Jeremy Pinnell was running all over the country in 2018 and 2019 when he wrote the songs for his new album Goodbye L.A., slated to release this fall. The stops left a mark on Pinnell and found their way into his music, with different places leaving footprints on some of the songs he’s created for this new project. From Butte, Montana to Bakersfield, Pinnell soaked up the sights and sounds with the idea of home maintaining a continual presence in the background. In that sense, the first single off the new album, “Wanna Do Something,” finds him in a familiar place – somewhere in the endless in-between, set against a backdrop of sweeping classic country influences and a hard-worn, gritty edge.

Born in Ohio, while raised and currently residing in Kentucky, Pinnell grew up as a product of both places but rooted in neither. When it came to music, the raspy-voiced honky-tonk singer watched and learned, picking up a sense of rhythm from church songs and the rest from his dad, who played guitar, sang, and imparted some of his own musical taste on to his son, as Pinnell recalled: “I was just listening to Hendrix and thinking about my dad. I would always tell him I wouldn’t want to go to school, and we would drive around listening to the Beatles and Hendrix all day.” Eventually, a friend who worked in a record store introduced him to the likes of Billy Joe Shaver, Jerry Reed, and Johnny Paycheck. From there his listening tastes branched out into folk music, finding him diving deeper into artists’ catalogs to uncover the rest of the songs that his dad might not have wanted to play for him as a kid. This discovery is a continual process for Pinnell, who mentioned a George Harrison album as one of his most recent finds (“old new music is good”) and Willie Nelson’s “Me and Paul” as one song he wishes he’d written. “It’s one of the most incredible well-written songs and that’s what I love about Willie – just an artist who doesn’t cater to anybody. It’s powerful and that comes through in that song.”

It goes without saying that at some point, Pinnell caught the bug. His debut album OH/KY released in 2014, and now, seven years and one pandemic later, music is still what he does. When he wrote “Wanna Do Something” back when he was touring, it started out as a song about addiction and the idea of wanting something that you couldn’t achieve. Eventually, though, life as an artist began to alter the song’s course: “I wrote the line ‘the road got me praying for a 9-5’…we were touring so much and sending $200 a week home and that’s what an artist does. You always try to go home and work a straight job, but find yourself singing or thinking of a song idea on the way to work, and wanting to do something else.” Now, after being cooped up like the rest of us for the past year and a half, the idea of life on the road elicits a laugh from the singer as he explains, “I told my wife when I was 42 that I didn’t want to be 43 riding around in a van, and now I’m 43 and it’s all I want to do.”

Pinnell is the sole songwriter for “Wanna Do Something,” but he’s quick to credit the single’s polished, upbeat overall sound to the arrangements of Jonathan Tyler (who was tapped to produce Goodbye L.A.), as well as the band that executed them: Junior Tutwiler (guitar), Charles Alley (drums), Adam Nurre (bass/percussion/vocals), Daniel Creamer (Mellotron/piano), Cody Braun (fiddle), and Willie D (baritone sax). As a lead single, sonically speaking, it’s a fitting representative for what’s to come later this year. “I wanted like 80s Waylon, ZZ Top. My idea was that I wanted to write a record that made people happy. I want people to dance and have fun and love each other.” Pinnell’s goals for his music are as straightforward as the singer himself. “To try to be as truthful and honest as possible, that’s it really. If people take something away, I hope it makes them feel good or that they’re not alone. Simple things. Ultimately, I want people to find happiness.”

“Wanna Do Something” releases tomorrow, June 11, but we’re excited to premiere the video for it a day early here at Raised Rowdy.  We want to give a big thank you to Jeremy Pinnell and his team for taking the time to talk to us about this release, and make sure you follow along with him on socials (Facebook/Instagram/Twitter) and check out his website here.