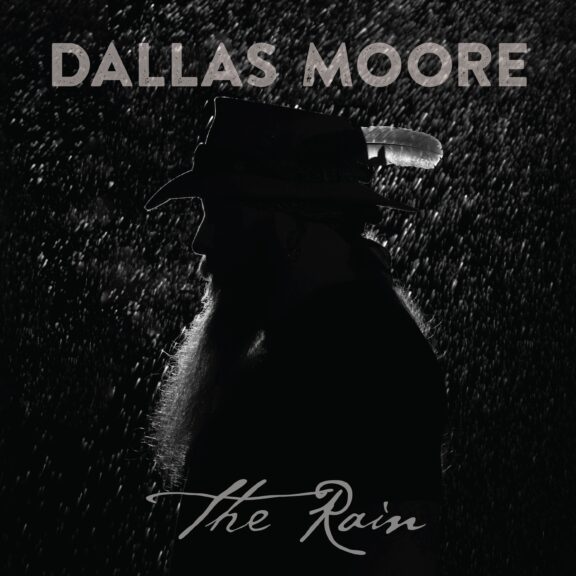 After Dallas Moore and his band were forced off the road last year shortly after the release of his 2019 album Tryin’ To Be A Blessing, the singer/songwriter buckled down and did what he needed to do – create new music. Nearly all of the songs on The Rain, his newest album set to release on April 9, were written as a result of the unexpected downtime Moore found on his hands. “I specifically remember writing the first song at our Honky Tonk Hacienda in Universal City, Texas on the night of March 18th, as we were scheduled to play in Austin that night and it was the first show of ours to cancel. The band and I were trying to figure out what the hell was going on over a bottle of fine Kentucky bourbon and a case of Lone Star beer. I got up to get us another round and the song ‘Better Days’ came to me like a lightning bolt out of thin air. I put the drinks on hold, sat down on the couch, and wrote the song in one steady stream of lyrics contemplating what was happening in real-time as our world of being a touring band — playing over 300 nights a year — was coming to a screeching halt and the future was imminently unknown.”

While it was created during the pandemic, and songs like “Better Days” and “Locked Down and Loaded” grapple with the situations that many have found themselves in as a result of the events of the past year, The Rain stands on its own as a natural progression of Moore’s singular brand of gritty dive-bar country.  His sound is that of the whiskey ring left by a glass on a bartop, the sun-shimmer glistening where the horizon meets the road in front of you, or the unassuming roadside restaurant that ends up serving the best burger you’ve ever had  – it’s grizzled, expansive, and worn-in just right.

Kicking off like a powder keg, the album starts with a title track that beckons “so take me as I am my dear/and I’ll take you far away from here/and live that life we live out in our dreams.” The next track keeps that same energy as Moore growls through “Every Night I Burn Another Honky Tonk Down,” where he moves from one good time to the next via two wheels, rumbling pipes, and the wind in his face.  “Ain’t No Place In The Sun” further embraces the rough-and-tumble sound Moore created for The Rain: “and if the devil looks like you as you’re looking in the mirror/when it’s all been said and done you might see your soul much clearer.”

While the songs themselves are explosive, the backing musicians’ contributions form the figurative flame racing up the fuse. Moore explained: “We returned to OmniSound Studios in Nashville, Tennessee in August to track the 10 songs for The Rain. Dean Miller was once again at the helm in the producer’s chair and we had my ‘Honky Tonk Dream Team Band’ of players assembled again to bring these songs to life. Along with Lucky Chucky (Chuck Morpurgo, my guitarist of 25 years) we had Guthrie Trapp on Electric Guitar, Jenee Fleenor (CMA Instrumentalist Of The Year) on Fiddle, Chad Cromwell on Drums and Percussion, Steve Hinson on Pedal Steel and Dobro, Gordon Mote on Piano and B3 Organ, Lex Price on Bass, Tim Galloway on Acoustic and 12 String Guitars, Sweepy Walker on Harmonica and Perry Coleman on backing vocals.”

The Rain’s hard edges give it the bite that many listeners seek in the neo-traditional, outlaw country movement, but Moore’s sound translates just as well to the album’s tender, more reflective tracks. “On Through The Night” stands as a testament to both love and faith, while “In My Last Days” caps off the project by looking at a legacy and the good that’s left behind after someone dies.  “Blue Jean Jesus,” one of the album’s standout tracks, finds Moore adopting a storyteller’s role to offer a reminder and that we can often learn a lot from the people we overlook.

The project is an easy listen overall, which is perhaps due to the manner in which it was created. Speaking about the process, Moore recalled: “These sessions were the most relaxed and enjoyable of my career. We had a lot of laughs and grins as the songs took shape and came to life very organically and we got most of them in one or two takes which gave everything a very loose and live feel which is what I’ve always wanted to capture in the studio. I think this album is my most focused and realized yet and another step in my journey as I kick the can a little farther down the road.”

We’re proud to give you an exclusive early listen to the entire album here at Raised Rowdy before it’s available everywhere this Friday. Make sure to give it a spin at the link below, and follow along with Dallas Moore on Instagram, Facebook, and his website to tag along as he keeps on kickin’ that can.