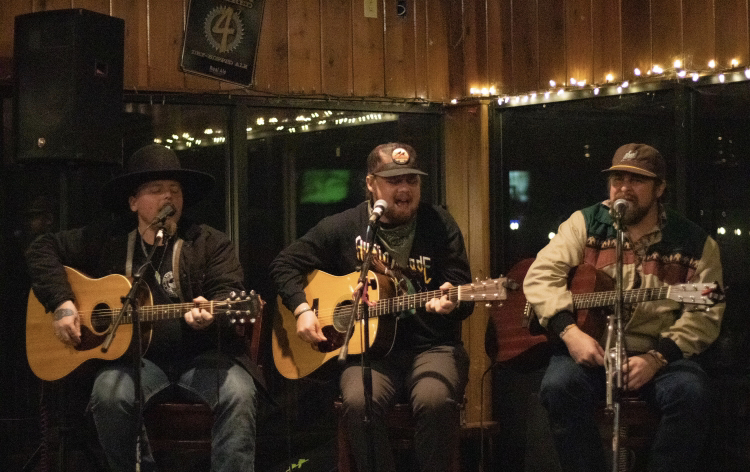 The Cowbirds Release New Live Single ‘See you Down the Road’

Live releases are often hit or miss with a lot of bands. With The Cowbirds, however, they take the simplistic approach of 3 guys with guitars and absolutely nail it. Mason Morris, most notably the bassist for Koe Wetzel, Buck Fuffalo, a singer with a perfect country and soulful sound, and Matt Hartman, a skilled musician who holds his own, are The Cowbirds.

“See you Down the Road” was released on March 12th. The single was recorded live and is the definition of heart and soul in its purest musical form. The storytelling is phenomenal, but the parts that grab you are the harmonies and the way these musicians effortlessly gel together.

The guys knew each other from living in Stephenville, TX, and also through one another’s music.

“When we did sound check for our first show as a song swap, Mason started hitting harmonies to a song of mine. It was so fitting and when that song was done during soundcheck, he goes ‘this is gonna be a good weekend,’” Fuffalo explains. “By the next show, he was teaching me harmony parts to a Wade Bowen song and we decided on the way home that this was gonna be a thing.”

Fuffalo states that the main expectation for the band is to just be a fun side project that they can all contribute to when they are not doing their main gigs.

“My expectations of this group are to have fun, write some killer tunes and grow as a musician,” Morris says. “I am a bass player though and I love my Konvict band mates, so I’m not going anywhere!”

Fuffalo wrote “See you Down the Road” after their first week on the road with Morris and Hartman. He remembers checking his memories on his phone once he got home, which consisted of road adventures with other songwriters in California.

”The combination of those two moments made me grateful I am able to be able to travel and see the world playing music,” Fuffalo explains.

Hartman says it best: “The songs coming out are great and really highlight each of our abilities in a very organic way.”

Remember to support The Cowbirds on social media (Facebook/Instagram) and Spotify and keep an eye out for their upcoming album dropping April 9th!