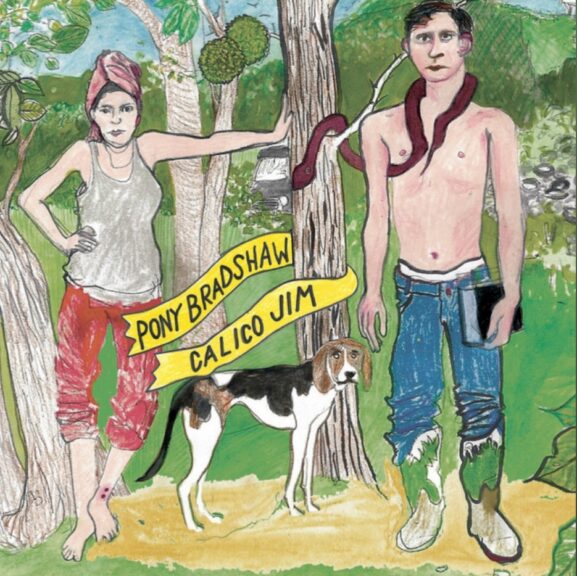 “My ultimate aim was for this to be a true record of an experience, a capturing of sound and sweat and intention. A human artifact,” says North Georgia resident Pony Bradshaw, speaking about his new album Calico Jim that released January 29. “To bring it into the physical world was essential. I wanted it to live and breathe, to die, to get lost, and then found. I hope that’s what’s heard when it’s spinning in your living room or playing through your car speakers on your way to work. I hope you can hold it in your hands and feel the life we put into it, and I hope you feel it wasn’t in vain or a waste of your time.”

“Artifact” – it’s an interesting term to use for a new release, but in this case, it fits. While there’s always a tendency to try and define an artist’s sound by comparing them to other, more well-known artists, Bradshaw’s Calico Jim draws a different sort of parallel: it’s almost as if Ralph Waldo Emerson and Henry David Thoreau came together to inspire these ten songs, injecting that transcendental belief of finding the divine in nature and humanity into a folk-tinged, ethereal storyteller’s album that curls in a dream-like mist through the Appalachian foothills. Peering beyond the façades slapped on the surface of the region by decades of stereotype, Bradshaw fuses the earthy and the intellectual with Calico Jim, creating a space in time where the biblical, literary, and philosophical find themselves right at home alongside fried catfish, morels, and arrowheads.

Across the board, Bradshaw’s incisive songwriting makes both the characters and their environment three-dimensional, immersing listeners in the reality of each song’s vignette. Standout track “Guru” tells a tale of a “mennonite woman with a lazy eye” and a summer where  “we got high as the heavens/washing each other’s feet/in the red glow of madness/tweaked out on God and crystal meth.” The intriguing juxtaposition of that type of imagery continues throughout the album, adding layers upon layers of detail to the stories Bradshaw weaves. There isn’t a song that goes by without a line or two (at the very least) that will stop you in your tracks, especially in light of the ways in which Bradshaw can manipulate his voice. It soars to an exclamation for the chorus of “Jimmy the Cop” (“and I was born already dead/and just like you I hang my head/to study these dreams for signs of life/our souls slip loose from body by night”) and drops down to an admonition in tracks like “Let Us Breathe” (“time don’t stand still, you fools”).

Gorgeous, understated musical construction puts the focus on the stories themselves and lends the album a natural, cohesive feel throughout. As just one example, the way the haunting fiddle in the beginning of “Sawtoothed Jericho” gives way to electric guitar riffs creates the perfect setting for each of the song’s verses. Even in a background role, the instrumentation on Calico Jim is a powerful and inseparable part of each one of these stories; making the highs higher and the lows lower, each piece heightens the impact of Bradshaw’s educated and careful songwriting.

The sound itself, of course, is influenced by the relationship between the musicians who came together to record it. “When I decided to bring Calico Jim to life, I had a strong notion of where I wanted to record it and who I wanted to involve in its making. I wanted friends to play on it, certainly, and I wanted their friends to play or work on it, too,” Bradshaw explained in a press release. “There’s a certain hard-earned knowledge, a fastening of spirits, gained from toiling with friends…In the trenches, glasses clinking, wore slap out, but wholly content.” Those friends include Cody Ray (guitars and lap steel), Aaron Boehler (bass), Paddy Ryan (drums and percussion), Philippe Bronchtein (pedal steel and Hammond organ), Casey Collis (fiddle and banjo) and Jason Weinheimer & Zachariah Reeves (mixing board). Bradshaw was the sole songwriter, and the album was recorded at Fellowship Hall Sound recording studio in Little Rock, Arkansas.

Bottom line, Calico Jim is the kind of project that offers something new with each additional listen.  It’s a rich and rewarding album and will likely leave you spellbound from start to finish. You can follow along with Pony Bradshaw on Facebook, Instagram, Twitter, and YouTube or check out his website here.