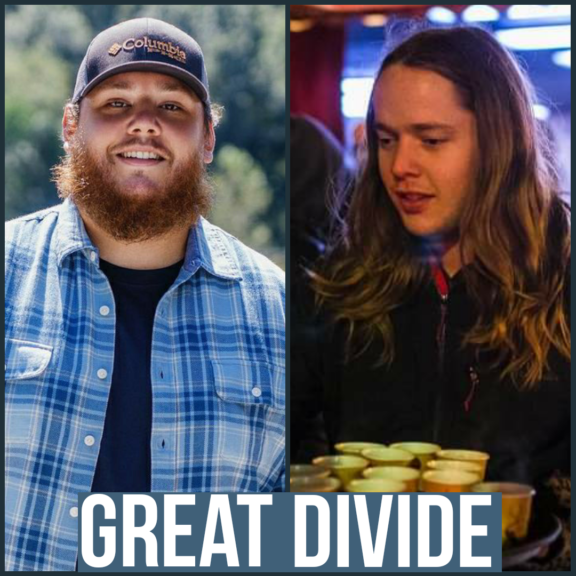 Luke Combs and Billy Strings collaborate on a new song, “The Great Divide,” out today—listen/share HERE.

Of the song, Combs shares, “Something that I’ve always wanted to do is write and put out a bluegrass album. This is a song that was supposed to be a part of that project. It’s not a lead single or a lead-in to that project yet, because that is not done. But it felt like the right time to put this song out. When we wrote it, there were a lot of crazy things going on in the world. There’s still a lot of crazy things going on in the world. And I just felt like I had some stuff to say. It’s not meant to be political. It’s not meant to try and tell you what to think or tell you how to believe. That’s not my job. It’s just a guy kinda saying the way he was feeling when he wrote it.”

Strings adds, “This song is our interpretation of the conflicts and tension we had been witnessing/ experiencing around the time we wrote it. We wanted to shine a little light on the situation and offer a bit of hope during what has been a tough time for many.”

About Luke Combs
Luke Combs, who The New York Times calls, “the most promising and influential new country star of the last five years,” is a multi-platinum, ACM, CMA, CMT and Billboard Music Award-winning artist from Asheville, NC. In the past year, Combs has received widespread attention, including for the release of “Six Feet Apart,” which he wrote last summer as a reaction to the pandemic. The song received an overwhelming response including praise from Entertainment Weekly, Billboard, Associated Press, The Tennessean and Rolling Stone , who proclaimed, “it sums up everything we’re all feeling, thinking, and dreaming about…it’s easy to be cynical right now, but Combs and his co-writers succeed in manifesting some semblance of hope,” while MusicRow declared, “The mighty Luke Combs strikes again. He shines a pinpoint spotlight on our current crisis with a terrific tune.” “Six Feet Apart” appears on What You See Ain’t Always What You Get—Combs’ new deluxe album which debuted at No. 1 on the all-genre Billboard 200 chart as well as Billboard’s Top Country Albums chart this past November. The deluxe edition features all 18 tracks from Combs’ double Platinum-certified, global No. 1 album, What You See Is What You Get , as well as five new songs including “Six Feet Apart” and “Forever After All,” which debuted at No. 2 on the all-genre Billboard Hot 100 chart—the highest entrance ever for a male country solo artist. Adding to his record-breaking success, Combs achieved his tenth-consecutive No. 1 single at country radio earlier this year—a first on the Billboard Country Airplay chart—and recently made history as the first artist ever to have their first two studio albums spend 25 weeks or more at No. 1 on Billboard’s Top Country Albums chart—breaking Taylor Swift’s previously held record at 24 weeks.

About Billy Strings
Michigan-born, Nashville-based, Billy Strings is a GRAMMY-nominated singer, songwriter and performer, who has arrived on the music scene as, “one of string music’s most dynamic young stars” (Rolling Stone). Strings is in the midst of a landmark year following the release of his critically acclaimed new record, Home, which is nominated for Best Bluegrass Album at the 63rd GRAMMY Awards and led Strings to top Billboard’s 2020 year-end chart in both Bluegrass categories: Top Bluegrass Albums Artists and Top Bluegrass Albums Titles. Produced by Glenn Brown, Home continues to receive widespread critical acclaim—the Associated Press proclaims, “it is his creative musical storytelling, paired with solid vocals on Home that should seal the deal, pleasing fans of the genre and creating some new ones…the perfect blend of pure talent and pluck,” while The Wall Street Journal declares, “Billy Strings has clearly emerged as a premier guitar flatpicker of this era.” Since his debut, Strings has been awarded Guitar Player of the Year and New Artist of the Year at the 2019 International Bluegrass Music Awards, selected as one of Rolling Stone’s “New Country Artists to Know” and performed on “Jimmy Kimmel Live!” and PBS’ “Bluegrass Underground.” In addition to this success, Strings has also raised over $100,000 for charity in the past year through a series of livestream and socially distanced concerts.