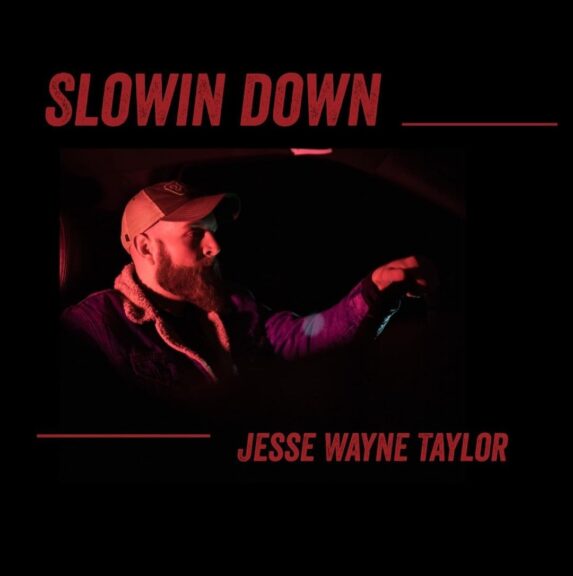 After releasing a live album in 2019 and one single last year, Tennessee native Jesse Wayne Taylor is set to release his new EP Slowin Down on Monday, February 1st. The five-track project comes from a personal place for Taylor, who gave us a behind-the-scenes look at how the EP came to be: “Slowin Down. That’s what I am doing. It’s way too easy to stay moving too fast, and when you do, you miss out on the important things. I worked very hard, sacrificed and saved for a long time to make this EP happen. It’s been tough but it has certainly been an amazing journey. I met Ryan Youmans a few years back while he was playing bass for a friend of mine. We kept in touch as time went on, and after I left my job at Nashville Armory back in 2019 I reached out to him in hopes we might be willing to take myself and the project on at his studio, The Amber Sound. Fortunately he agreed, and we completed this project between the two of us in two days.  After it was all said and done, we had a piano and guitar player come in to throw on some extra polish as well. I learned so much while working with Ryan. He helped me get to where I wanted to go, and further. I am very proud of these songs, and I was fortunate enough to write them with some awesome songwriters. These songs are honest, and from the heart. I hope they make you feel something.”

As Taylor said, “honest and from the heart” is the sentiment that takes center stage throughout the whole EP. Slowin Down’s stripped-down feel puts the spotlight right where it should be for these five songs – on the songwriting and Taylor’s vocals. Earnest with a hint of gravel, Taylor’s warm voice rises and falls with the emotion of each song, moving with ease from the more upbeat “Slowing Down” to the somber and reflective look at a relationship in “The Part.” The project has a little something for everyone, from love songs like “Shoot You Straight” to heartbreak songs like “Lonesome and Blue.” That being said, one of the EP’s undeniable standouts comes from the nostalgia-soaked “Papa’s Paycheck,” which we’re excited to premiere for you here today exclusively at Raised Rowdy.

If you’re lucky, you had someone you looked up to as a kid who taught you the important things in life – to be generous, to love, to keep your knife sharp, and to have a healthy respect for the power of good music. With that in mind, make sure you’re prepared to shed a tear or two the first time you listen to “Papa’s Paycheck.” The track highlights the seemingly small, everyday moments of growing up – a passing conversation, a ride in a pickup truck, or a broken cassette player – that become so much more than that as you become an adult. Gentle, spiraling guitar lays out the tie between music and memory throughout the song, leaving listeners spellbound as the imagery sets up the verses like fuzzy, sepia-toned old photographs.

Explaining the story behind the song, Taylor said: “If you like songs about good grandaddy’s and Johnny Paycheck, then you are gonna like this song. Papa’s Paycheck was one of my earliest co-writes. I asked my buddy Cody Walden to write a song with me one night at the Tin Roof on Demonbruen, and he said he had one the next morning with a friend from Georgia named Chase Daniel. He asked if I would like to join, and I obliged. Chase came to the write with the idea.  He said, “You know man. Papa shared his Paycheck. Like my granddad shared Johnny Paycheck, and his actual paycheck at the same time.” I immediately loved the idea. I loved both of my grandfathers dearly, and I try to be like them daily in certain ways. We sat around for quite some time sharing stories about each of our grandfathers. As soon as the melody came, the words followed quickly behind. By the time we finished we felt like we had all paid homage to each of our grandfathers along with one of country music’s greats, Johnny Paycheck. Don’t forget to pass on good music to your kids!”