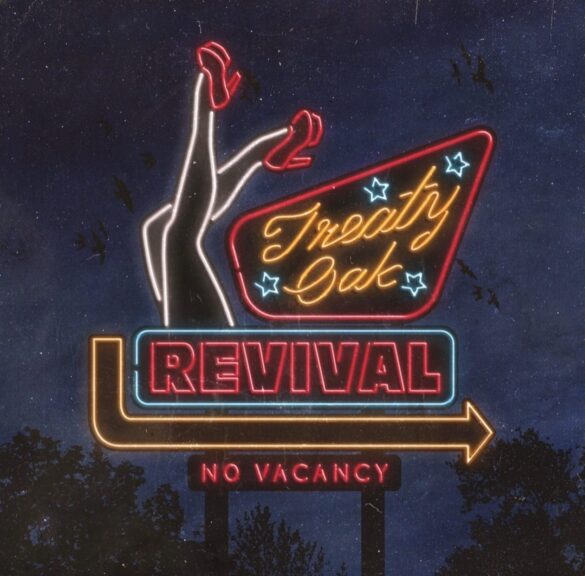 Sometimes you come across a band or artist right at the beginning of their journey and it’s immediately evident that they have something special. As a relatively young and independent band from West Texas, Treaty Oak Revival falls into that category with a grungy brand of Texas country that seems poised to carve out its own niche in a path that was blazed in recent years by bands like Whiskey Myers. Founded in 2019, Treaty Oak Revival only had two singles out by the end of 2020 (a live cut of “Ode to Bourbon” that came out last January, and “No Vacancy” which dropped in November),  but that stands to change with the release of their debut full-length album No Vacancy.

Treaty Oak Revival consists of Sam Canty (lead singer/acoustic guitar), Lance Vanley (rhythm electric/background vocals), Jeremiah Vanley (lead electric), Andrew Carey (bass), and Kelly McKay (drums). Their sound is rooted in Texas/Red Dirt country but draws from southern rock and punk influences (evidenced by the punk-tinged electric guitar that puts a chip on the shoulder of “Irish Goodbye”), ultimately leading to a combination of styles that make the end product raw and refreshingly rough around the edges. The same could be said of the album’s subject matter, as the nine-track project dives right into hard living with “Boomtown,” a wild ride fueled by booze, a wry sense of humor, and undeniable energy. These themes carry through No Vacancy as a whole, as the band spells out: “No Vacancy is an album that deals with substance abuse and bad relationships. Every song on the album is almost like a different room in this booked motel. All of those rooms and songs tell a different story. You get to be a fly on the wall for each one of these stories. A lot of people were asking for an album and we did the best we could. We hope y’all enjoy the ride through each of the songs!”

The album’s songwriting (a collaborative effort from Sam Canty and Lance Vanley) captures the multifaceted nature of dealing with things like addiction to add a layer of insight and vulnerability that pulls listeners even deeper into the nuances of the project. Standout track “Ode to Bourbon” mixes equal parts desperation and resignation in both the instrumentation and the lyrics: “but I’ll still take a trip to that old liquor store/ and buy a bottle of rye and end up on the floor/They call it addiction, but I see it as an old friend.” Songs like “Postcard” and “One Time Thing” both incorporate a clever sense of self-awareness in the lyrics, featuring protagonists that come to full-circle realizations by the end of the songs. The songwriting also comes to the forefront in the title track (“She comes and she goes and she always says goodbye/And I’d give anything just to be by her side/Got a bottle and a room and a motel key/And a broken heart with no vacancy”), where persistent drums and dive-bombing guitar serve as an ideal backdrop for Canty’s raspy, emotive vocals.

As the album’s diverse cast of characters play out their roles in their respective songs, the stories, when taken together, stand as a testament to one of the best qualities of releasing music in an album format: the overarching sense of interconnectedness. For example, you can’t help but wonder if the woman in “Tattooed” is the same one on the other end of the line in “Missed Call,” or notice that the themes of heartbreak and alcoholism seem inextricably intertwined. Overall, No Vacancy takes a compelling look at the flaws that create these situations and inherent sadness that results.