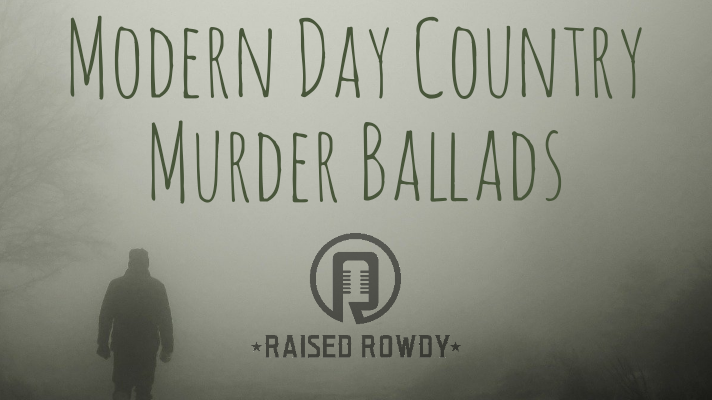 The Good, the Bad, and the Creepy: Modern Country Murder Ballads

It’s a well-known fact that prodding the dark underbelly of human nature is something country music does especially well. The stories are as old as the music itself: people giving in to temptation, acting on impulse, or seeking revenge. While this darkness comes in many forms in country songs, one of the strongest traditions in country music (and all of its subgenres) is that of the murder ballad.

There are plenty of songs that deal with death, but murder ballads are in a category of their own. They have to be storytelling songs where the narrative itself is a central focus, and, obviously, somebody’s going to have to get killed. Artists like Willie Nelson, Lyle Lovett, and Johnny Cash have all left murder ballads as part of their legacy, but there are still some artists that have been carrying that torch from the 2000s until today.

I’ve laid out some of my favorite modern murder ballads out for you here; they come in a variety of styles, ranging from contemporary country to folk/bluegrass and Southern rock. Check these out if you’re looking to add some intrigue to your country playlists, and let us know if we’ve missed any of your favorites!

These are our vigilantes, acting to protect somebody else. It’s hard not to root for them as each of their plans unfold.

Butts’ chillingly cool-headed plan to protect the woman that raised her ends badly for a man that took things too far in this high and lonesome tune.

Pounding drums and McBryde’s powerhouse delivery leave no doubt that she’ll deliver on her promise to keep her Momma happy any way she can, even when that involves a shovel and her Daddy’s lover.

This Erik Dylan tune stands out from the rest since his storyteller isn’t the one doing the killing, but the rock-tinged track makes it crystal clear that this guy had it coming. Even the neighbors know that some things just can’t be forgiven.

These are our outlaws, driven by revenge, jealousy, or desperation. Some get caught and some don’t, but all of them have a tale to tell. Their stories fall into a grey area – was it justified, or did they take it too far?

One of the country/folk/Americana scene’s fastest rising artists just dropped this rhythmic and ominous song as part of his new EP Quiet, Heavy Dreams, which released in November. While we don’t really know the final fate of his victim, Bryan’s narrator makes it clear that there’s a heavy price to pay for betraying his love.

This one has been around since the 2000 release of Reckless’s album The Day and was famously covered by Cross Canadian Ragweed for their album Live and Loud at Billy Bob’s Texas. Being on the lonely end of leaving doesn’t sit well with Crazy Eddie, and chaos mounts to a crescendo in what may be one of the catchiest murder ballads of the last two decades.

Down the River – Chris Knight

When his brother dies after a bar fight, Knight’s narrator sets out a plan for revenge that starts in the murky depths of the river and ends in a secret he’ll never tell.

A majority of Childers’ songs are firmly rooted in his home of Appalachia, and his murder ballad is no different. Searching for arrowheads and other relics is a common pastime there, including the type of prehistoric spearhead for which this song is named. In Childers’ tale, a desperate man starts out digging for valuable clovis, only to end up needing to dig a grave after his companion finds one and he doesn’t.

Bluegrass has its own unique way of enhancing the story in a song, as you can clearly hear in this track off the North Carolina group’s 2007 album Last Train to Kitty Hawk. Coming home from work early wasn’t quite what one man expected, and “Now the sheriff is searching for the owner of a shotgun/Who left two lovers frigid in the early morning light.”

If you’ve ever wondered what you get when you mix a two-timing husband, cyanide, and an unassuming bed of roses, Rainer’s feisty cheating song has a story for you. This is a fairly recent release but the catchy, upbeat tune adds a little extra excitement to one man’s demise.

Guilty As Can Be – Cody Johnson

With his standout vocals and storytelling ability, Johnson takes listeners along for the ride as his narrator speaks out from the jail cell where he wound up after finding his spot in the driveway (and in his bedroom) otherwise occupied.

Opening with the image of a raven mocking him outside his prison cell, this track highlights the menacing qualities of Wall’s baritone voice as it looms over the story of Kate McCannon’s betrayal.

The darkest of the murder ballads, these rely heavily on the element of mystery to make listeners’ skin crawl, verging on the macabre with each interwoven verse.

Dead on the River (Rolling Down) – Ian Noe

One of the standout tracks on Noe’s 2019 album Between the Country, this is a singularly haunting tale that takes a sinister twist as listeners realize whose perspective they’re really hearing.

This Tom Petty-esque tune comes as part of the Portland-based country/folk/rock group’s 2008 album Furr. The creepiness of the opening verse is only accentuated by the narrator’s seemingly nonchalant attitude towards the murders he commits, imbuing the entire song with a disquieting sense of evil.

Straw in the Wind – The Steel Woods

In this title track off the group’s 2017 album, dark and ominous Southern rock stylings set the scene for a small town with a string of seemingly unexplained disappearances:

“If the mouth of this river could talk, here’s what it would say:
If you come here with good in your heart, you’ll be on your way
But I’m not the one here who judged another man’s sin
Or made strangers ’round here disappear like straw in the wind”