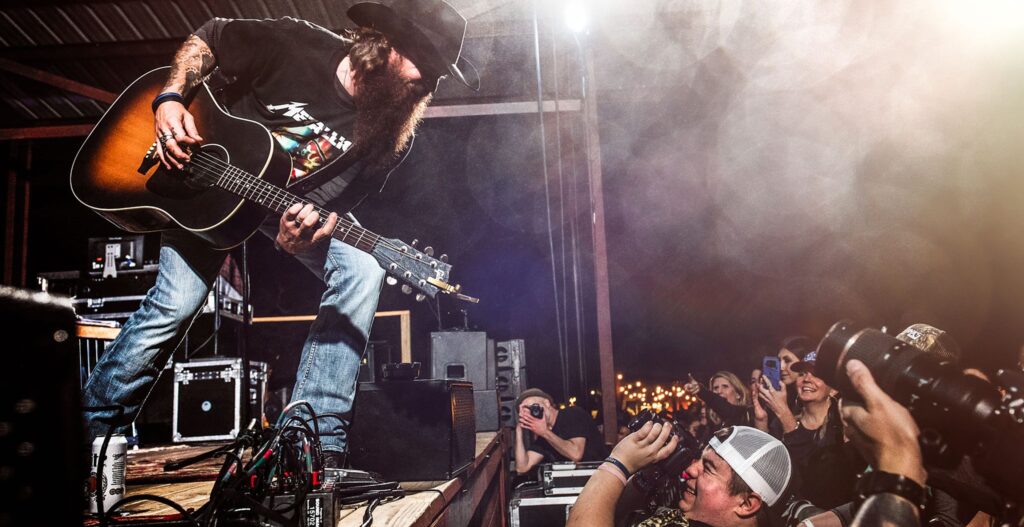 Framing the Sound: Photographer Andrew Quinn and His Work Around the TX/Red Dirt Scene

During his sophomore year of high school, Andrew Quinn first picked up the camera and began his work as a photographer.

“I had become close with Cody Canada and his amazing family through an elementary and middle school that I attended along with his two kids, Dierks and Willy, who are now in an amazing band themselves called Waves,” Quinn remembers. “During one of the shows that I was at of his, Cody and I started to talk about the fact that I had purchased a camera. Cody said to bring the camera to a show and he said that people photograph concerts all the time and if I hated it, never do it again but if I liked it, it could be  good hobby. 7 years of a career later, here I am.“

Even before Canada’s influence on him, Quinn was obsessed with music. Growing up on 2000s country like Kenny Chesney, Eric Church, and Brad Paisley, he wanted to be a musician at first.

He goes on to say, “I know that God was in charge the whole time because it all ended up back in the music industry, just in a different aspect and in a different scene. I found Texas Country when we moved from Fort Worth to New Braunfels, TX when I was going into fourth grade. I had a friend at school who sent me a link to Diamonds & Gasoline by Turnpike and I was hooked from then on. Every chance I get, I thank her for that because without sending me that song, I don’t know if I would have become interested in the Texas scene which led to me being interested in Cody as a musician rather than just a cool dad in the school hallways.“

Quinn’s first big act that he got to work with was none other than Turnpike Troubadours. Since his first time shooting for them in 2017, he worked with them a few more times until their hiatus a few years back.

“Another big one that comes to mind is Radney Foster. I grew up listening to Radney’s music and songs he’d written that major label artists had cut. Getting to shoot for him at Gruene Hall was a pretty surreal moment in my career that I always smile at when I think about it.” Quinn explains, “He was so gracious and we had a great conversation about what it meant to be an artist and he gave me some amazing advice on how to move into the next chapter of my career which at that point was going from a kid with access to a business owner with ‘skills and bills’ as he put it.”

Recently, Quinn got off the road after touring with Shane Smith & the Saints for almost two years. He recalls the venues and moments he was able to capture at places including Red Rocks and ACL Live in Austin.

“After getting off the road, I realized that I had kind of neglected to be a teenager and young adult since I started all of this. I never went to parties, I missed birthdays, and I never just got to hang out anywhere with people who weren’t in the music industry,” says Quinn, “With that being said, instead of going for another tour gig, I am back to the freelance work I did before touring, trying to be home a little more and be there for events and people I care about. I am also super excited to be working closely with a few younger guys in the scene. It’s been fun to see this other side of it all again and watch the drive these younger dudes have.“

When asked to explain the best part about what he does, Quinn summed it up perfectly:
”The best thing about being a concert photographer is all of the people I get to meet and work with along the way. I have had the benefit of getting to know some of the best and most genuine people in the world. All of us are following a dream and we recognize that in each other which adds this level of respect and camaraderie that I don’t think many others would understand. Grinding it out from the beginning and seeing artists like Koe and Parker get the recognition they worked so hard for and deserve is so rewarding. I remember when these guys were playing the very first slot at summer festivals for almost no money to less than 30 people, so to see all of them finally getting their due is really cool. I have been able to make family out of a lot of these people. There are some musicians and industry pros that I’d call for help before extended family because once you spend time with them, you see how passionate they all are for life and even though they achieve certain levels of fame, they’d still give you the shirt off of their back when you need it. So, yeah, the people are the best part of it all.”
Follow Andrew Quinn and all his work through the links below:
Website: https://aqphotostx.com/
Facebook: https://www.facebook.com/profile.php?id=100009389225906
Instagram: https://instagram.com/aqptx?utm_medium=copy_link
Twitter: https://twitter.com/a_q_photography?s=21