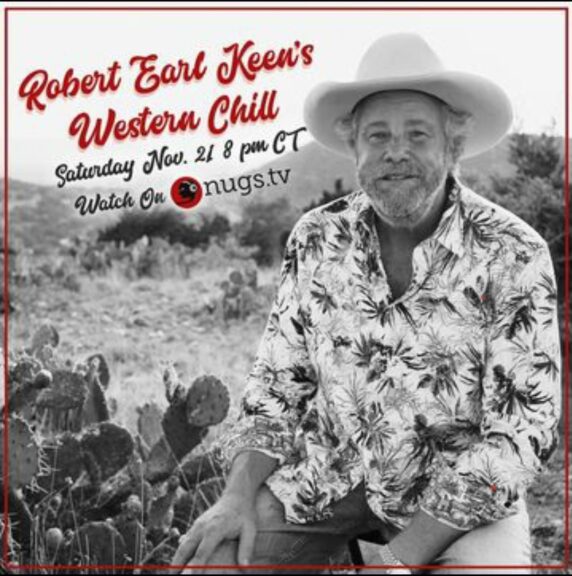 This Saturday night, Robert Earl Keen and his band are partnering with nugs.tv to premiere a recorded performance of his new project, Western Chill, which features 14 new and previously unrecorded songs. Known for his storytelling abilities and signature raspy voice, the prolific singer/songwriter has released 20 albums over the past few decades that have inhabited a wide range of sonic landscapes.

This new project, however, is a product of the times. While an album premiere show may have looked very different for Keen in the past, he’s found a way to adapt, create, and overcome with this online event, which will air at 8 p.m. CST. Filmed at Keen’s own Snake Barn Movie Ranch Studios, Western Chill kept Keen and his crew working during this period of uncertainty for so many in the entertainment industry.

We got the chance to catch up with Keen in advance of his performance to talk about the creation of this album, his influences, and a little bit about his career.

Raised Rowdy: You’ve been a pillar of the Americana genre since its inception and you’ve had a podcast for a while now that focuses specifically on artists that fall in that spectrum. Given that Texas Country has such a strong sense of identity within the music world – and really stands as its own microcosm – to what extent do you still think of yourself as a “Texas artist” within the Americana scene and how does that inform the new music you’re putting out?

Robert Earl Keen: Texas Country has held its own for a long time, and I’m proud to be a part of its legacy. What Americana has to offer is a very broad spectrum of artists, all of which are bringing in new and exciting aspects from their own regions into this one community. It’s a very exciting time to be working in music now because there is so much great work coming from these artists, and it’s influential because it has opened up a new realm of inspiration and possibility. Not only in songwriting, but in things like instrumentation and production. You can’t just keep holding on to the past, I want to be a part of this new era in music and in Americana music in particular.

RR: You’ve said that Western Chill is more of a collaborative project than some of the albums you’ve done in the past – what was it like putting this together with your band given the current climate of social distancing, massively scaled-back touring, etc? What were the biggest challenges, and in what ways did your album-making process stay the same?

REK: I have to say that Western Chill was a blast to put together.  When the pandemic hit and touring stopped, I knew I had a choice.  I could bury my head, or I could dig in and use this time to create something new.  We had this barn that for years we called the “snake barn” because it was, well, full of snakes.  We cleared it out and built a film studio inside. The band came over and we hung-out, safely distanced, and we wrote and shared songs.  The way you would imagine a band would gather to create new music.

Western Chill features songs written by other members of the band too, which is exciting to share.  We recorded the concert live in the Snake Barn Studio and are going to release it as a concert album next year.

RR: Were the songs on Western Chill all written during the pandemic, or are they ones you’ve had for a while? If they were written recently, what was that process like?

REK: Most of the songs were written during the pandemic.  A couple of them I have had for a while and had performed live.  One of the songs, an instrumental by my mandolin player Kim Warner, was literally written on the spot, the day we were recording.  Kim composed the melody and then as a band we jammed live creating the piece.  The title track Western Chill is really a song I felt like we all needed at this time.  An invitation to all to just breathe and chill.

RR: Who/what were the biggest influences on the serene, relaxed sound and style you’ve developed for this album and performance?

REK: Western Chill really wasn’t influenced by any particular artist; it was more conceptual in that it’s an idea of a state of mind and the music is intended to invoke that spirit.  I’m excited to see how people react to it after the debut this weekend.

RR: Speaking of influences, and in light of your own songwriting achievements and the time you’ve spent around legendary songwriters like Guy Clark and Townes, are there any songs you can point to that you wish you’d written?

REK: That is a tough question, I would have to say Jackson Browne’s “Late for The Sky.”  I just love the production on that record.  As for Guy and Townes, there are too many to try to select a few.  They are of that level all you have to do is utter names and just shake your head knowingly.

RR: Finally – the awards and recognitions you’ve accumulated over the course of your career are far too numerous to list here, but how do you personally measure your success?

REK: You are very kind. I tell you, I measure my personal success by the happiness of my family. As simple as that.

We want to give a big thank you to Robert Earl Keen and his team for taking the time to talk to us about this upcoming performance. Make sure you tune in Saturday night at 8 p.m. CST, and get your tickets in advance of the pay-per-view concert here for $10.