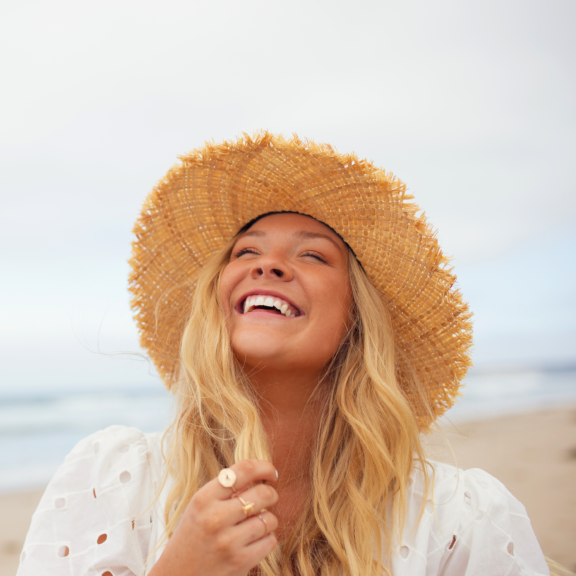 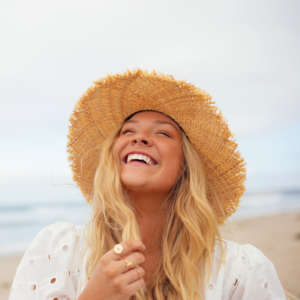 Fueled by charisma, sunshine, and adventure, new country artist Claire Wright is committed to “living a life worth writing songs about,” which she acknowledges as her motto as well as an excuse for wild behavior. Making her way from Northern California to Nashville with a few spontaneous-turned-serendipitous encounters along the way, Wright has found a home in Music City as a published writer for Universal Music Publishing Group (UMPG). She has also just released her debut single “I Could Use A Beach”, a song she wrote alongside Ben Glover and Colby Wedgeworth. Co-produced by Jimmy Robbins (Maddie and Tae, Gabby Barrett, Keith Urban) and Eric Arjes,  Wright’s introductory track augments and appeases the desire for a warm escape with references to fond nostalgia and vivid beach-side bliss. Having been described as reggae country, Wright’s sound is a comforting sonic cocktail for country music listeners and beach lovers alike.

I got to sit down with Claire and talk about her start in country music and get to know some of her inspirations in music today:

Taylor (Raised Rowdy) – I really resonated with “I Could Use a Beach” the second I heard it… what’s the story or inspiration behind it?
Claire – “Writing I Could Use a Beach came in a moment where my co-writers and myself needed an escape… Sometimes life can simply be too much and ya just need a beach! And that’s exactly what we were needing to express. I tend to be my happiest somewhere near the water and this was my venting/love letter to the feeling I get when I’m relaxing at the beach.”
Taylor (Raised Rowdy) – What made you want to become a country music artist?
Claire- “I want to write and perform music that tells my story. Country music has a magical way of captivating life into lyrics and melodies that is incomparable. The honesty, the storytelling, the FUN that lives within country music is something I forever want to feel!”
Taylor (Raised Rowdy) – Who is your dream collaborator?
Claire – “Jack Johnson! His songwriting and ability to capture moments has impacted me since day one. To collaborate with him would be all time!!”
Taylor (Raised Rowdy) – What inspires you to sit down and write a song?
Claire – “Short answer, living. I always say my motto is, ‘live a life worth writing songs about.’ When I feel or experience something I’ve never experienced, inspiration flows like crazy. Travel, connecting with people, and having a damn good time is generally sure fire for some writing for me. That or nice old fashioned heart break.”
Taylor (Raised Rowdy) – Whose career do you admire most and hope to pattern yours after?
Claire – “That’s a tough one as there is so many. To me, Bob Marley is unprecedented in the way that his music will forever and ever influence the atmosphere of any room its’ played in. Billy Currington, in my opinion, also does a fantastic job of balancing salt water and songwriting.”
Taylor (Raised Rowdy) – What’s the best piece of advice you’ve been given since entering the country music industry?
Claire – “The best advice I’ve been given is actually from my mom. She always says, “if you don’t question yourself, no one else can.” This advice has stood the test of time in the country music industry. When I’m making music that I adore and feel confident in, people get excited.”
Taylor (Raised Rowdy) – What was it like to shoot your first music video?
Claire – “It was SO fun!! We went to two of my favorite places in my home state of California, Santa Cruz and Santa Barbara to film and I had an absolute blast. I’d filmed things for fun with my friends growing up and it felt really surreal knowing I was filming something to put out for the world to see! Fun fact— in the scenes where I’m standing in the water with my guitar, there were two little kids dancing with my dog, Captain and asking me questions while I was attempting to focus on singing. I couldn’t stop laughing, it made the whole day.”
Taylor (Raised Rowdy) – What’s next for Claire Wright?
Claire – “So very much! More songs and videos to come ever so soon. I hope to continue to see the world and make music that spreads sunshine. There may or may not even be a reggae remix on the horizon!”

I really resonate with Claire and her vibes in country music – being a girl from the north I am always in need of a beach and this song captures every emotion of the feeling of needing to always be by the water. Keep an eye out for what’s coming next with Claire… I promise you will not want to miss it.

Keep up with Claire: