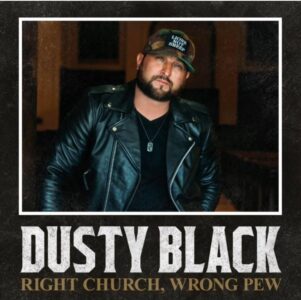 Memphis, Tennessee native Dusty Black has taken off the corporate “black” tie and suit to play his hand at a music career. The decision to pursue music came after years of honing his performance and songwriting skills. Black’s love for country music, however, came about long before his recent announcement of a new career in entertainment.  The inspiration came from Floyd “Junior” Black, Dusty’s grandfather, who once played banjo and guitar in Johnny Cash’s band, and his own father, Allen Black.

Black’s father was and still is an important part of his life and as timing would have it, part of the reason why Dusty is releasing his debut single tomorrow, October 23, 2020. Black lost his father suddenly to cancer exactly one year ago to the day. While it made him realize how short life is, it also reminded him how important it is to do what you love and chase your dreams. Black recalls sitting on the back porch picking the guitar, talking about life and growing up when Jordan Walker (co-writer) sent him the song one Sunday after church. Growing up in the Black household was cut and dry; it didn’t matter what you did on Saturday night, you better get your butt up and get to church on Sunday morning. The song hit home for Black in more ways than one.

“I really appreciate songs that are real and raw and speak life’s lessons – I think we’ve all been there in that fight between doing what’s right and doing what’s fun” said Black. “When I first heard the demo and played it for my dad, I knew it would become our favorite to play together. I lost my dad to cancer last year and I knew our song, ‘Right Church, Wrong Pew’ had to be the first one I cut as an artist. I’m excited to release it in his memory on the one-year anniversary of his passing.”

Black’s debut single was written by three industry vets – Michael Heeney, Kenton Bryant, and Jordan Walker. The title started as nothing more than a memo in Walker’s phone, as many great songs do. Ideas were thrown around but Heeney quickly made work of the title Walker brought to the write. Bryant dug around and found some melodies to fit the emotion of the song and it all came together in a matter of hours. In true “Nashville fashion,” Black reached out to Walker after a night out of drinking and discussing the music biz and asked if he had any demos he could listen to. Black knew this was the one from the first listen. Produced by country super-star Colt Ford and Grammy award-winning producer Noah Gordon, the up-tempo track sings praises of trying to live right and not “like Saturday night was the last one I got.” 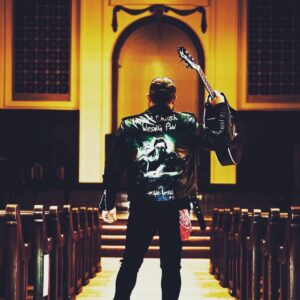 Dusty Black is no stranger to new endeavors and pouring his heart and soul into something he is passionate about. According to Walker, “DB has the biggest go-getter attitude of anyone I’ve ever met. The guy works crazy hard to achieve his goals; inspiring to say the least. I remember after his dad passed, he went through a little funk, we all do. I watched him fight through it to keep his girls happy and keep his company thriving and it was unreal to watch. His drive is unreal and his passion leaks into everything he’s involved in.” Black founded Black Tie Moving in 2013 and now has corporate locations in over 17 cities around the country. Recognized by Inc. 500 in 2017, ’18 & ’19 for exponential year over year growth, it’s no secret Black is motivated, driven, and inspired by success. Surrounded by a team of likeminded individuals and artists, Black is determined to create and deliver music that he and his team are proud of. Plans to release even more music are in the works and we can expect to see a multi-track EP in early 2021.

Check out the performance video premiere of Dusty Black’s debut single, “Right Church, Wrong Pew” and be sure to follow him on all platforms for the latest on music and touring.