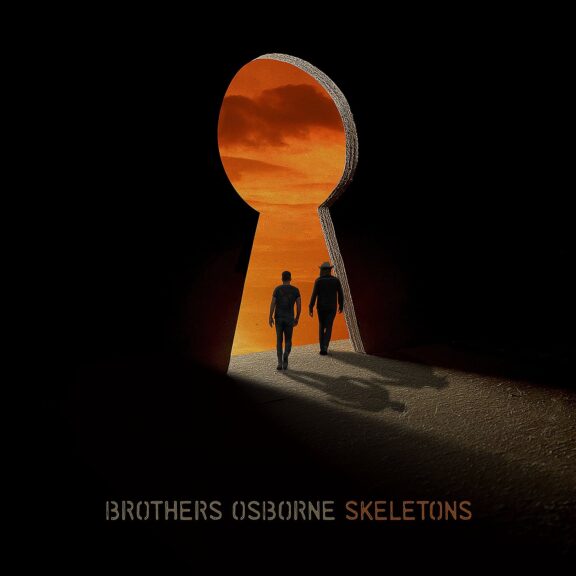 Brothers Osborne’s Skeletons Has Meat on Its Bones: Track by Track Breakdown

Brothers Osborne recently released the much anticipated follow up to their stand out album Port Saint Joe. We spent some time with their latest project which features the single “All Night,” which you can hear now on Raised Rowdy Radio. Here’s a deep dive into that and the other tracks on Skeletons.

The album starts strong with an especially funky song. When we get to the chorus, it becomes clear that the lyrics of this song are structured very intentionally. Brothers Osborne oscillate between using the phrases “Lighten Up” and “Lightin’ Up” throughout. Its cleverness is in its simplicity. In a way it feels surprising that this song hasn’t already been written, but their particular handling of the double entendre gives off distinct coolness that it’s hard to imagine anyone else pulling off as effectively. The message to slow down and relax in a world that’s gone crazy feels timely and much needed.

Next, we’re treated to a high energy grooving track. This song sits well within Brothers Osborne’s discography as it gives similar flavor notes to what we’ve experienced on “It Ain’t My Fault” and “Shoot Me Straight.” “All Night” is a lot of fun on a surface level, but its biggest strength is how effortlessly it conveys the strengths of this band. Both TJ’s distinctly rich vocals and John’s impressive guitar licks are on full display. While this is true for the full album, the inherent catchiness of this song is certain to expose that sound we already love to new fans.

All The Good Ones Are

It’s no secret that Brothers Osborne have a strong rock sound to their country and that has never been more apparent than on their early tracks on this album. As we’ve seen in the first two tracks, this song is a lot of fun as a studio recording and has us craving the opportunity to hear in a live setting. This song has a lyric that perfectly encapsulates the album up to this point: “demolition right from the start”. Again, the lyrics are a strong point on this track, tightly packed and hitting distinctly with each phrase.

I’m Not For Everyone

This song has a very positive message which is consistent with many of the other songs on this album, but its chill and beachy composition make this song stand out. It feels reminiscent of Port Saint Joe in the best way. The lyrical choices create a very clear mental image for this piece and, again, feel very deliberate. There is a possible Easter Egg in this song referencing their touring with Eric Church early in their career with the line “If I was a church, I’d be hanging with the sinners”. While this could easily be a coincidence, it is certainly something that will be appreciated by the overlapping fan base.

The title track does an excellent job of expanding a theme across both the vocals and composition. The introduction feels especially eerie, matching the subject matter of the song. A stark contrast from the last track, “Skeletons” proves that even when the band experiments with different styles, they know exactly how to play to their strengths. John’s guitar finesse is front and center in the solo featured in this piece, as is TJ’s distinctly deep voice. This song (and the album as a whole) feels like it was written to be experienced live. Although current events are preventing that from happening, the music gives a much needed opportunity to mentally escape from the present reality into an arena setting.

Back on the Bottle

On an album that has a lot of country influenced rock songs, this song is all country. It’s a very classic break-up and drinking song that is true to the roots of the genre. It showcases a very distinct aspect of Brothers Osborne’s appeal. They consistently create music that simultaneously throws back and breaks ground. This song in particular fits in easily with music from revered country music outlaws. It feels like an old school saloon tune which is complimented especially by its conclusion of bar clammed and subtle ivory keys. Completing the A Side of the album with this track shows that the album format was very well honored in the structural choices of this album. The juxtaposition between this and the next track are presumably best appreciated on vinyl, but to the right listener this can be appreciated on any medium.

Brothers Osborne approaches the second side of this album very differently. There is an underlying ethereal feel to this song that creates a exquisite metaphor for being haunted by a lost love. The light handed backing music draws the listeners attention back to the lyrics, which again are very strongly constructed. Since the wrap up on the last track hints that this album is intended to be listened to in order, the placement of “High Note” after “Back to the Bottle” becomes extremely important. “High Note” gives an honest and sobering look at the heartbreak from the same breakup that we just witnessed through a drinking song. Hearing this more private reaction immediately after the public response one might have to a breakup allows for this song to cut more deeply.

This song is an absolute masterpiece. Brothers Osborne has never been shy about long guitar solos, as evidenced in their extended version of the popular track “Stay A Little Longer” and guitar breaks in live sets. John Osborne is easily one of the most skilled pickers in country music today and deservedly finds himself consistently recognized alongside other current esteemed guitarists, Brad Paisley and Keith Urban. It’s refreshing that this solo is given its own spotlight and impressive how it bleeds into its sister song on the next track.

Once again, the placement of this track and its relationship to the previous track show that Brothers Osborne’s focus was on carefully constructing an album more than producing radio singles. Converse to “High Note,” “Dead Man’s Curve” uses simpler lyrics to keep the attention on the guitar after “Muskrat Greene” functioned as a lightning rod. This is a well used opportunity to display how well rounded this band really is. While both of the brothers’ skill sets are omnipresent throughout their catalogue, putting this two part track alongside “High Note” truly gives them each a moment in the sun.

Make It a Good One

This song is another high point on an album that is full of high points. Similarly to the early tracks on the album, this is a very positive and much needed reminder to live life to the fullest. The song is well composed, but its thoughtful and timeless message truly make it stand out. Their choice to debut this song during a quarantine special on CMT underlines the need to slow down and appreciate what we can in life. The band shows their heart in a lot of this album, but this is especially true in the deeply humble approach to “Make It a Good One.”

The band underscores the positive message of the previous track once again by painting across a broader canvas as they have done throughout the album. It also calls back to what we heard much earlier in “I’m Not For Everyone.” They bring decidedly more funk to this track than some of their other happy go lucky songs, but in a way that suggests that being a positive person that doesn’t hate other people has an element of rock and roll coolness to it. This is a parting reminder of the inherent goodness of the artists in this band and comes off as an optimistic picture of a better world in times that otherwise feel very divided.

Similarly to the first side of this album, the final track stands out as a distinctly country night cap for the album. It’s almost impossible to listen to this one without thinking back to the brothers unexpectedly winning their first CMA. It’s clear that not only do they remember where they came from, but they deeply appreciate the perspective that it has granted them. Even though they have evolved from the days of being an underdog, they have stayed true to their roots. That’s the secret ingredient not only to this particular album, but the band as a whole. Thank you for the music, guys. Rock on.