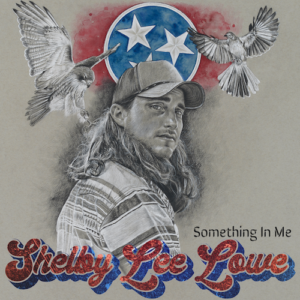 If you’ve listened to any of Shelby Lee Lowe’s recent releases, it’s immediately clear that the rural Tennessee native has his own distinctive style: flat-out, true-blue country music that’s heavy on the honky-tonk and easy on the ears. It’s a current that runs through all three tracks on his new EP Something In Me (releasing tomorrow, October 16), as Lowe explains. “Andy [Producer Andrew Wills] and I talked about this project having a traditional, honky-tonk country sound that was similar to records we loved from the 70s, 80s and 90s by artists like Merle Haggard, Dwight Yoakam, Johnny Lee and Ronnie Milsap. We wanted twangy Telecaster Guitars, and a heavy dose of steel guitar and keys.”

Mixing old-fashioned stylings with classic country heartbreak, Lowe checks all of those boxes in “You’re Not Gone,” a track off the EP which we’re proud to premiere a day early here at Raised Rowdy. Though Lowe didn’t write the track, he felt an immediate connection to it.  “When my producer Andy pitched me this song my eyes lit up and I knew I had to record it. Ed Williams wrote this song by himself and had a really kick ass demo made for it in the early 2000’s. The song was up-tempo and fun with a Bakersfield country style of writing and influence that made me fall in love with it. We went into Ryan Youman’s Amber Sound Studio with Sol Philcox, Tim Galloway, Andy Ellison, Wil Houchens and Grady Saxman and just let them go straight honky-tonk on this song. It was a beautiful thing to witness. It’s songs like this that made me fall in love with country music.”

While the lyrics of “You’re Not Gone” dance through flashback memories of a long-gone lover, it also has a sound that drops listeners right into a shadowy neon barroom where pool balls crack together in the background and boots shuffle over scuffed wooden floors. Throughout the track, Lowe’s rich and twangy vocals ring out over a whirlwind of guitars and pedal steel to recount the constant battle between the head and the heart that breakups often entail:

“I go about each day just like I used to

I’m fine till I crawl in our bed alone

I wake up every night

To find I’m sleeping on your side

Listen at the link below and be sure to pre-save the EP here. You can also follow along with Shelby Lee Lowe on Facebook, Instagram, or his website to keep up with current happenings.