Following the 2019 release of his album Wanderin’ Fool, Indiana native David Quinn found himself ready to let go of everything that was holding him down. Luckily for us, that release came in the form of Letting Go, his new full-length album that’s set to release on October 23. In advance of that release date, Quinn and his team have graciously allowed us to premiere one of the singles from the project, “Ride On,”  just a little early. 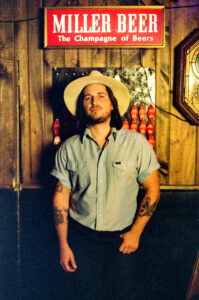 Packed with vibrant instrumentation and undeniable gusto, “Ride On” has a commanding energy that leaves listeners breathless. Beyond the steel guitar flourishes (courtesy of Jeff Lyman) and images of running down an open road or catching a southbound train, the track has a decidedly western feel to it. Driven by raring guitar licks and dynamite drums, the single leaps to life, busting right through the saloon doors only to leave them swinging in the wake of guitarist Laur Joamets (known for backing Sturgill Simpson) and drummer Dillon Napier (who plays with Margo Price). Before the dust even settles, Quinn jumps in with his clear, rangy vocals to immediately set the tone for the single: “Lord I’ve been rambling around this old town/sick and tired of waiting like a dog inside a pound.”

Simple and expressive, these lyrics in particular mirror Quinn’s state of mind when he wrote the track, as he explained: “‘Ride On’ is a song about being tired of where you are both physically and mentally. Like a lot of the songs on this record, it’s a song about leaving. When I wrote ‘Ride On,’ I needed a change with both; I was ready for a different view. I realized that the journey – to and from – is the most important part, and I think I am forever chasing that. It’s all about the ride there, and that’s all that matters until you take off again. That ride is what keeps me going each day and what inspired this song. ‘Ride On’ also touches on making these changes with confidence and not looking back.”

Bottom line, this punchy, enthusiastic single is enough to make anyone entertain daydreams about giving in to the siren song of the open road. Give it a listen here, and make sure you mark your calendars for the album’s October 23 release if you like what you hear.