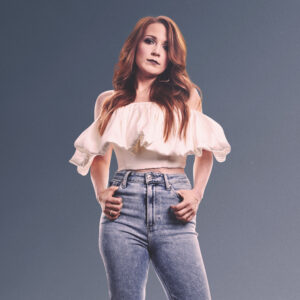 Sarah Allison Turner was just fifteen when she became a part of the Nashville scene. She grew up in a musical family and recalled playing a song for her dad as a young teenager; he responded by telling her “if you write a few more, I’ll take you to Nashville.” Her first stop was an audition at The Bluebird Cafe. “The Bluebird is my favorite place… that’s the first place that I played” she tells us. She started traveling from her home in West Virginia to Nashville on trips that became more frequent as they continued. “I was born and raised in West Virginia. And I make trips to Nashville for writers nights and things like that down here. I knew pretty quickly that Nashville is where I wanted to be. So in making trips here and starting to build relationships and stuff, I found Middle Tennessee State University and transferred there as a sophomore. That was kind of my excuse to get down here. I studied music business there graduated and the goal had kind of always been to do music. I was thankful that I had kind of a way to get here without just like moving here cold turkey.”

It was with a fellow Middle Tennessee State alum, HARDY, that Sarah got her first cut and single on Tyler Farr’s “I Should Go To Church Sometime” (Brinley Addington also co-wrote on this single). She shared the story of finding out that another one of her songs, “The Older I Get”, had been cut by Alan Jackson: “He is definitely someone that I grew up listening to and to have somebody like that record one of your songs, I just feel like it’s what you hope for when you move to Nashville, you know, that people will love their songs enough to record them. So for Alan to be one of those, it’s just crazy. It’s crazy how that came about, too. Because a lot of times when a song gets recorded, they put it on hold, they end up going in recording it, then you’re kind of holding your breath hoping that it actually comes out or makes the record. With him, we just knew that he loved it and he put it on hold. Then I literally got a text message on a Friday and said your Alan cut is out.” She also called out Walker County’s “The Hamptons” as one of her favorite songs that she’s written on (co-writers Autumn McEntire and Riley Thomas). “I love what we were able to create that day. I feel like it’s such relatable lyrics. It’s it’s definitely one of those that I’m the most proud of.” You can find these and more songs that Turner has written on her Spotify playlist “Songs I’ve Written”.

Additionally, she has put out two singles this year that she recorded—“Save Me the Trouble” and “Never Gonna Break Up.” She recently released a music video for the latter. The inspiration for this video came from a high school project, and she told us some of the background behind the footage used as a backdrop. “My school had this thing where you had to turn in a senior project before you graduate and you had the whole year to work on it. Like it wasn’t anything they got sprung on you. You know, mid semester, like you knew the start of your senior year, by the end of the year, you had to have this project done… my subject was something along the lines of ‘does music influence mood?’ And so with that, you we were supposed to write like a 10 page essay, to give a presentation, provide a visual, and then turn in a product. And the product could be anything you wanted, but you had to spend 15 hours on it. But that was the only criteria.”

This video perfectly captures the nostalgic feeling showcased in the song’s lyrics (co-written with Jameson Rodgers and Riley Thomas), and she told us a little bit about what went into writing this song as well. “That was kind of one of those days where we just we kind of tapped into that nostalgic reminiscing on young love and being naïve to the fact that love can break your heart and we were like, how do we write this in a way where it’s like, you know, kind of cheers to all of those, like, first time feelings and not really knowing anything different.”

She has been doing weekly livestreams with guests artists from her Instagram page throughout quarantine called Turn It Up. “Doing them by myself felt really intimidating, so I just had the idea to pull in some friends. Throughout the spring, I think I did maybe like six or seven and I would have two guests on each week and I’d do them every week. I paused for a minute and then a couple weeks ago I started up and kind of repackaged it as the Turn It Up virtual tour and, and brought in some of the people who did it before and then some new people too. But it’s a good excuse to see people and it’s just nice to have something like oh, I have something to look forward to.”

Sarah Allison Turner also has a new single coming out on October 2nd called “The Idea of You” which she wrote with Matt McGinn and Daniel Ross.